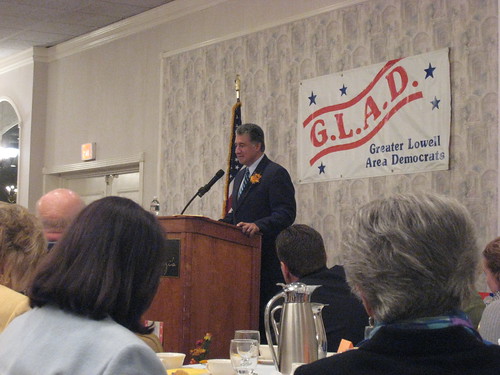 The Greater Lowell Area Democrats honored State Senator Steve Panagiotakos with the group’s “Distinguished Democrat Award” today. Three Democrat candidates, all on the ballot a week from Tuesday and all veterans of the 2007 special election to fill the Fifth Congressional seat, began the succinct speaking program.

First up was Barry Finegold said that Steve Panagiotakos was an inspiration to all who have served with him at the State House. Eileen Donoghue said she was honored to be the Democratic nominee in the First Middlesex Senate District (now held be Panagiotakos) and assured everyone she knew what big shoes she will have to fill should she be successful on election day. Congresswoman Niki Tsongas said that Steve Panagiotakos has always been a problem solver who has always made a difference. She said she was grateful for Steve’s level-headed approach during these tough economic times. He always exhibited tremendous integrity and everyone who deals with him enjoys the experience.

UMass Lowell Chancellor Marty Meehan formally introduced Panagiotakos. Meehan said that Steve truly does love Lowell and fully understands the connection between the state’s system of higher education and our economy (80% of state college graduates stay and work in Massachusetts). Meehan credited Panagiotakos for the funding for two new buildings on the UML campus and allowing state colleges to retain tuition paid by out-of-state students at the campus so that the schools can be more entrepreneurial.

Beyond such direct assistance to UMass Lowell, Meehan said that Panagiotakos’s fingerprints are on every major development in Lowell. He recalled how Governor Patrick recently said that Steve’s departure from the legislature is a great loss to the state. Meehan said that Steve still has much to contribute; that’s the plus of his leaving politics while he’s still in his prime. He ended by saying that Steve Panagiotakos has made a difference in the lives of generations to come.

Once Steve got a chance to speak, he offered two pieces of advice to other elected officials. He said always remember that it’s not your seat; it’s the people’s seat. And remember that every one of us is replaceable; Democracy will go on without us. If you remember those two things, you won’t lose touch with your constituents. After you’ve been on Beacon Hill for a while, there’s a risk that you will substitute the institutional view of things, but you have to represent the views of the people who elected you. Steve said that all the awards he’s been receiving lately would more appropriately be directed to the many family members, friends and supporters who have helped him along the way.

Steve continued by saying he was proud to be a Democrat but that the Democratic Party faces many challenges. We have to welcome everyone; we can’t afford to marginalize anyone and have to find a way to reach compromises. He said that compromise isn’t selling out, it’s an attempt to keep moving towards your goal. Using a football analogy, Steve said the route to success was not throwing a Hail Mary pass each time, but to keep moving the ball forward, rolling up a series of first downs. He warned of the sentiments driving the Tea Party. He said those folks shouldn’t be written off as extremists but we should try to understand what’s gotten them so angry and ask why aren’t they with us. He concluded by saying we need to be tolerant and civil, and when we have power, we must do what’s best for all American people.