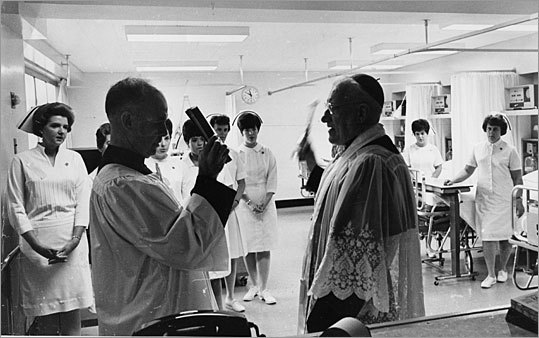 This is a vintage photo – circa 1967 – of  Richard Cardinal Cushing – Archbishop of Boston – blessing a new unit at Carney Hospital. Cardinal Cushing led the way to building and establishing Bon Secours Hospital – now  Caritas Holy Family Hospital – in  Methuen to serve the need for Catholic heathcare services in the Lower Merrimack Valley.

In today’s Globe Robert Weisman continues his reporting on the process of finalizing the sale of the Caritas Christi Health Care system to Ceberus Capital Management. Attorney General Martha Coakley approves the sale with conditions. The Massachusetts Public Health Council approved new licenses for the six Caritas hospitals with minor conditions. The pending sale  awaits the ruling of the Massachusetts Supreme Judical Court – a requirement when assets of a non-profit entity are transferred to a for-profit entity. Apparently, last August the Vatican weighed in with a “no objection.” The Vatican has standing in the process because – according to the Globe article – Steward Health Care Systems LLC needed more that the state licenses to operate these hospitals.

“… under the Caritas bylaws — amended in 2008, when the system became an independent nonprofit — its longtime owner, the Roman Catholic Archdiocese of Boston, retained the right to approve a sale.”

Even with the stewardship agreement, which included an escape clause that would allow Cerberus to end the religious affiliation under some circumstances, the deal still required the church’s sign-off.

Terrence C. Donilon, spokesman for the archdiocese, yesterday confirmed that church authorities had given their approval, subject to the conditions outlined in the asset purchase agreement, which included the promise to keep the hospitals’ Catholic identity.

“We look forward to seeing the process completed for the good of Caritas, its patients, employees, and the general public,’’ Donilon said.

There are some Catholic groups who still oppose the sale of this Catholic healthcare system – including the “Coalition to Save Catholic Health Care.” R.T. Neary the coalition Chair claims he and other critics will continue the fight against the sale.

Neary, chairman of the Coalition to Save Catholic Health Care, cited the stewardship agreement’s escape clause, which allows Cerberus to back out if it determines complying with Catholic guidelines is “materially burdensome,’’ a phrase that is not defined.

If it ends the religious affiliation, the new owner would have to pay $25 million to a church-designated charity and remove the hospitals’ Catholic symbols.

“There’s no way we can understand how the archdiocese would approve anything that Cerberus would be involved in, Neary said. “They have no interest in the religious identity of Caritas Christi, which is the heart of what the system is about.’’

The end of this proccess seems near with all but one of the necessary approvals in place. The majority of the stakeholders seem satisfied. The discontented don’t really have a place to go now but stay tuned as the process plays out to its  conclusion. This sale could be completed by November 1st – if the SJC moves forward with its approval.