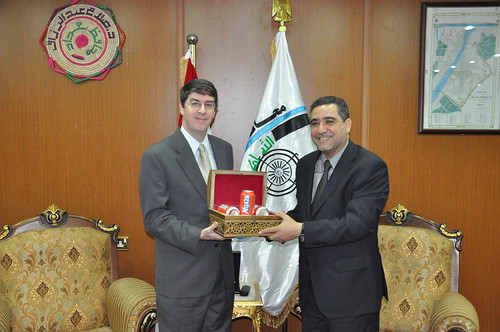 The above photo shows Mehmed Ali, a friend who continues to serve the US government in Iraq, presenting Dr. Salah Abdul Razak, the Governor of Baghdad, with several cans of Moxie as a gift to recognize the end of the month of Ramadan.

No matter how far from Lowell he travels, Mehmed never forgets his city. The Moxie is a prime example – it was invented in Lowell by a man named Augustin Thompson.

Thompson was born in Union, Maine on November 25, 1835. He fought in the American Civil War, attaining the rank of Colonel. After the war he went to medical school and came to the bustling city of Lowell to establish his medical practice. To better treat his patients, Thompson began concocting medicines and tonics. In one that became especially popular, he used the bitter tasting gentian root which was native to South America. To better market this tonic, Thompson said he was introduced to the medicinal properties of this root by an old army buddy who subsequently traveled through South America. The fictional army buddy’s name was Lieutenant Moxie. “Moxie Nerve Food” became so popular that Thompson abandoned his medical practice and devoted all of his efforts to the production of this tonic. As the new century drew near, government regulation of medicines grew more severe, so Thompson stopped selling the concentrated tonic altogether and instead mixed the syrup with soda water which yielded the soft drink that is still available on grocery shelves today. Thompson died in Boston on June 8, 1903 and is buried in the Lowell Cemetery.

Mehmed looks great in this photo. We wish him well and are anxious for his return to Lowell but understand the important work he is doing in Iraq. He also asked us to thank Bob and Ann Marie Page for keeping him supplied with Moxie from Lowell.