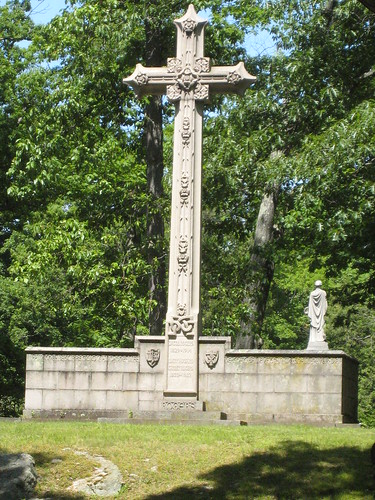 As Marie points out in her earlier post, today is the 50th anniversary of the death of Edith Nourse Rogers who represented Lowell in Congress from 1925 to 1960. She is buried alongside her husband, John Jacob Rogers, who preceded her in Congress (serving from 1913 until his death in 1925), in the Lowell Cemetery.

Although a Republican, Edith Rogers was an enthusiastic supporter of Franklin Roosevelt’s New Deal programs. During World War Two, she filed legislation that created the Women’s Army Corps (WACs) and was one of the co-authors of the GI Bill.

A participant in today’s Lowell Cemetery tour explained that he was a young man living near the cemetery on the day of Rogers’ funeral. Hundreds of soldiers from Fort Devens attended. Their trucks were all parked atop Fort Hill and the troops lined Knapp Avenue and the cemetery roads from Rogers Street all the way to the grave site.