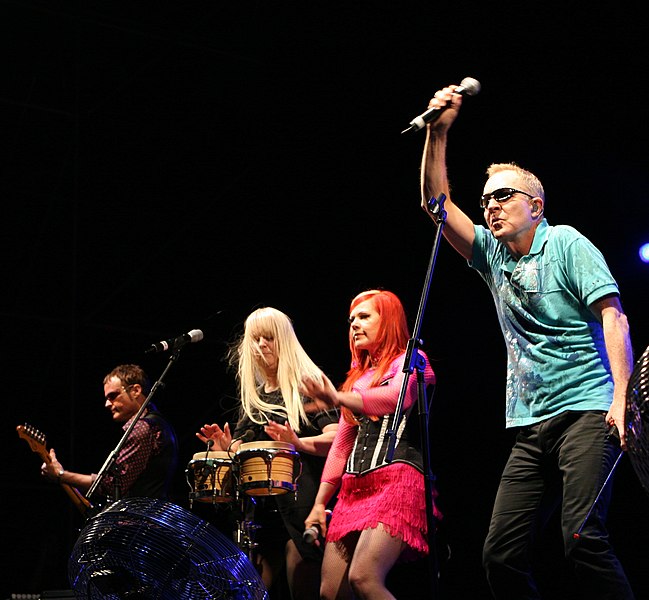 You don’t have to say a lot more than “the B-52s played Boarding House Park last night.” They raised high the steel roof beams of the trademark pavilion set against a wall of brick and tall windows at the Boott Mills. The moon floated over downtown at about 7/8ths round and the air was cool and still. It was a standing dance party for the Lowell Summer Music Series crowd, something I haven’t seen often.

The iconic band of good-sport entertainers played all the fan favorites, plus a few new songs. The band of bass, keyboards, lead guitar, and drums superbly powered through vocal-driven numbers. Propulsive is a word to use here. Shouting is another word to use. Fred Schneider joked at one point about the group’s ballads. I didn’t hear much of that. Little Richard-type shout-singing from the 50s is more like it. And a kind of campy pop gospel holler mixed with ’80s’ techno-rock. They are from the South, after all.  The sound level all night seemed slightly over the top, but maybe it’s just my older ears.

Cindy Wilson and Kate Pierson raised the roar in the park with an extended version of “Roam,” and the whole crew closed the 90-minute show with a souped-up version of  “Love Shack.” They came back for a two-song encore, the cosmically goofy “Planet Claire” and cellar dance classic “Rock Lobster.” The last words from the stage by (was it?) guitarist Keith Strickland were a big shout out to Lowell’s own “dead beat”—“Thank you Jack Kerouac, wherever you are.”

2 Responses to ‘Love Shack’ by the Trolley Tracks