The recent posts about digging for Irish roots in the Acre and Hollywood gossip about the Ward movie “The Fighter” reminded me of Tom Sexton’s poem from his book “A Clock With No Hands.”—PM

not since I moved away from Lowell.

He has my uncle Leo’s fighter’s face,

Staggered by a right, he picks up the pace. 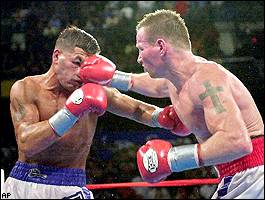