that Candid Camera actually began as a radio show called Candid Microphone. In June of 1947 Candid Microphone hit the airwaves with a bang. Its quick success prompted the shows producer to bring the concept to TV on August 10, 2010.

As a kid in the 1960’s watching Candid Camera was a ritual with my friends and family. I remember one Sunday night sitting in the living room laughing hysterically as a mailbox talked to an unsuspecting passer-by. The next day this classic routine was the talk of the neighborhood.

And Candid Camera had many other “classic skits”: There was the one where a person entered an elevator that only moved sideways, and another where a forklift removed a store wall during business hours, and another favorite of mine…a golf green without a hole. The list and memories go on and on.

Candid Camera’s unique approach to documenting unexpected elements of human behavior was inspired in part by Funt’s background as a research assistant at Cornell University. Here Funt aided psychologist Kurt Lewin in experiments on the behaviors of mothers and children. He also drew on his experiences in the Army Signal Corps where he was responsible for recording soldier’s letters home. 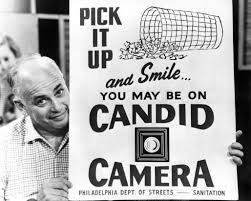