The entry below is crossed posted from Marjorie Arons-Barron’s own blog.

Vermont village of Plymouth Notch when word arrived that President Warren Harding had died. By the light of a kerosene lamp, John Coolidge, who was a notary public, swore in his son as the 30th President of the United States (at the desk pictured here). A visit this past weekend to that spare birthplace tells a lot about the Puritan values that helped shaped New England and, for a time, this country.

Living the good life back then was said to be all about thrift, honesty, hard work and self-reliance. If we talk about that today, we’re taken to be anti-welfare and unenlightened. But the two don’t have to be mutually exclusive. And understanding Coolidge’s remarkable story does create an appreciation of simpler times. 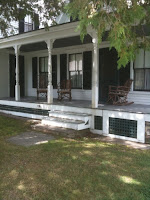 The remote town had a one-room school house for 23 kids aged 5 to 18, his father’s country store, a post office, meeting house and half a dozen homes, surrounded by farmland. Coolidge’s father was a merchant, a farmer, a legislator, and ran a cheese factory. The boy helped in the fields and the house and attended school committee meetings with his father. Imagine a father trying to do that to his son today. Calvin is quoted as saying, “It’s hard to develop a better surrounding for the growing up of a boy than I had.”

He went away to Black River Academy, then Amherst College, from which he graduated in 1895. He practiced law in Northampton and began his amazing political career: state legislator, Northampton mayor, state senator, state senate president, lieutenant governor, and twice governor of the Commonwealth..

In 1919 he gained a national reputation when he called out the National Guard to quell a police strike, saying the police had no right to strike against public safety. The attending publicity propelled him the following year to Vice President on the ticket with Warren Harding. Then –on August 3, 1923 –he became President of the United States. He was elected on his own in 1924 but declined to run again in 1928 saying it was too long for one man to serve.

As governor, he was known as a progressive. He supported women’s right to vote and fought to improve child labor, worker wage and safety laws. But in the White House he opposed such social reforms, believing them to be the responsibility of state and local governments. Governing in the Roaring Twenties, he eschewed regulations that restricted business activity. (“…the chief business of the American people is business.”) On his watch, federal spending didn’t increase, the federal debt dropped and taxes were eliminated save for the richest two percent. It made him a hero to Ronald Reagan and other small government advocates. Consistent with Coolidge’s philosophy, he vetoed farm subsidies, saying, “farmers never have made much money. I don’t believe we can do much about it.” How much his laissez faire attitudes contributed to the Depression is the subject of debate. His tenure was a breath of fresh air compared to the corruption of the Harding Administration.

Known as “silent Cal” because of his reserved personal demeanor, he remarked “I have never been hurt by what I have not said” and “Four-fifths of all our troubles would disappear, if we would only sit down and keep still.” Nevetheless, he didn’t run from the press, and met with reporters more often (549 press conferences) than any other president in history.

He spent almost every vacation at home in Vermont with his father, with the top floor of the post office serving as the summer White House.

With the assistance of only a secretary and stenographer, he attended only to “national business that wouldn’t keep.” For relaxation, they did farm work. Coolidge was said to “like pitch forks better than golf clubs.”

Some of the hot issues he had to deal with, from international responsibilities to domestic pressures, are still around today, and his Presidential record is mixed. He granted full citizenship to American Indians and opposed the Ku Klux Klan, but took a hard line on immigration, signing a law barring Orientals from the country, (though he expressed regrets). And, as a foreshadowing of Katrina, he was much criticized for his slow response to the Great Mississippi Flood of 1927 and his disinterest in federal flood control.

Standing in the peaceful quiet of Coolidge’s homestead on the same day as the opulent Clinton wedding in Rhinebeck, remembering stories about the personal excesses of elected leaders, and reflecting on how vitriolic and unproductive our partisan politics has become, we are aware how much the world has changed. It is sobering to remember that even during the Roaring Twenties, a time of celebrity and excess, a leader could comfortably represent, for better or worse, traditional values of rectitude and modesty. It is said of him that he was “a man who understands the people because he never ceased to be one of the people.”

Maybe that’s what’s so appealing about Coolidge – despite my differences with his positions on many issues. It’s a missing element, the absence of which today turns so many people off to politics and politicians.

Please let me know your thoughts in the comments section below