Kudos to the City of Lowell, Greater Merrimack Valley Convention and Visitor Bureau, Lowell Festival Foundation, Lowell National Historical Park, and National Council for Traditional Arts for once again being the prime movers behind an inspiring and joyful Lowell Folk Festival.

The Sunday crowd was much smaller than yesterday’s, but it was steady and built through the afternoon. The lighter turnout actually made for better music listening for those who were there. Even in the late afternoon people could find open space at Boarding House Park to sit for a while. It didn’t feel like “appointment festival-going” wherein you had to stake out your patch of grass ahead of time. The atmosphere was more relaxed and allowed for more spontaenous sampling of the music, crafts, food, and more. At Lucy Larcom Park, the craftspeople, most of them musical instrument makers, were talking to six or eight people at a time instead of 20 or 30 at a peak crowd time.

My wife, son, and I rode the trolley from BHPark to the Mack Building Plaza on Dutton Street, which isn’t something we do often. The trolleys were stacked in twos, which doubled the loudness of the whistles as the trolleys rumbled over the tracks.  Every seat was full. I looked up at the brass plaque that read “Gomaco” and remembered all the work that went into the design and creation of the trolley system. Fred Faust, Sarah Peskin, Nancy Woods, Chuck Parrott, Ray LaPorte, Armand Mercier—and the many appointed commissioners—of the Lowell Historic Preservation Commission, US Dept. of the Interior, worked tirelessly to give Lowell an historic trolley system. Peter Aucella as LHPC executive director after Fred and Armand had his hand on the trolley project as well.  I’m pretty sure the undercarriages of the trolleys were located in Australia and shipped to Gomaco in the Midwest for fabrication—maybe Iowa? It’s still a small thrill to ride them through the downtown.

Food, you say? Over two days, I enjoyed several items. I ate a tasty kofta wrap made by the folks at the Middle Eastern booth on French Street. It’s barbequed ground lamb mixed with onion, parsley, and spices like cayenne, wrapped in Syrian bread with lettuce and tomato. (One of the volunteers, my friend Lila Lorrey, steered me toward the kofta.)  Heritage Ice Cream served up an excellent small cup of cherry vanilla loaded with maraschino cherries. One of the Lao booths provided a heaping plate of noodles on sprouts and a crispy egg roll. A cart vendor on John Street made me a specially ordered hold-most-of-the-sugar freshsqueezed lemonade with two lemon halves mixed into the chunks of ice. There were a lot of lemonade carts.  I didn’t see the limeade that somebody I know was raving about. A Laotian group with a six-foot grill at Dutton Street featured chicken-on-skewers that looked and smelled like it belonged on the Food Channel. I missed the Levasseur family from Lowell’s Cote’s Market with the French-Canadian beans at the foodways demonstration at Lucy Larcom Park.

Yo-yo artist and entertainer John Higby kept his audience laughing and cheering through his routine in front of Market Mills. I saw pictures of him with his wife doing amazing tricks and acrobatics yesterday, but he was on his own today. At one point he asked for a volunteer who could  handle a hula hoop. He called up a tiny girl who must have been eight years old at the most. She turned out to be as smooth as a semi-pro hula-hooper; everyone figured she was a plant in the crowd. Part of the act includes John riding a very large unicycle while whipping the yo-yo all over the place. He pulled off 98 percent of the tricks attempted. In my yo-yo days, I was lucky to get my clear fiberglass Duncan to “sleep” or go “around the world.” 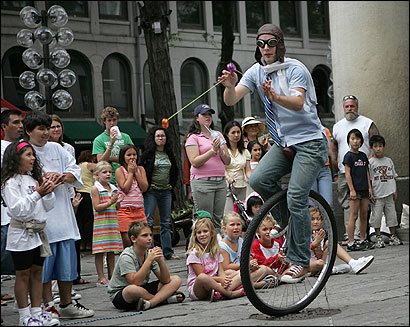 The UMass Lowell Inn & Conference Center last night at 9 p.m.  looked like Logan Airport. The vans and shuttles made a double line along the whole driveway at the entrance. The transportation end of the Festival is one of those behind-the-scenes logistical tasks that hardly anyone is aware of. The drivers and escorts play key roles in keeping everything on time and moving the busy artists in and out of the city.