The ritual has been going on since the late ’80s now, but anyone with a feeling for the pulse of the city can feel the urban heart pumping at a faster rate starting mid-week of Lowell Folk Festival weekend. It’s always the last full weekend of July—full weekend—which is why it’s coming up in a couple of days and not ten days from now. A week from this Sunday is August 1.

Crews in matching shirts positioned the huge directional sign units at strategic intersections this afternoon, signalling the transition to Festival mode downtown. In the coffee shops people talked about the weather forecast, nervously anticipating a mixed bag of shine and rain. The Lowell Summer Music Series is on hiatus to make room at Boarding House Park for the Festival action. Dedicated Festival-goers started making their game plans for the weekend, circling favorite acts on the schedule.

The days before the National Folk Festival came to town for three years (1987-89), followed by the invention of the Lowell Folk Festival, were not without large festivals in the city. There was the biennial Greek Festival produced by Transfiguration Church, which drew a citywide audience, Greek and non-Greek.  On the Pawtucket Boulevard, the Regatta Festival Committee hosted Arthur Fiedler and the Boston Pops at the Sampas Pavilion. One year there was inclement weather, and the Pops played in a gigantic tent with a big zipper on the side. In the early years of the National Historical Park, Lucy Larcom Park along the Merrimack Canal was the site of a series of small ethnic festivals on weekends (one week it would be the Irish, another the French Canadians, and so forth). A different kind of festival was the Choral Festival (that may not have been the exact name), which featured choirs and choral groups from around the city singing at Lowell Memorial Auditorium. None of these events matched the scale that has been achieved with the Lowell Folk  Festival, which is the centerpiece of the city’s annual cultural calendar.

Over the past few years, I’ve been interested in the growth of the “fringe” Folk Festival both during the regular Festival hours and later into the night. There’s even a website now for something called the Lowell Folk Festival After Dark. There’s a massive menu of acts, many of which feature local talent, being showcased at downtown pubs, coffee bars, and restaurants. The “fringe” has become very organized. This would appear to be good news for the local businesses and local musical artists, but in the future could present an audience development and funding challenge for the main attraction, which is billed as the nation’s largest “free” folk festival.  Let’s be optimistic this week and look for the Festival “pie” to keep enlarging, so that all parties putting on the big street party can sustain themselves, whether private businesses or nonprofit organizations.

When you are out there, look for the next Allison Krauss, Michael Flatley, or Beausoleil—all of whom played Lowell on their way up and up. Who remembers Wayne Toups and ZydeCajun?

The Lowell Folk Festival gave the city a mega-event whose strength is organic to the community—it is rooted in the great American mix of peoples as seen in cities like Lowell. The Festival gave form and depth to the part of the Lowell story that flows from the humanity on the streets, a layered culture that has built up through the decades like geological layers in the earth. That’s not a perfect metaphor, however, because the layers don’t stay in place; they are permeable and they migrate upward and downward, resulting in an intermingled social soil typical of what is found across the nation.

Go to www.lowellfolkfestival.org for all the news and details. See you on the streets. 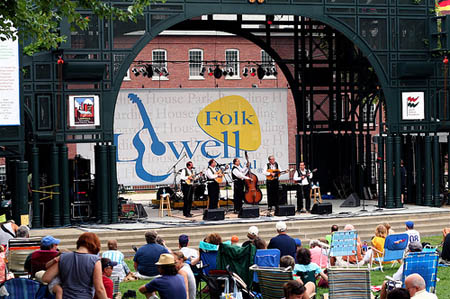