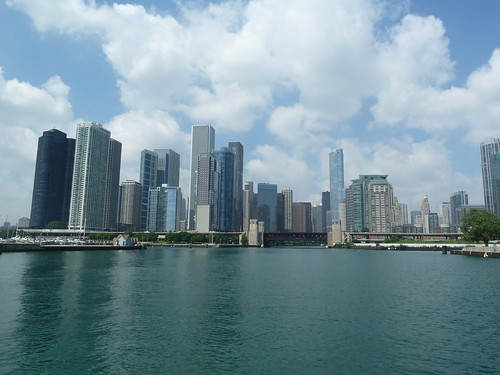 Because the period of US history that interests me the most extends from the Civil War through the start of the 20th Century, Chicago was a natural destination for a site-seeing vacation. From the 1871 fire that destroyed a four mile long swath of the city to the 1893 world’s fair. events in Chicago did much to shape the lives we live today. I’ll elaborate on that theme in future posts but for now, here are some quick impressions of life in the Windy City in the summer of 2010.

Every day was sunny, humid and 90-degree hot, a consequence of the same heat wave that’s settled over New England for the past two weeks. The parks in Chicago are amazing. There’s an almost continuous strip running from south to north (Jackson, Grant, Millennium and Lincoln) roughly separating the most built up areas from Lake Michigan. One night as I sat in Millennium Park listening to one of the free outdoor concerts that run throughout the summer, I came to admire the city for preserving these parks. How tempting to say “think of the added tax revenue we’d get if we allowed a new skyscraper to be built here on this green space” but that would yield short term gain at a devastating long term cost because the parks do so much to make the city more livable. Just this morning, several hundred residents were stretched out on yoga mats and beach towels on the grass as an aerobics instructor led group exercises – another free event.

These parks provide a fitting front yard to Chicago’s amazing architecture. You can’t visit the city without noticing the amazing variety of tall buildings throughout, but on the first day of this visit I took a narrated architecture river cruise that really unveiled the beauty of these buildings. Ironically, Chicago’s dominance in architecture flowed from the need to rebuild after the devastation caused by the 1871 fire: If you were an architect in America in the 1870s, you went to Chicago where there was an entire city to rebuild.

But I’m not alone in acknowledging the attractiveness of the city’s buildings. This weekend, beginning at 8 pm Thursday and lasting until 8 am Monday, Michigan Ave (the main drag) was completely closed from the Chicago River for several blocks so that Hollywood could film scenes from Transformers 3. This morning the Michigan Avenue draw bridge was in the up position with a wrecked car teetering on the top edge while other wrecked cars and debris were strewn about the street. Supposedly, the cost of this rental to the producers was $20 million.

And now I’m back in Lowell and back to blogging. Thanks to Marie, Paul, Tony and Andrew for their posts while I was away. While I’m getting caught up with local events, I’ll write a few more things about my new favorite city.

10 Responses to Home from Chicago