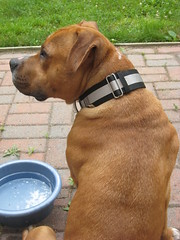 Sunday morning I did a quick post about the two stray dogs that wandered into my life. They’re gone now, but they left quite an impression. Here’s what happened. Early Sunday we were just getting home from walking our own dog when we spotted two strays down the street sniffing around. A neighbor who passed them while driving up the street stopped to alert us to their presence, identifying one as a pit bull. As he drove off the dogs spotted us and started trotting towards us. We split up, with my wife taking our dog and circling behind a neighbor’s house while I distracted the two visitors with the help of the good Samaritan neighbor who had doubled back to see if we needed any help. Neither of the dogs acted aggressive, just mildly curious. Still, they were both non-neutered males which, in my elementary knowledge of canines, put them at the top of the “be wary” cart.

Once my wife had our 55 pound female Lab inside the house, she came out and called for the two strange dogs. They came to her right away, exhibiting affection rather than aggression. Although they had no tags or ID, they wore matching collars and were well groomed, so it didn’t seem like they’d been on the loose for long. Under similar circumstances on four other occasions, our fenced-in backyard has served as a halfway house for runaway dogs. We confine them and call the police who inevitably get a companion call from a distraught owner of a lost dog. The police help make the connection and the grateful owner soon arrives to pick up the wayward pup. At least that’s how it’s worked before. As morning became afternoon and then evening, no call came. It was a mild, dry night so we just left them in the backyard. Unfortunately, every time a neighbor came home or let out their own dogs, these two broke into fits of barking which I’m sure disturbed the entire neighborhood. Throughout the night I could also hear them crashing into the gate of the fenced-in yard which gave me some insight into how they may have escaped from their own yard in the first place. When morning came – and that happened at 4:30 a.m. since it was the “longest” day of the year – they were still in the yard, eager for attention.

In one of our conversations with the police on Sunday, they told us that the animal control officer would not be summoned after hours unless the stray dog was vicious (which these guys clearly weren’t while in our company). If they hadn’t been claimed by 7 a.m., we should call back and animal control would be dispatched. The police also reminded us that if the dogs got to be too much, we could always let them go. That thought had crossed my mind once or twice – maybe they’d find their way back home – but more likely they’d keep wandering around, maybe getting hurt but definitely terrorizing most anyone who crossed their paths, not by their actions but just by their appearance. No, the wisest thing was to just keep them confined until their ride to the dog pound arrived. The animal control officer arrived promptly, put simple rope leashes on both dogs and urged them into the back of his van. That was the last we saw of them. Hopefully they’ve been reunited with their owner, but I’m more than content with having my role conclude with the departure of the animal control van from my driveway. 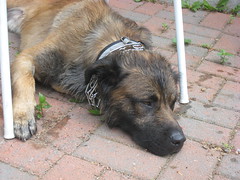