The first week at SFA was a whirlwind of adjusting to a new environment. Blanche had left Earth to land on another planet. With her peanut head and tight ponytail – the regulation hairdo for long hair – not only did she look like an alien but she also felt like one.

Twenty-six girls made up the freshman class: five “Louises”, three “Denises”, a couple of “Michelles”, “Paulas”, “Cynthias” and “Janets”. Along with Blanche, Yvette, Rachel, Rose, Clarisse, Marie, Lorraine, Gloria, Cecile and Andrea completed the group. Half were boarders and half were day-hops who travelled to SFA by bus.

Remembering all of her teachers’ names was a challenge. The nunnery cast members were all dressed in black habits and headgear which hid their faces. Height, width and gait were the only distinguishing factors. There were tall, lanky nuns like Sister Roger, the gym teacher. There were slight, slinky ones like Sister Gerald the money-collector. Blanche met them all and learned to scout out the SFA habitat.

Inspired by the Penacooks, she trained herself to observe details. She noticed that the nuns’ voices took on a high-pitched staccato when giving orders, clearly indicating that straying from the prescribed path would not be tolerated. A more angelic lilt characterized prayer time, appealing to Divine Intervention in order to obtain earthly blessings. A rote tone often came in class which made Blanche ask herself – “they have a religious calling but I wonder if all of them have the teaching vocation?”

Pace was also significant. Instructions like “be quick”, “line up” or “move along” varied according to the destination – a classroom, the dining hall or recreation. The latter was the highlight of the day for Blanche. SFA’s wooded setting soothed her. Recreation wasn’t very strictly supervised and she was able to run to her heart’s content and to feel the newly-fallen leaves crinkle under foot. She didn’t gather piles of them for high-jumping purposes however because soiling her uniform and adding pine needles to her coiffure could lead to sanction. But as soon as she was out of sight, she skipped and jumped until her bloomers dropped to her knees. “Everyone thinks I’ll turn into a ‘young lady’ in this place? Well, we’ll see about that!” 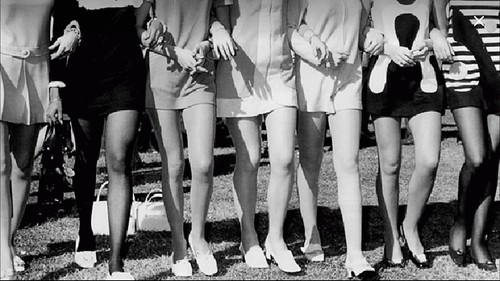 Blanche also observed her classmates. The girls were excited at the beginning of the school year. Upperclassmen appeared confident wearing their uniform skirts rolled up at the waist to obtain a leg-baring, Mary Quant look. Savvy sophomore Madeleine demonstrated. “You see, there’s a specific technique. Fold the waist band loosely, like so, to obtain the desired length above the knee. Whenever a ‘crow’ is in sight, quickly pull the hem back down.” Blanche listened attentively to veteran Madeleine while wondering what a ‘crow’ was. She didn’t ask because she didn’t want to appear too stupid. Fortunately, someone else had the guts to do it and the answer was – “Why the nuns of course! They’re dressed in black like crows. They caw like crows. They’ll bite your head off when they’re mad at you like crows.” Madeleine got all riled up and Blanche wondered if crows were really so mean. After all, the Penacooks respected them for a number of reasons. But the mini skirt technique was pretty cool and Blanche soon mastered it. Exchanges of the sort helped her get through the first couple of weeks when homesickness made her ache all over.

The boarders were settling in. It was their interest to do so as swiftly as possible. The “crows” wouldn’t have it any other way and no newbie wanted to test the extent of their patience just yet. The morning bell woke the girls at 6, then prayers at 6:30 and breakfast at 7. Blanche found the schedule hard because hypoglycemia made her uncomfortably lightheaded when she had to wait to eat.

The first meal consisted in corn flakes, porridge or cream of wheat, toast and milk. The girls unanimously found that the best part of breakfast was the home-made maple butter which they generously spread on their cold toast thereby camouflaging the stalest of bread with heavenly sweetness. Blanche loved it so much that the quantities she ingurgitated sometimes made her feel ill. But overdoing on maple butter was well worth it.

Breakfast could not commence without reading a text on the saint of the day. Each boarder had her turn to read aloud. One morning, Blanche read about Saint Matthew and his life as tax collector turned apostle and evangelist. With steady and dramatic elocution, voices had to project throughout the dining hall. It was a tough act for shy Blanche but she managed. “Come to think of it, many of these saints had quite exciting and heroic lives. A lot of martyrs, several adventurers, miracle-makers and leaders…many women too and young ones like us. Some of these saints could even have been good Penacooks!” Blanche had always enjoyed biographies of trailblazers and found that many saints fit that category. So each morning, instead of giggling during the reading, she listened. These indeed became “inspirational texts”. Although she knew that she’d never reach sainthood, because everything “forbidden” was always so alluring, discovering exceptional lives was enlightening.

From 7:30 to 8, boarders had to carry out a specific chore labelled “employment”. This could be clearing off tables, washing breakfast dishes, sweeping the dining hall, emptying trash bins, helping Sister Gerald distribute school supplies and so forth and so on. According to the nuns, being tidy and well-organized was an essential asset whether the young lady’s destiny be married, religious or single life. The refrain was “cleanliness is next to godliness” with a little “idleness is the devil’s workshop” thrown in for good measure. Blanche and her schoolmates translated the word “employment” as free-of-charge housework. Alas, there was no way out of it. “Employment” followed every breakfast and even maple butter couldn’t sweeten the pill.

Blanche’s “employment’ was tidying up Sister François’s classroom. “Sister Fran” was a pleasingly plump, ruddy-faced nun who was happy in her religious life and also the only math teacher who managed to turn equation solving into an amusing guessing game. Just seeing her welcoming eyes each morning made Blanche want to give her a big hug. She missed the physical connection with her family – horsing around with her siblings, feeling the warmth of her father’s embrace as he bid her good night and receiving her mother’s pecks on the cheek. Sister Fran’s aura somehow filled a void although hugs were never exchanged. 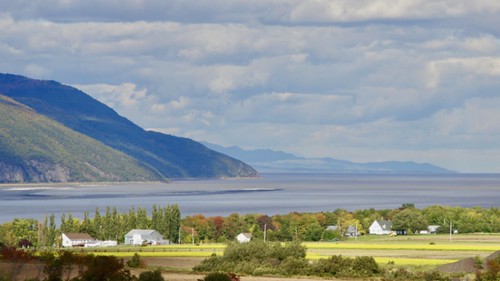 Blanche looked forward to “employment”. It wasn’t an ordeal because Sister Fran’s room was already in order. Best of all, she was a great storyteller who loved to share tales from her childhood with her ten siblings on l’Île d’Orléans, the emerald gem floating in the mighty Saint Laurence River off the coast of Québec city. As Blanche pretended to dust the classroom desks, Sister Fran described the luxuriousness of her island and the wonders of its late summer bounty – huge raspberries and blueberries, a cornucopia of giant vegetables, multicolored flowers, mile-high stalks of corn and so many of Mother Nature’s treasures. Blanche was mesmerized by the stories of the Hurons who came there to farm and fish. They called the island “Minigo” meaning “Enchantress”. That’s exactly how Blanche felt about her “employment”, an enchanting respite before the daily academic stress. When Sister told Blanche that the drops of Huron blood flowing in her veins are what made her a fulfilled and healthy nun, Blanche was a bit skeptical. But then, what did she know about Sister’s ancestors? Sure, most of them were French pioneers who came to populate “La Nouvelle France” in the 1600’s. These hardy settlers peacefully interacted with the native peoples. Discovering stories about the French men and women who traded and worked alongside the Hurons turned Blanche’s “employment” into a fascinating journey into history. Like Sister François, Blanche’s origin was French-Canadian and this was a source of great pride.

Blanche never talked about her “employment” lest she trigger her fellow boarders’ envy. When the 8 o’clock bell rang to summon the girls to their home rooms, Blanche left Sister Fran’s classroom with a heavy heart. She’d have to wait twenty-four hours before the next episodes of life on l’Île d’Orléans. The sweet anticipation would help her get through the day.