Maman parked the car in front of the stairs saying, “I should have driven up the back way. It has access to the basement so unloading your bags would have been less troublesome. But why not take the main entrance after all? It’s more impressive.” Blanche had never been to SFA and the extent of her knowledge was: all girls’ school run by nuns. She had avoided questioning her parents because the more she knew about the place, the more real it would become. Remaining in a state of ignorance was her way of rejecting boarding school. But now she had to face the inevitable.

As they climbed the steps, Maman casually pointed to the left. “That’s the novitiate wing where those called to religious life prepare for their solemn vows of poverty, chastity and obedience to the Sisters of the Cross. The novices do not mix with the students except for prayer services. You won’t be distracted by these discreet future nuns.” Maman spoke as if she were talking about the weather. 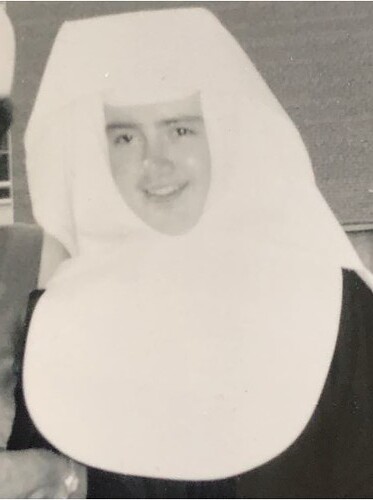 Discovering that SFA trained young women for the nunnery was a shock. The ice cream made Blanche’s stomach gurgle. “What is this? I’m going to live with future nuns?” She couldn’t believe it. Although she didn’t have anything against them and her nineteen-year-old cousin had entered the Carmel, becoming a nun was the last thing on her mind. She burped up the frozen pudding and felt queasy. Proud and stoic, she knew there was no way out so she followed her mother and waited for someone to come to the door.

A voice bellowed. “Bonjour Madame Rejean! How lovely to see you. This must be Blanche? The incoming students are depositing their trunks out back but please come in and I’ll give you a tour. That will make dear Blanche feel right at home.” This unexpected welcoming committee was Sister Gerald, the SFA bursar, accountant and money-collector. She was barely five feet tall and her dowager’s hump made her skinny neck protrude and carry her head at a forty-five degree angle giving her the profile of a vulture. She was dressed in her community’s ample habit and the gaze from her deep-set, charcoal eyes made Blanche wonder how such a small person could stare a taller one down. It was like an optical illusion.

“Let me show you around. Here is the parlor where students can receive family visits on determined week-ends.” Sister Gerald ushered mother and daughter into a long room with a polished hardwood floor and a dozen black spindle chairs placed on each side of a rectangular table. “Not very cozy” thought Blanche.

The three women left the parlor and walked down a dimly lit hallway leading to a flight of stairs. Sister escorted them to the basement. “This is where we have made our loveliest renovations. Here is our new dining hall.” Double glass doors led to a windowless area filled with ugly folding tables and sad matching chairs. At the rear was a foot-high platform with wooden tables and comfortable-looking chairs. “Our sisters share their meals with the boarders. Inspirational texts are read and proper supervision is ensured.” Blanche asked herself how much fun sharing meals with her classmates would be and what kind of food they would eat. Sister Gerald didn’t say anything about the menus.

Leaving the dining hall, they walked along the corridor where rows of new lockers had been installed. The fragrance of recently cut pine somehow softened the austerity of the somber stretch. Blanche remembered that the Penacooks frequently used this wood and that its pleasant aroma was considered an offering from the dying trees to their beneficiaries. Wondering how many had been felled to build the lockers, Blanche breathed in deeply. It soothed her a bit. “Each student has her own locker; this is another one of our 1965 investments. As you can see Madame Rejean, we have got our boarders’ well-being in mind.”

Past the lockers was a gymnasium the size of a basketball court without bleachers. That part of the basement was bright because of the floor-to-ceiling windows on one side. A rack held basketballs, badminton rackets, dumbbells and miscellaneous fitness gear. “This place could be fun I suppose. I wonder what kind of sports they offer?” Blanche brooded inwardly. Sister was proud of the gym quoting Aristotle’s “sound body, sound mind.” She flashed what was intended to be a smile to reveal a pair of yellowed dentures which slipped up and down her gums with every syllable pronounced.

“We shall not visit the second and third floors where our classrooms are disposed my dear Blanche. Discovering them tomorrow with your classmates will be your big surprise. Now to the fourth floor sleeping quarters.” Going up the cold, concrete stairs made Blanche shiver. She was no longer sweating as she entered a spacious room with two rows of twenty cots surrounded by white curtains hanging from tall steel rods. The curtains were drawn to the side and Blanche could see that some of the beds were already made. No stuffed animals brightened up the little beds.

“We have got three dormitories – Faith, Hope and Charity. This is Hope, which is yours my dear.” Sister led Blanche and her mother to the back side of the dorm and opened one of five doors. “Here is your cell Blanche. You are one of the privileged boarders who has her own space. Of course, you must abide by the rules and keep your door open at night. You will enjoy this vast room and can thank the scholarship committee for covering the private quarters fee.” 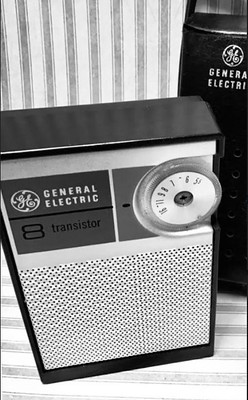 The “cell” was just that: a cot, a tiny dresser with a white enamel wash basin and a folding chair squeezed in. “I’m going to be sleeping in a closet! There’s nothing ‘vast’ in here and what’s the use of having a door if I can’t even close it at night?” Blanche was fuming inside. She had sneaked her transistor radio into her bags and had planned on spending part of the night listening to Beatles, Stones and Byrds tunes muffled by her pillow and blanket. “It’ll be hard to follow the top ten if I can’t even have my privacy.” Blanche was getting discouraged. She supposed that Sister Gerald was expecting the magic words but held her tongue thinking, “I’m definitely not going to thank someone who is pleased to put me in a cell!” Maman chirped in, “Thank you Sister. Blanche knows how lucky she is, but her timidity is getting the best of her.” Blanche was grateful to her mother for making the vulture nun turn away and couldn’t hold back a loud sigh. Her mother heard it but said nothing; neither did Sister.

As they left Hope dorm, Sister Gerald pointed towards a sink with several faucets on the wall opposite the entrance. “Every morning and evening, our boarders take turns filling their basins and then wash up in their cubicles without splashing water on our floors. The toilets are outside in the hall. Our girls take three five-minute showers a week. You will read all of our hygiene regulations in the student handbook, Blanche. We at Saint Felicity Academy are…” Sister Gerald was rattling on but Blanche didn’t pay attention because she figured she would discover the rules soon enough. The part about three showers a week had been the last straw. “I’m definitely going to be “stinky-poo” if I can’t even have a daily shower. What a great place! We’re gonna look like witches in our baggy uniforms. We’re gonna stink. We’re gonna have activities with future nuns. We’re gonna miss the hit parade. What else is gonna happen here?” Blanche became as stiff as a post and clenched her teeth so hard her mouth hurt. The tour ended as the afternoon was turning into evening and young voices were echoing in the halls. Bells were ringing and Sister Gerald announced that vespers would be held in the chapel in fifteen minutes.

Mother and daughter headed to the car and dragged the bags up the front steps. Blanche didn’t mind the effort because it meant a bit more time with someone from home, even if that someone was leaving her in this foreign place. “I’ll drop by to see you very soon Blanche and I’ll bring you some more things. Don’t worry; everything will be fine. You’ll make new friends and adapt quickly. And just think of what you’ll be studying: Latin, algebra, biology, art and even embroidery. Isn’t that exciting?” Blanche could see that her mother was trying to appear happy-go-lucky but it wasn’t working very well because her eyes were turning pink and her voice was cracking. That saddened her and she felt like begging to go back home. Instead, she took both of her mother’s hands, tenderly kissed them and placed them on her face. She left them there remembering how Maman had often done that when she was a little girl. Blanche guided her mother and, for the first time, they switched roles.

Finally, Blanche whispered: “I’ll see you very soon. Can you bring Antoine, Byron and Marguerite with you? They will miss me I think.” Maman let out a single sob, took her daughter’s head into her hands and wiped her tears in Blanche’s tight little ponytail. She left SFA without a word and without looking back.