Malcolm Sharps is an occasional contributor to this site who lives in Hungary and offers a European perspective on many topics. His previous articles here include TV Giant Clam, The Leaving of Liverpool, and Swept on by the River (on Thomas Wolfe).

Cultural Appropriation
on the Carpet:
A Cautionary Tale

Here is a story I came across recently on You Tube. A man produced a publicity photo for internal circulation in an American college. By chance, this photo of another man also happened to have clearly visible on it a Persian carpet hanging on the wall in the background. A third person from the college saw the photo on the notice board and made an objection to the college authorities. The complaint? That the display of a Persian carpet on a photo in this particular context constituted ‘cultural appropriation’, so the picture was removed. It turned out one of the men was an actual Iranian, and he told the college guardians that he found it perfectly acceptable to use a picture of a carpet from his own country; however, he was overruled and the ban on the picture was upheld.

I already knew a fair amount about the culture which produces Persian rugs but I wanted to look a good deal more at it in order to provide the greatest possible objectivity with which to judge the complaint. I certainly learnt fresh things from my investigations and, no doubt, many of these things will be new to you. For a period of around two thousand years carpet production has been going on throughout the area of modern Iran, Turkey, Azerbaijan and Afghanistan. Often the makers of carpets were not the poorest peasants, their products could fetch high prices in the markets, they were highly skilled craftsmen who had command not only of the skill of weaving but also the art of dyeing and design; and frequently craftsmen were literate men.

Over the centuries carpets reached a high-point in design and quality whose reputation spread far beyond the areas of production, and sales of Persian carpets spread correspondingly. Persian carpets and those of its neighbours are not of a single kind, they belong to a richly differentiated and competitive culture; competitive with a view to raising the standards and variety of the product in order to attract new buyers and beat a vigorous competition. Usually the carpets are named after the towns which produce them, and each has its own distinctive patterns. Some of these towns are no longer producing, but went through an earlier, more active golden age and their products are today collectors’ items; some currently produce more carpets than they ever did in the past and alongside traditional hand-knotting methods modern knotting machines are employed. There are dozens of famous districts and their names read like something from the Rubaiyat of Omar Kayyam: Isfahan, Azari, Baluch, Quashquai, Hamadan, Mashad; Kayyam is the perfect example of the literate craftsmen the culture produced, a Persian poet who also worked as a tent maker. 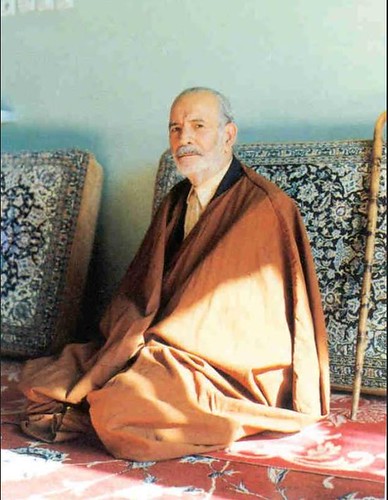 Let’s look at just two of Iran’s carpet towns that are currently very active: Nain and Tabriz. Nain in central Iran is a medium-sized producing town: it is relatively new to the carpet world compared to ancient weaving centres such as Kashan, Isfahan and Yazd. Although it started out producing Isfahan carpets, in the mid 1930s Nain began developing its own style. Very fine and precise designs were created due to the high quality of the workshops in the area. Fathollah Habibian (1903-1995) ran one of the most famous Na’in workshops and is widely regarded as ‘the father of Nain rugs’. Producing fine carpets with his brother Mohammed since his school days, Fathollah Habibian is responsible for the design and weaving of some of the world’s finest Nains.

Tabriz, on the other hand, has known carpet production for much of its history and produces on a far greater scale than Nain, it is the centre of the Persian carpet industry. Wikipedia says this of it: it was named World Carpet Weaving City by the World Crafts Council in October 2015 …With a population of over 1.7 million (2016), Tabriz is the largest economic hub and metropolitan area in Northwest Iran.

So then, carpet making in Tabriz is recognized as a leading craft industry of world significance in one of Iran’s most significant economic centres. According to estimates by the Iranian Industry Ministry, Iran produces around 400 tons of hand-woven carpets annually, the sweeping majority of which are exported to world countries. As one of the top exports in an economy that is 18th in world rankings, the rug business employs a startling 2.5 million people.

Let me make it clear what ‘employs 2.5 million people’ does and doesn’t mean. It doesn’t mean that 2.5 million people are carpet weavers; it does mean carpets are produced on a large scale to sell on a large scale, moreover, they produce to sell internationally, and their industry covers a wide range of occupations and skills. At the top of the skill range, there are the hand knotters, then the knotting machine operators, but there are also production managers, order clerks, promotion staff, bill board designers, plant builders, machine maintenance workers, truck drivers, cleaners, site security people, and many others. And the workers employed by the carpet industry do so to live, to raise families and feed children, to send them to school, to support aged parents, to live, if possible, a life elevated above the concerns of mere existence. I hope my readers are familiar with this situation, they should be; it applies also to the car industry in Detroit and to aircraft assembly in Seattle. The only difference is that the product they deal with here is often a work of art and seems too good for common use; but instead of honouring that fact, in a totally misplaced show of sympathy with Iranian culture, anti-cultural appropriationists try to inhibit and isolate Persian rugs by making people feel guilty about buying them – or even being photographed with one – in fact, whenever possible, they forbid it. The case of this school is not an isolated one. I have come across others. This is utter, utter madness. It’s more than that; it’s willfully wicked. I have to ask the question: what is this all about?

You want to protect a culture and the best interests of that culture? Fine. So should we all. Ask yourself a few questions first. Do you know anything about that culture? Does it need your protection? How is that culture harmed by what you see happening to it? And an equally important question: how might it be harmed by restricting and stigmatizing adoption of its products by labeling that ‘cultural appropriation’? If you ask and answer these questions, I don’t see how Iran is even a candidate.

But don’t let the significance of these questions slip by us. Supposing someone from another country labeled ownership of a product of the United States ‘cultural appropriation’ and wanted to protect you? Wouldn’t you think they were being condescending towards your country, the greatest nation the world has ever known, as I heard so many times from both Republicans and Democrats during the election; it was virtually the only element that they agreed on? What would you say? Hey, buddy, do you think we come from some underdeveloped Bantustan, this is the United States? And what if they got it totally wrong and picked a product that you were actually busting your butt to sell? But that is how the authorities of the said college treated Iran, they thought of the carpets that maintain 2.5 million Iranian people as some sort of sacred cultural fetish, not part of a living industry with which Iran makes its mark upon the world and is thereby both a source of national pride and income.

Put yourself in the position of a carpet worker in Tabriz or Nain whose source of income is put in jeopardy by Americans who label the export sales and display of their product ‘cultural appropriation’, if they succeed in their aims, there’s a large reduction in your sales or an end to production, your trade is wrecked, your livelihood gone. Families sink into poverty. There’s nothing to pay the rent, there’s no food to put on the table. It’s a situation we should recognize even more painfully post-Covid. And let’s not allow another fact to go unobserved here; the person in the school who put in the complaint showed no knowledge of the carpet industry of Iran, no knowledge of the culture of Iran; they treated that culture not like a robust modern state but that had to make its way in the world but like some sort of stone age museum culture. Let me tell you, Americans, the arrogance of such people is beyond this European’s understanding.

The mantra of anti-cultural appropriation is ‘respect and understanding’, but where you have no knowledge, how can you have understanding? And where you make judgments before you make the effort to obtain that knowledge, what sign is there of respect? It is clear that a line of ignorance about everything to do with Iran didn’t end with the person complaining, it continued into the board of the college, which one presumes consisted of more than one person, or at least advice was sought from others. And when a real Iranian defended his right to use an image from his own culture, there must have been further consultation on the college’s policy. In other words, a number of people must have colluded in their shared ignorance. But I know it’s always the same answer, others have encountered it before: this single person doesn’t represent the whole culture. The knowledge of one person is never any match for the lack of knowledge of a committee. So protestations are not accepted.

The whole situation highlights the ignorance and confused thinking of many modern American illiberal liberals. You judge another culture with the paternal arrogance of the colonialist that you purport to despise and you bully others in your own country while speaking against the interests of that other culture.

But I still have to persist and ask the question: what is really going on here? Why is displaying a product of Iran picked out as cultural appropriation, when it so obviously is not a candidate? Is it a ploy to actually damage an Iranian industry, which all data shows is of prime importance to the Iranian economy, to add financial injury to what has already been done militarily? Is it simply a covert attempt to damage the economy of an enemy state? You know, I think if the CIA knew about this, they’d be rather pleased. Maybe more than pleased; would it be too far-fetched to imagine the dirty tricks department of the CIA actually has a hand in all this? No, let me quickly say I don’t believe that, it was just something that flashed across my mind; the last thing we need nowadays is yet another untestable conspiracy theory. What I do believe is that when liberals do the CIA’s wrecking work for them, something must be terribly wrong.

All of the above concerns were superseded in August 2018 by Trump’s import embargo on Iranian goods which included Persian rugs. The work of the anti-Cultural Appropriationists has been achieved for them by an unlikely ally. What now for the Iranian carpet industry and the 2.5 million people who rely on it to live? It’s not good news for either. As an expert in the field told The Washington Post, “A beautiful export like Persian rugs from Iran may not be available for a time. I have more concern for the people who make them, as their livelihood depends on it. The little guy always suffers.”

One Response to Cultural Appropriation on the Carpet