From his home hub in downtown Lowell, writer, scholar, and teacher George Chigas covers a lot of territory on foot. Like Henry Thoreau who “traveled a good deal in Concord,” George will send us occasional reports on his movements and what he sees, hears, and feels. 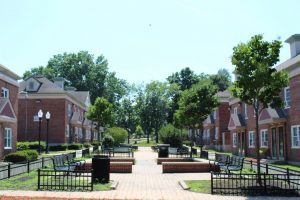 Walking home from Market Basket tonight with my chocolate soy milk and dried dates, a warm night for mid-September, mid-seventies . . . passing the “Historic North Common Housing” on Broadway I looked left and saw a TV set up on a table outside the backdoor of one of the apartments and, beyond, the gold dome of Holy Trinity shining in milky moonlight. Drawn in I turned down the path between the row of brick apartments and when I approached the backyard (small, fenced-in, about fifteen feet square) with the TV playing, a tiny dog ran up yelping. “She don’t bite,” the woman watching the TV (college football) said. A man in a t-shirt was sitting on the back step smoking a cigarette not interested in the game it looked like. “Who’s winning?” I asked. “UAB,” she said. I’m not a football fan, so I had no idea. “Enjoy the game!” I said, walking on. The man in the t-shirt looked up and said, “Have a good night.” “You too!” I said, happy I had turned. So few chances to talk to people these days. I noticed the small tree in their yard was decorated with homemade Halloween ghosts (four or five of them, at first I wasn’t sure what they were, first time seeing anything Halloween this year, except [almost forgot] the plastic gourd and fake autumn leaves in the Subway plate-glass window across from St. Anne’s) hanging from the branches, strips of black cloth and something (a tennis ball?) to make small heads. Leaving the project, I looked up and saw the quarter moon (waxing, a few nights ago it was a hairline crack) in a cloudy haze, Like a Covid mask! I thought to myself smiling . . .