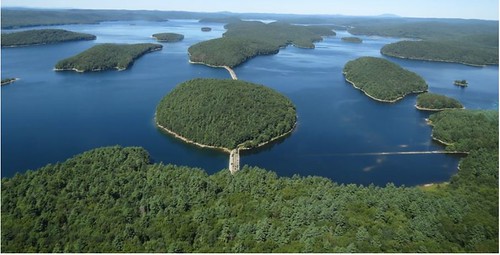 The infrastructure that supports urban living has long been of interest to me. We turn a faucet and clean, safe water flows out, as regularly as the sun rises each morning. Making that happen was a great achievement of government, one of many that we often take for granted. But great achievements often come at a high price, not just in dollars. Such was the case with the Quabbin Reservoir, which was constructed in the 1930s to provide drinking water to Boston. Last week in the Ed Markey-Joe Kennedy debate, the Quabbin came up tangentially which prompted me to ask my Hampshire County Register of Deeds colleague, Mary Olberding, in whose district the Quabbin lies, some questions about its creation. Here is her response.

The Lost Towns of the Quabbin

If you ever hear of Western Massachusetts complaints about how priority is given in this state to Boston, the Quabbin Reservoir tops any list of reasons why. The history of the Reservoir is taught in schools around here. School children take field trips there. There are reunions of the families that were relocated from the towns. There is a Memorial Day service with special commemoration for the 7,500 souls whose remains were moved to the Quabbin Park Cemetery. There are maps distinguished before or after by an inland body of water so large that it can been seen from space. And, there are many, many stories.

In the political discourse between Senator Markey and Representative Kennedy in the race for the Senate, there recently were questions raised of towns that Markey neglected which included Greenwich, Prescott, Enfield and Dana, also known as the lost towns of the Quabbin. Though the Markey campaign laughed off the jab that the Kennedy campaign had inadvertently included the unincorporated towns, it does not disqualify them from significance in a debate to be the next Senator from Massachusetts.

Today, land that was once these towns makes up the basin of the Quabbin Reservoir, and as such, requires attention for its national security implications—vehicle traffic and other access has been restricted since 9/11 and for its conservation protection—where, starting in 1982, Bald Eagles were introduced to the region in a successful effort to restore their population in the wild. Today there are nearly 70 known nesting pairs of eagles in the region.

What makes the Quabbin significant, especially to residents of Western Massachusetts, is the long history of its creation resulting in the complete destruction of the four towns and forever changed the landscape of the area. 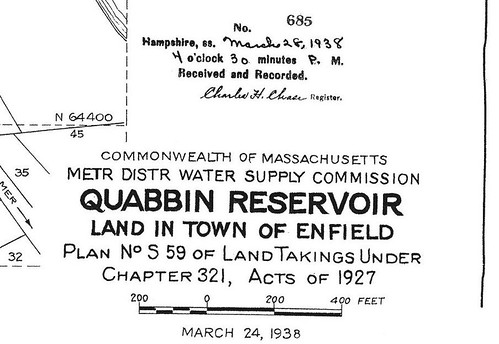 Greenwich, Enfield and Prescott were part of Hampshire County; Dana was in Worcester County. Records of the takings of those towns can be found in a search of records at the Hampshire Registry of Deeds website including land surveys (Plan Book 21) at MassLandRecords.com. Looking at the images, you can see each parcel of land and each owner’s name. You see the names of the 13 cemeteries where the bodies were exhumed to be moved to their new collective resting place. You can see the waterways of the Swift River where engineers saw the possibility for providing for ‘Boston’s water.’ 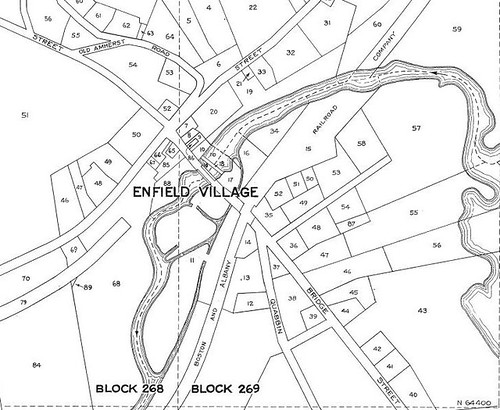 The need to create the Reservoir came in the late nineteenth century to help with the drinking water supply for the Boston area whose population itself was overflowing. The Hampshire Registry has a topographical map from 1890 where an overlay of the Quabbin is placed over the existing towns. Plans to create multiple reservoirs to serve as a water source for Boston were developed at that time but what became the Quabbin Reservoir didn’t become necessary until after the Great Depression settled in. Construction on the reservoir began in 1936 with help from the Works Progress Administration (WPA), a New Deal era jobs program that put people to work at a time when national unemployment reached 25%.

The plan was to divert water from the three branches of the Swift River, a tributary of the Connecticut River, through newly constructed aqueducts that extended across the state to provide a natural source of water to Boston. At the time, it was the world’s largest man-made reservoir devoted to water supply.

To accomplish this goal, 2500 people were displaced from their homes, the towns were unincorporated and significant amounts of land were taken from New Salem, Pelham and five other surrounding towns. According to the book, ‘The Lost Towns of the Quabbin Valley,” few structures were moved intact to nearby towns but most buildings were completely razed, wrecked or burned. Some compensation was given but most property was taken by eminent domain. “On January, 15, 1938, registered letters were sent to the remaining residents: ‘you are notified that the Metropolitan Water Supply Commission requires on April 1, 1938 the land and buildings now occupied by you.’”

The takings of land were recorded in the Registry of Deeds in 1937 and 1938 under authorization of Chapter 321 of the Acts of the Massachusetts General Court of 1927.

Today, the town of Dana is the only one of the towns that is not completely submerged. You can park at the nearby gate in Hardwick and walk a good mile or so to its center. Its layout looks like many small New England towns complete with its tree-lined Common. The rock foundations of buildings lay vacant in and around the center, some with steps leading nowhere. It is hauntingly still.

As Register of Deeds for Hampshire County and resident of Belchertown, I have a keen interest in the Quabbin. It is only a few miles from my house and is breathtakingly beautiful at any time of year. I have seen the eagles flying above and am proud to say that this natural resource is a part of my district. 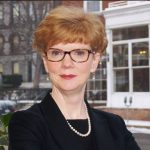 Mary Olberding is the Register of Deeds of Hampshire County and a resident of Belchertown, Massachusetts.

4 Responses to The Lost Towns of the Quabbin