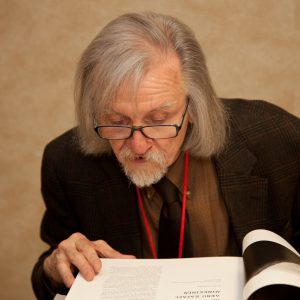 Anyone who has been watching the UMass Lowell Art Department in the past few decades knows the name Arno Rafael Minkkinen, a world-class photographer who has been anchored there as a teacher and artist since 1987. He lives in the region, but works the world as an acclaimed photographer who uses his body for self-portraits of the most innovative kind. That’s his signature work. His new book Minkkinen, which he co-authored with Keith F. Davis and Vicky Goldberg, includes selections from his work across five decades. The book received the 2019-20 German Photo Book Gold Award, the top prize. 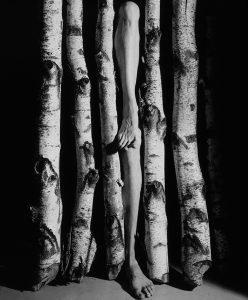 Professor Minkkinen has a substantial Wikipedia entry, which is one indicator of his stature by a common measure.

Finland, where he was born, Switzerland, France, Japan, China, Greece, across the U.S.—in museum and galleries far and wide his work has been shown and reviewed with praise.

Reviewer Thais Gouveia of New City Brazil wrote this about an exhibition in Sao Paulo, Brazil, in 2016:

“Minkkinen goes beyond the investigation of the sculptural aspect of the body to test “the limits of what the human body is capable of or willing to risk” as he said. Thus, it seems clear that Minkkinen’s intention is to submit the flesh to the confrontation with the landscape that both can make the body appear or disappear.”

Here’s more on the book from the publisher, Kehrer Verlag:

“Working with the body in natural and urban landscapes—without assistants and without manipulation—Minkkinen’s self-portraiture stands as one of genre’s longest,  nonstop continuities in the history of photography.

This monograph is spanning five decades of work by the acclaimed Finnish-American photographer Arno Rafael Minkkinen (b. 1945).  The 330-page hardcover book depicts over 270 images since 1969 to the present with important works from all 50 years. More than half of the images are largely unpublished, including over 100 recent works since 2005, with numerous discoveries from the 1980s and 1990s, plus significant groundbreaking images from the early 1970s, years before the self-portrait entered the mainstream of contemporary photo-graphy.

Whether he is working along lakeshores or beaches, in cities or forests, from majestic mountaintops or buried in the snow, Minkkinen aims to create a balance between the naked human form and the natural and urban worlds wherein we exist, reminding us that we are foremost beings without clothes. the results can be surreal, spiritual, and transformative, often tinged with a profound sense of humor. Photographed in nearly 30 countries and 20 American States, the comprehensive book also operates as a kind of artistic diary, divided into ten thematic chapters, each with a preface written by Minkkinen, as well as a closing memoir titled Voyage of the Self.”