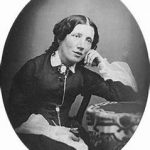 At the height of her fame and literary skill Harriet Beecher Stowe was an Andover, Mass., resident. Averaging a book a year for nearly 30 years, she wrote nine during the dozen years she lived here. Famous people flocked to see her, including leading abolitionists Frederick Douglass and William Lloyd Garrison. Former slaves Sojourner Truth and Josiah Henson came requesting “puff-pieces,” reviews to boost sales of their Slave Narratives. When her husband’s Bowdoin classmate, the pro-slavery President Franklin Pierce, came calling however, Harriet made sure she was not at home.

In a letter to her husband, still under contract at Bowdoin College, she wrote, “Andover is a lovely place –so many beautiful walks,” and told Calvin of horseback riding to Pomps Pond and climbing Prospect Hill. Local residents called the author’s residency here, “the Merriest Epoch On the Hill.”

The faculty house offered them simply would not do. It was too small for their six children, her brood of brothers, and other relatives expected to visit, and quite inadequate for entertaining. Harriet had her eye on that abandoned stone building at the edge of campus. Built in 1828 for manual training, it had once served as a workshop where students learned carpentry skills while keeping tuition down. Later, it became a gymnasium and was now used for storage.

“That’s not available,” the trustees said. “No one could possibly live there!” Harriet waved the first royalty check from her publisher before them–$10, 300. “That Stone Cabin is what I shall fix up for our family home.”

“It seems almost too good to be true that we are going to have such a house in such a beautiful place and to live here among all these agreeable people,” Stowe wrote Calvin.

Uncle Tom’s Cabin: or Life Among the Lowly was first published in installments in The National Era.  “It is as much my vocation to preach on paper as it is that of my seven brothers to preach by voice,” Harriet said.  “I believe the author’s writing desk to be higher than a pulpit!” Some chapters were written at the kitchen table on paper bags while “chowder bubbled on the wood stove and the baby slept by my feet in a basket.”  She read parts of it aloud to her children, and, after hearing one chapter, nine-year-old Freddy burst into tears, “Oh Mamma, what a wicked thing slavery is!”

Uncle Tom’s Cabin was the first novel featuring an African-American protagonist. Released as a book in March, 1852, three thousand copies were sold the first day. The blockbuster was heralded and hated. Its author was labeled “a meddling woman who knew nothing about slavery.” Many believed it would cause slave insurrections. In some southern towns, one could be arrested for buying the book, having it on your person or found lying around the house.

The book inspired or infuriated Americans in a way that political pamphlets, newspaper accounts, and slave narratives never had. Harriet received so much mail that another delivery man was hired. And much of it was hate mail. One package arrived with a human ear inside, a gift from a plantation owner who had cut it off his slave.

Because pro-slavery advocates accused Stowe of writing “a tissue of falsehoods,” she was determined to document her sources following publication. “I am now very much driven to unlock “The Key to Uncle Tom’s Cabin,” she explained. “It is made up of facts which my eyes have looked upon and documents I have handle . . . .”

The Stone Cabin in Andover was “transformed by Mrs. Stowe at an expense of thousands of dollars, into a beautiful country residence . . . with a very pretty piazza of Italian architecture and a fence of unique appearance surrounding the front yard.'” (Andover Advertiser, March 5, 1853)

Harriet had “the home touch.  ‘Here, for many years were received and entertained, many of the most distinguished people of this and other lands, and here were planned innumerable philanthropic undertakings in which Mrs. Stowe and her scholarly husband were the prime movers. (Charles E. Stowe, Life of HBS, p. 185 ff.)

Dominated by Andover Theological Seminary, known widely as ‘The Bulwark of Calvinism,” the place was much too prim and proper for Harriet.

“I see no reason why religion and long, sour faces must go together,” she complained.  “I do not intend to have my children raised in this crushing atmosphere!”  Harriet intended to make her home “a center of social life; an open, hospitable place of humor.”  Local tongues wagged when she put up the town’s first Christmas tree and invited the stodgy seminary fathers over to receive gifts that turned out to be jokes, rather than the mementoes they’d expected from the Stowe’s European trip. Harriet took three European tours from Andover, partly to deliver lectures sponsored by foreign anti-slavery groups. She met Prince Albert and Queen Victoria, who confessed “weeping over her book.”

Concerts, charades, and dances were frequent happenings at the Stone Cabin, and, once, Harriet was sternly chastised for keeping her daughters’ Abbot Academy classmates “out past half-past eleven!” The Stowes purchased land in West Andover, where they enjoyed carriage and sleigh rides. Harriet sponsored the Lawrence Glee Club. After her eldest son was drowned at Dartmouth, she attended spiritualist gatherings in Lawrence, in hopes of communicating with Henry. After all, hadn’t she and Calvin heard his guitar being strummed in the Stone Cabin? From Andover, Harriet took the train to Boston to meet fellow authors at the Old Corner Book Shop or attend Founders Dinners with other Atlantic editors. And though proper women did not attend the theater, Harriet was eager to see the characters from her book brought to life upon the Boston stage. She was among the cheering crowd in Boston’s Tremont Temple on January 1, 1863, when the Emancipation Proclamation was announced.

Charles Stowe, the youngest Stowe, was a regular Dennis, The Menace. The entire family, including Nanny and Cook, was continually frustrated by his antics, which Harriet reiterated in “Our Charley, And What to Do With Him,” the column she wrote for the Andover Advertiser that published as a book in 1858.

“He makes a locomotive of the work table and a steam whistle of himself . . . Or greater horror, company is expected and he must put on a clean suit just as he had made arrangements for a ship-launching down by the swamp.”  Charley’s habitual lying became such a serious concern that Harriet sought a phrenologist to analyze his character and the cause of his problem by reading protuberances on his skull.

When “War came like a whirlwind, amazing even those who foretold a bitter harvest of violence . . . ,” Professor Stowe and his wife sent local forces off with speeches and a hymn Harriet wrote for the occasion. Impatient for the  emancipation of slaves, Harriet went to the White House.

Harriet’s trip to Washington also presented the opportunity to see her son Frederick, who had dropped out of Harvard to enlist and was now stationed near the Capitol.

Later, the Stowes would learn of Fred’s terrible wound during the Battle of Gettysburg from an item in the Andover Advertiser.   Calvin immediately caught the train to New York where Fred was hospitalized.  Shrapnel had lodged in his ear from which he never fully recovered nor escaped pain. The PTSD suffered by Frederick Stowe caused him to seek relief in alcohol, even among the bars and streets of Boston. He horrified his sisters by staggering about Andover, embarrassing all three so they refused to speak to him. A decade later, Fred boarded a ship out of Boston and was last seen on a San Francisco wharf before disappearing forever.

Harriet Beecher Stowe died in Hartford, Connecticut, on July 1, 1896, and is buried beside Calvin and their son, Henry, in Chapel Cemetery on Phillips Academy’s campus in Andover. Harriet remained controversial even in death, for her three surviving children installed a non-Puritan Celtic cross their mother had admired in Scotland above her grave. And a group of former slaves and their descendants left  a wreath with a banner reading, “From the Children of Uncle Tom.”