Linda Hoffman is an artist and orchardist who operates Old Frog Pond Farm in Harvard, Mass. This is her second appearance on our blog. She has written a memoir about her experiences on the farm. She made the photographs accompanying this essay. Click on the photos to see the image enlarged.– PM

The Mystical World of John Chapman 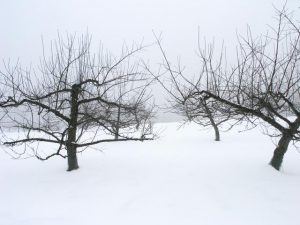 John Chapman (1774–1845) is familiar to most grade-school students in the United States as Johnny Appleseed, the man who planted apple seeds. The irony is that John Chapman might have been sorely disappointed with this epitaph. John Chapman established nurseries of apple trees in Pennsylvania, Ohio, and as far west as Indiana, but these orchards were not his true raison d’etre. Selling apple trees for his livelihood gave him the possibility of travel where and when he wanted—and the freedom to practice and spread his religion of choice.

John followed the teachings of Emanuel Swedenborg (1688–1772), a Swedish mystic, scientist, and theologian who influenced Harriet Beecher Stowe and was praised by Ralph Waldo Emerson. Swedenborg believed we live in both the world of spirit and the material world, but that our eyes are often closed to the former. He was a Christian who formed a new religious movement, the Swedenborgian denomination, to advance the idea that God revealed himself in the earth, in all sentient life. Swedenborg taught that love is the “basic unit of reality.” He was determined to show people that there is more than what they see with their eyes and hear with their ears: there is a mystical world that everyone has access to. 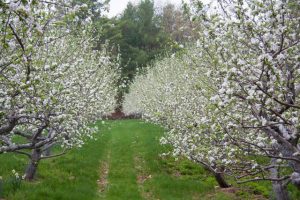 John Chapman carried the words of Swedenborg across the American frontier. Visiting homesteads, he would pull out his Bible and read passages with an ardor that calls to mind the television evangelists of today. Sometimes he would tear out a few pages and leave them, only to exchange them for new ones the next time he passed through. He was a vegetarian, wore no leather, and would never cut down a tree. He never even grafted a tree, saying that it hurt the tree. 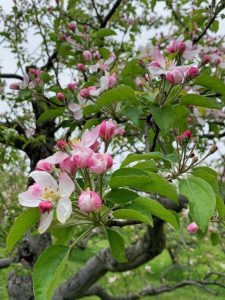 Of course, on these journeys, he always had seedling apple trees to sell. Fruit trees, a requirement for anyone wanting to establish a land claim, also provided the sugars to make hard cider—the drink of choice for the settlers at all three meals. From apple cider, settlers could then make apple cider vinegar, useful as a cleaning agent, a preservative, and medicinal drink. Even if the apples Chapman’s seedling produced were bitter and hard, “spitters” they were called, it didn’t matter, for they all mixed well in the press.

Chapman would travel into a new territory ahead of the homesteaders and establish a small nursery with seeds he picked up from a cider mill in Pennsylvania. He would choose a protected spot near a river or stream, secure it with brambles, and travel on. The following year he would return and dig up his one-year-old seedlings. Apple seedlings with the right conditions can grow five feet or more in a year.

By the 1820s, seedling orchards were condemned because the apples were destined to be converted to demon alcohol. Temperance societies called for the destruction of wild apple trees as an essential step toward sobering up the nation. Fortunately, a few decades later, John Chapman’s younger compatriot, Henry David Thoreau, born in Concord, Mass., in 1887, celebrated wilderness, wildness, and, thank goodness, wild apple trees, writing the long essay, Wild Apples, in celebration of them, though even he feared what the future held.

I see nobody planting trees to-day in such out-of-the-way places, along the lonely roads and lanes, and at the bottom of dells in the wood. Now that they have grafted trees, and pay a price for them, they collect them into a plot by their houses, and fence them in . . .

Let’s support the solitary apple tree growing on the side of a road or among golden rod in an unmown field, likely planted by bird or deer, or an apple core tossed from a car window. This tree might not offer up a tasty dessert apple, but it will provide refuge for birds and insects and food for deer and mice. This apple tree will produce seeds for more apple trees, increasing the biodiversity on the planet. While bee colonies are collapsing and the insect population is half what it was a few years ago, one seed planted by a hungry horse, lone crow, or faithful gardener can grow and make a difference.  John Chapman would be smiling.