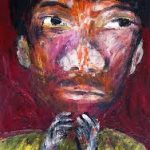 4 Responses to New Poem: Chath pierSath on the Cambodian Road