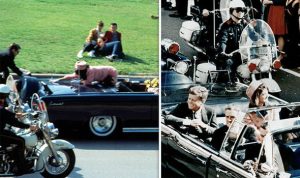 Left, Mrs. Kennedy trying to reach a Secret Service officer after the shooting of her husband, President John F. Kennedy; right, JFK and Jacqueline Kennedy before the shooting in Dallas, Texas. (Web photos courtesy of express.com)

Fourth grade. Nine years old. Friday afternoon after lunch. A nun opens the door to my classroom and tells the sister standing in front of the class, “President Kennedy has been shot.” (How does she know? Was she listening to a radio in the school office? Did a parishioner call the convent next door?) In a minute, a different nun pushes a wheeled metal cart with a TV on the highest rack into our classroom and turns it on. The time is about 1:45 p.m. in Dracut. Cardboard turkeys and pilgrims in tall black hats decorate the windows facing the line of maple trees on Goodhue Avenue. The kids sit quietly. We look at each other and then at the TV. A framed color photograph of the President hangs in the front left corner of the class near the American flag and Canadian flag of Quebec with a fleur-de-lis in the center. A color picture of Pope Paul VI balances the President’s photo. By the time yellow buses pull up alongside the school we know the President is dead. November 22, 1963.

At home, the TV stayed on during waking hours from Friday evening through Monday afternoon. Networks covered every step of the ritual after the shooting and death. The word assassination was a word from the history books, from President Abraham Lincoln’s murder in 1865. It wasn’t a word we knew or had any reason to use, but now the word was everywhere. In Massachusetts, in Catholic families, the killing was a death in the family. We referred to him as JFK, like FDR, President Franklin D. Roosevelt—the acronym could have come from Boston tabloid headline writers who would have written “Hub Man Tabbed Pontiff” if Boston’s Cardinal, Archbishop Richard Cushing, had been selected to be pope. In his large family, then and later, the second oldest Kennedy brother was “The President.” Massachusetts households, especially Irish-Americans, displayed his portrait on living room walls as if he was a living saint. Some of the older Irish called him “Jack.”

We followed each stage. From Texas, the arrival in darkness of the casket in Washington, D.C., with a new President, Lyndon B. Johnson, already sworn-in and in charge. Mrs. Kennedy, “Jackie,” in the bloody pink jacket and skirt smeared with her husband’s brain matter, stepped down from the plane transport. The lying-in-state on Saturday. Thousands passed by. Elegant horses pulled a caisson bearing the flag-draped coffin to the Capitol, shining white like the Washington Monument, Lincoln Memorial, and house where the president lived.

On Sunday a little after noon, on live TV, the grotesque scene in the basement of Dallas police headquarters. Skeevy mobbed-up nightclub owner and cop-shop rink rat Jack Ruby pushes through the crowd of onlookers and jabs his pistol toward Lee Harvey Oswald’s abdomen, firing the gun. Police gripping Oswald recoil in shock. Officers swarm Ruby. Confusion doubles, triples. Ruby has cut out Oswald’s tongue. The public will not hear his story beyond his shout of “I’m a patsy” when the authorities briefly displayed him to the media like a captured dog. “We have the assassin.” Wrestled into custody, Ruby is a history-crasher.

What is going on with the three-name motif? John Fitzgerald Kennedy. Lee Harvey Oswald. Lyndon Baines Johnson. John Wilkes Booth. Martin Luther King, Jr. James Earl Ray. Bobby Kennedy broke the pattern, but he could be Robert Francis Kennedy sometimes. And Sirhan Sirhan had his own strange slot, the same name twice. It’s as if we needed three names to contain the weight of the presence of these figures. The rhythm tells us the information is substantial.

In Washington, funeral preparations came together with military precision. World leaders flew in to pay respects. President Charles de Gaulle wore his French army dress uniform holding in his right hand the traditional cap that looks like an upside-down saucepan. Queen Frederika of Greece in mourning-black coat. In his dress uniform, chest lined with medals, bearded Emperor Haile Selassie of Ethiopia. Ranks and ranks of other dignitaries. Behind the caisson, the rider-less horse with high black boots backwards in the stirrups, led by a young Army officer. After the funeral Mass, John junior in light-blue coat with matching short pants saluted like the soldiers had when his dad’s body was taken on its way to Arlington Cemetery. His sister Caroline, also in blue, stood on her mother’s right. Hearts broke.

John F. Kennedy was forty-six years old when he was shot dead. Two years older than my father. The World War II generation. I had borrowed P.T. 109 by Richard Tregaskis from the Dracut public library, the story of a young Navy lieutenant in the Pacific whose patrol boat was split by a Japanese ship. He and his crew thrashed in the gas-soaked sea. They swam to a nearby island, Kennedy stroking with the belt of a life jacket in his teeth as he pulled an injured crew-mate behind him. Debunkers questioned the melodramatic storyline in the book, charging that Kennedy had recklessly put his boat in harm’s way. As with almost anything Kennedy, before and after his death, the truth was a polyhedron.

The day of JFK’s inauguration in January 1961, a snowstorm swept through New England. My mother kept me home from school, and we watched on TV. Almost seven years old, I heard the call to action in real time. Reporters picked up the quotable lines that distilled the attitude of the new administration. The former Supreme Commander of Allied Forces in Europe, now former President Eisenhower, sat with top hat on the platform. Robert Frost in a long winter coat prepared to say a poem. Hatless in the freezing temperature, the new president poked the air and declared, “Ask not, what your country can do for you. Ask what you can do for your country.” That was it. The challenge. The assignment. The homework. The call to action that sank into me deeply over the next five years. I believed it. I wanted to respond.

I began to think that I might be able to become president. I even picked the year: 2000, when I would be forty-six. That was the plan. True story. At the time it was not highly unusual for a kid to say he wanted to be president. The adage was that anyone could grow up to be president.

An excerpt from a memory book, BLUE SUBURBAN SKY, by Paul Marion (c) 2019