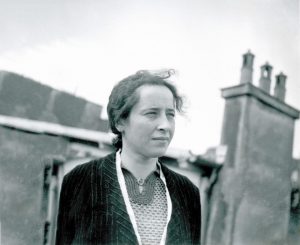 Certain national observers have been saying for some time that America is in a state of emergency, and many of us have felt like that since late 2016. This is no normal time. The policy disruption at the federal level is so continuously corrupt and cruel, due to the combined power of the Executive and the US Senate’s majority-based rules, that any one voter can feel inadequate in attempting to resist. But the respected analyst of political theory and practice Hannah Arendt (1906-1975) believed that resistance begins with one person refusing to comply with what he or she sees as evil social activity, with harmful public policy, with any inhumane action being done privately or in the name of the people as a whole. Of course this view raises questions about staying within the bounds of laws when protesting or choosing civil disobedience with its consequences.

Arendt is a controversial figure herself, and scholars argue about her strongly held views on human nature, fascism, the refugee experience (she was one), the state of Israel, and more. Take what makes sense to you from her analysis and decide for yourself about the rest. There is plenty to read. I first encountered her in a course on international politics at Merrimack College. We read and discussed her book The Origins of Totalitarianism (1951), a classic work of political theory. This is not abstract, high falutin’ stuff. These behaviors, good and bad, begin at the grassroots in everyday decisions. They expand outward and upward either way. The small things count . . . and add up to larger trends and norms.

Brainpickings.org revisits the insights and experience of Arendt in this post today making the rounds on Facebook.