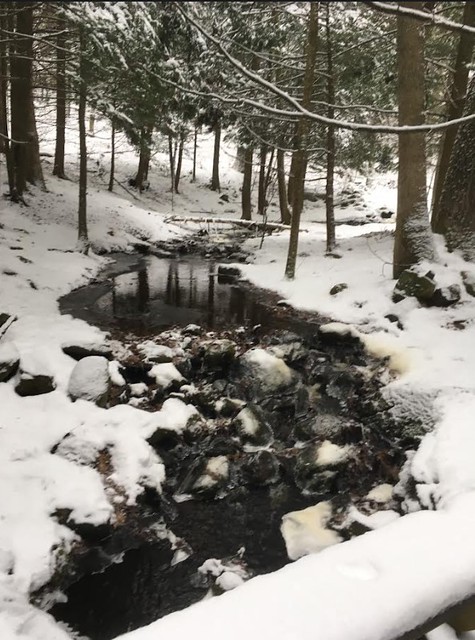 The first time I visited Great Brook Farm State Park in Carlisle was nearly twenty years ago. We had recently returned from a vacation at Acadia National Park in Maine. While we were there, we hiked almost every day. We mostly stuck to Acadia’s carriage roads and its easier trails—we didn’t have much in the way of hiking gear and our daughter was young. But it was the first time in my adult life I’d ever spent so much time in the woods. I was hooked.

The day after we got home, I bought a pair of hiking boots. I knew about Great Brook from the marketing work I did for the Greater Merrimack Valley Convention and Visitors Bureau. The park was close by, so I laced up my new boots, threw a few snacks and a bottle of water into my old college backpack, and drove there.

Following one of the free paper maps offered at the park’s visitors center, I think I might have completed a two-mile loop that afternoon. But I was already in love with the place. I went back every chance I got, often during the day when my daughter was at school. Before long, I’d hiked every single one of the park’s trails.

In the years since, I’ve spent more time at Great Brook than I can count—hundreds, maybe even thousands, of hours—in all four seasons. During that time, I’ve been lucky enough to see and hear countless wonderful things.

Eastern bluebirds gather in flocks along the edges of the park’s meadows and fields in the wintertime. I’ve seen up to thirty of them at once, their royal blue plumage striking against the dull backdrop of dormant grass and dead leaves. On the occasions I’ve been lucky enough to be at Great Brook when there’s a light coating of snow, I’ve spotted the tracks of some of the wildlife that calls the place home: white tailed deer; porcupines; red and gray foxes; wild turkeys; coyotes; muskrats; minks; beavers; bobcats, and black bears.

In the springtime, the woods erupt with life. As soon as the snow melts in March, the hoarse croaks of mating wood frogs rise up from the park’s swamps and vernal pools. Wild sarsaparilla, Solomon’s seal, and lacy green ferns cover the forest floor. Fuzzy goslings waddle behind their parents on the shores of Meadow Pond. I especially like visiting in May when the columbine and lady’s slippers are in bloom.

I’ve heard the who-cooks-for-you calls of great horned owls perched in the treetops, and spotted Baltimore orioles, cedar waxwings, piliated woodpeckers, hummingbirds, wood ducks, brown creepers, and rock wrens. Just once, I saw a comical flock of killdeer running back and forth along a dirt path similar to the way their cousins, piping plovers, run on a sandy beach. Last fall, Rob and I spotted a pair of northern harriers gliding over a meadow, the raptors’ nearly four-foot wingspans dwarfing those of every other bird.

Rob and I once came across two muskrat kits, each of them just a couple of inches long, playing in the grass beside River Meadow Brook. We’ve seen northern water snakes as thick and as long as my arm sunning themselves on rocks. One late spring day, I discovered a tree frog no larger than my thumbnail sitting on my shoulder.

The park is full of history. For thousands of years, the land was home to Native Americans, whose ancient stonework can still be seen in the woods. In the 17th century, the land was farmed by English colonists. The cellar holes of their former homes and storage buildings are ubiquitous if you know where to look. Behind a rotting cabin on the Woodchuck Trail, the stone ruins of an early 18th century saw and grist mill sit at the end of a hand-dug mill pond. Many of the park’s trails were once Colonial-era roads.

Almost everything I know about glaciers and our local geology I learned from hiking at Great Brook. The park is laced with eskers, glacial erratics, kettle holes, and sandy washouts loaded with glacial till. The huge sedimentary boulders along the Stone Row Trail date back millions of years.

Great Brook Farm State Park was created in the late 1960s, when the then-owner of the land, a farmer, sold it to the state. I’ll always be grateful that he did. It’s a special, magical place—a respite from the bustle and craziness of the everyday world—where, if you listen carefully, the wild heartbeat of the land can still be heard.

Emilie-Noelle Provost is the author of The River Is Everywhere, coming March 14, 2023, and available for pre-order on Amazon and Barnes and Noble. She is also the author of  The Blue Bottle, a middle-grade adventure with sea monsters. Learn more about Emilie and her work at emilienoelleprovost.com.