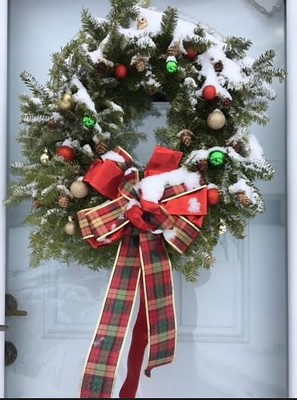 Christmas with the Kanes

The exchanging of cards at the holidays remains a quaint, if vanishing, tradition. For a time, it gave ground to the “holiday letter”—pages of cheery mimeographed minutiae. But even those have waned, the impetus to show lives in perfect balance largely siphoned off by Facebook and made a year-round event. Still, cards do arrive. Many of them postcards of the Shutterfly variety.

Every year we get a card from the Kanes in Pennsylvania. I imagine it’s a lovely card. The beautiful handwriting on the envelope, and the embossed return address stamp—a circle, with “The Kanes” printed inside—and the aptly-chosen festive postage stamp suggest it. I picture a nostalgic Currier & Ives rural snow scene, or something gilt-edged and classic from Gaspari. I don’t know for sure, of course, because we never open the envelope.

I look at it, tell my wife it has arrived, then, with a smile, I take it next door where it belongs. You see, we’re at 34 Castle Brook Rd., the number written on the envelope of the card from the Kanes. The addressee is the Desmonds. The Desmonds live at 32.

The first time this simple mix-up occurred, Cori Desmond, our neighbor, grinned when I brought the card over, and thanked me and said she’d let the Kanes know they had the incorrect house number.

That was seven winters ago. Each year since, like clockwork, a week before Christmas, a card from the Kanes arrives. The street address is still number 34. And each year I take it next door and give it to the Desmonds and we have a laugh and they assure me they’ve informed the Kanes, and promise to remind them.

What I suspect happens is that they mention this to their friends, who live near Altoona. It’s probably after the holidays by that point, and good intentions being what they are, etc. One of the Kanes may even jot down the Desmonds’ correct house number on Castle Brook Rd., but in the maze of confusion that the holidays are the change doesn’t make it to the official holiday card list, which by then has been put away for the year.

If it were a computer list, a simple one-time keystroke would do the trick. But I get it, I prefer handwritten too. Old dogs, new tricks. So, it’s no one’s fault. Certainly not ours, nor the Kanes’—who don’t know we exist—nor the Desmonds’. And until such time as the USPS adds mind-reading to augment its already-impressive array of high-tech wizardry, I hold all parties innocent of blame.

And the fact is, I truly don’t mind the mix-up. The Desmonds are only a single house away. And getting the card from Pennsylvania . . . don’t laugh, it makes me think of that line in the song about a guy heading for Pennsylvania and some homemade pumpkin pie. Perry Como, is it? Anyway, bringing it to where it belongs provides one more opportunity to say hello to good next-door neighbors, whom we see all too seldom during the busy year.

Update: The Kanes’ card came today. The address is unchanged, written in the same very neat hand as always: “The Desmond Family, 34 Castle Brook Rd., Weybridge, MA 01886.” I’ll bring it over to number 32 tonight and we’ll have a gentle laugh and wish each other happy holidays.

I’ve also made a New Year’s resolution that I’ll run by my wife first before I act on it. I’m going to ask my neighbors, if we ever move, to please tell their Pennsylvania friends that they, the Desmonds, have moved, and give the Kanes our new address. I’ll make sure the card gets back to the Desmonds eventually, of course, but I’d like to have it arrive in our mailbox first. Christmas without the Kanes just wouldn’t be the same.

7 Responses to Christmas with the Kanes