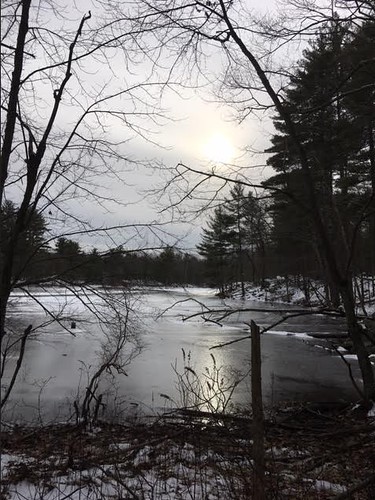 You hear a lot about seasonal affective disorder this time of year. Many people find the lack of sunlight depressing, but I don’t mind December’s dark days.

I love how quiet our neighborhood is after the sun sets. No one is outside mowing their lawn. There are no leaf blowers drowning out the music on the radio; no dogs barking at passing strangers. The kids are all inside, their bicycles and baseball gloves tucked away until spring.

I like to spend time in the woods late on December afternoons. The bare branches of sugar maples and white oaks filter the sun’s last, long shafts of light and for a few enchanted minutes the forest floor glows. Deer gather along the treeline looking to browse what’s left of last summer’s swaying grass. When the sun finally sets, the whole sky catches on fire.

On the winter solstice a few years ago, Rob and I drove to Harold Parker State Forest in Andover. The sky was overcast. The layer of crisp snow covering the trail cracked beneath our boots. We spotted the tracks of pacing coyotes by the shore of Salem Pond, and could plainly see the places where beavers had hauled themselves out of the water on the hunt for fresh twigs. We followed the trail of a rafter of turkeys for a while, the waggish birds’ tracks eventually drifting off into the brush. After the hazy white disc of the sun disappeared over the icy pond, leaving the place to the owls and fishers and other creatures of the night, we hiked back to the car feeling like we’d emerged from a dream.

Last year on the shortest day, I met my friend Liz at the Crane Estate in Ipswich. We hiked over the grassy dunes and watched as streaks of pink and lavender formed in the sky above Plum Island. Loons from the north country floated on the sea—their winter home. The air was cold and dry, the kind the makes you feel more alive just for breathing.

A lot of animals hibernate this time of year: bears, and chipmunks, and the chirping wood frogs that fill up vernal pools in the spring. Dark days are good for resting.

On December mornings, Rob and I lie in bed long past the time we normally get up, flannel sheets covering our noses. We talk quietly, waiting for the dawn, our three cats curled up on the rug by the heater. Over the years we’ve been together, these moments have come to define peace.

Long nights lend themselves to reflection. I sit by the radiator in my office and think about my friends who died this year, how much I miss them and what I would say to them if I could. In the gray silence, I reflect on the things we’ve done since last December, the places we went, people we met. I think about my young adult daughter and all the adventures she’s yet to have, and I pray for her to be happy and safe, that she’ll be able to learn from her mistakes and stay strong when life gets hard. I make plans for the future, and wonder what the following year will bring, where we might go when the sun returns.

Often, in my mind, I confuse the winter solstice with New Year’s Day. It always feels like a new beginning to me, much more so than the first of January ever has. Several civilizations celebrated the New Year on the solstice. The Old Norse had Yule, a three-day festival marking the annual return of the light. The Zuni Native American tribe has observed Shalako for centuries, a series of dances that celebrate the New Year by re-enacting the creation of the world. In Wales, the winter solstice celebration of Alban Arthan has persisted since pre-history. It marks the birth of the New Sun, which brings with it a new year and renewed life.

I know there are many people who can’t wait for spring’s longer, warmer days, but I’m happy to savor the serenity this time of year brings, to soak up its stillness so that I can recall it amid the bustle that will return soon enough.

Emilie-Noelle Provost is the author of The River Is Everywhere, coming in March 2023, and The Blue Bottle, a middle-grade adventure with sea monsters. Her website is  emilienoelleprovost.com.