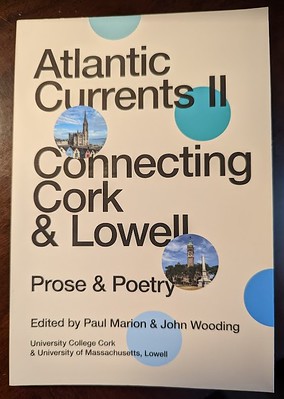 My affection for Ireland is grounded in history, culture, and genetics, however, I’ve not yet visited the country. When I finally do, I’ll be sure to visit a pub. My impression from afar is of the pub as a convivial place filled with friendly people who are great storytellers.

In some ways, Atlantic Currents II: Connecting Cork & Lowell, a new book from Loom Press, edited by Paul Marion and John Wooding, serves as a stand in for a pub because it’s a convivial book filled with great stories. This new volume is a successor to Atlantic Currents which was published in 2020 to great acclaim. Both books emerged from a partnership between people from Lowell, Massachusetts, and Cork, Ireland, built around UNESCO’s Learning Cities network. The first volume collected stories and poems from people from or affiliated with both cities while this new volume highlights the writing and poetry of from students and alumni of University College Cork and of University of Massachusetts, Lowell.

Among my favorites stories from A.C. II is one by Lowell’s Christine O’Connor about the death of an elderly relative in Ireland (“Annie’s Bike, Brian Friel, and Translating Loss”). The story captures the sadness that accompanied the death of a beloved elder but also the resilience and hopefulness that accompanied O’Connor’s impromptu restoration of the decedent’s long unused bicycle. That undertaking caused good memories to surge. “Sometimes objects can speak to us in ways that words can’t because they tell us things that are to be felt rather than said.”

As a veteran of cardiac surgery, I was especially interested in Alan Egan’s tale of open-heart surgery in 1964 when he was shocked to discover in a pre-employment physical at age 20 that he had a congenital heart defect that would likely kill him instantaneously if not surgically corrected (“An Extraordinary Man”). It was Egan’s good fortune to come under the care of Maurice Hickey, a masterful and compassionate heart surgeon who introduced what we know as open-heart surgery to Ireland. Egan was one of his earliest patients. The story expresses Egan’s gratitude towards his white-coated savior while at the same time capturing medical care from another era. To me, the most jarring example of that was how Egan’s hospital room filled with smoke not from any kind of a fire but from the lit cigarettes of the many visitors he had.

Poignancy gave way to uproarious laughter when reading Phil Terrana’s Never Mess with a Nun Named Leo in which he and some middle school companions thought they had outsmarted their nun/teacher but eventually learned otherwise. It’s a tale familiar to anyone who attended parochial school.

Atlantic Currents II is filled with similar stories which are uniformly engaging and excellent. It’s available for purchase online from Loom Press.