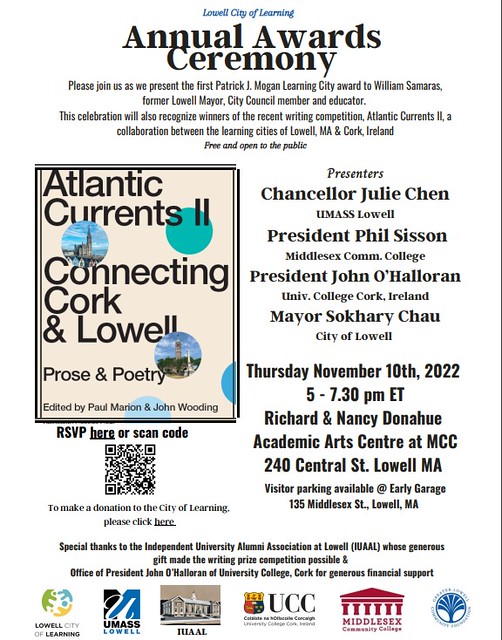 This celebration will also recognize winners of the recent writing competition, Atlantic Currents II, a collaboration between the learning cities of Lowell and Cork. In 2019 Lowell City of Learning completed a project whose objective was to create connections between two communities (the cities of Lowell, Massachusetts, US and Cork, Ireland) committed to the values and goals of the Learning Cities program of UNESCO. Writers associated with Cork and Lowell were asked to contribute fiction, non-fiction, poetry, drama, criticism, experimental and mash-up forms on any subject, bearing in mind community standards for humane expression. We had many excellent submissions that resulted in the inclusion of a wide range of writing and poetry by some 40+ authors in an anthology, Atlantic Currents: Connecting Cork and Lowell, published in April 2020 by Loom Press of Lowell, Massachusetts.

To continue to promote and support creative and experiential writing, we created a similar anthology containing work written by students and any alumni of the University of Massachusetts Lowell (UML) and University College Cork (UCC). The submissions were reviewed and judged by writers from Lowell and Cork. Our judges in the US and Ireland selected 18 prizewinners from some 90+ submissions. Prizewinners were grouped into alumni and current students at the two universities. That several first, second, and third prizes were tied speaks to the quality of the submissions. In addition to these prizes and the recognition of our winners, their work is published in Atlantic Currents II Connecting Cork and Lowell.

This writing contest would not have been possible without a generous grant from Independent University Alumni Association of the University of Massachusetts Lowell and the financial support of the President’s Office of University College Cork, Ireland.

The Patrick J. Mogan Learning City Award is to be presented annually to the individual, group or organization who best represent, promote, and embody the values and beliefs about education of Patrick J. Mogan

Dr. Mogan, was an educator and visionary who believed the city of Lowell could serve as an active agent for helping people reconnect to their cultural traditions and be a model for other communities around the nation. He was a leader in the successful effort to create Lowell National Historical Park. He believed deeply that human development could only be built on the experiences of living in a community – a classroom without walls.  He wrote that an “educative city” could only evolve where “various elements of the city could serve as educational resources and experiences for preschooler’s and elderly alike.”  His ideas and work are embedded in the ideas and perspectives that drive the Learning City.

In 2010, Bill Samaras retired from a 44-year career with the Lowell Public schools as a teacher and administrator. For the last 20 years of his tenure he was the Headmaster of Lowell High School.

Born in Lowell, Bill was raised in the city’s Centreville neighborhood. He graduated from Lowell High in 1959.  He holds degrees from Boston University, Salem State College and Northeastern University. Since retiring from Lowell High School, Bill has held several positions in the Haverhill Public Schools. He was elected to the Lowell City Council in 2013 and served as Mayor from 2018 until 2020.