In 2006 I wrote the following WUML Sunrise essay.  It was inspired by a Cold War relic discovered while browsing through a salvage/antique shop.

The nuclear survival guide, “Protection in the Nuclear Age”, struck me as quaint and out-of-date given that we were in a relatively warmer era with no imminent threats.  So quaint that I took a humorous approach to a subject that kept so many of us on edge as we grew up in the 50s and 60s.  Being a Catholic school student at the time, I would tense up during class each time when a jet screamed above and I quickly recited the Act of Contrition lest this be the one.  Better safe than sorry as even at that age I wasn’t buying the “duck and cover” survival tactic.

With the war in Ukraine and the veiled threats of nuclear usage along with other nuclear hot spot stories heating up I thought this piece might be even more timely if not altogether comforting.  I no longer remember the Act of Contrition nor think it would save me in a flash but I do hope that these current threats and tensions ease and that the world returns so some semblance of peaceful sanity.

I also hope that this survival guide remains an unintended example of quaintly dark Cold War humor.  And that I don’t ever have to consider digging a hole in my back yard—except for a new tree or shrub. 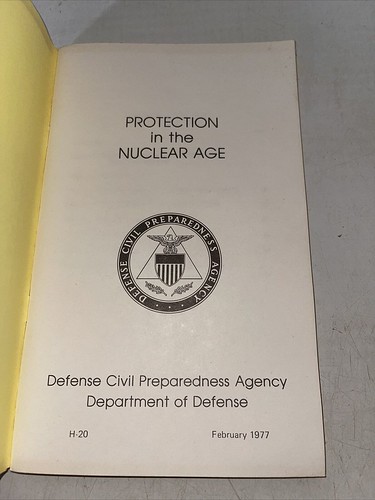 I enjoy spelunking through antique shops and salvage barns.  You never know what you’ll find.  It was in a dimly lit barn filled with ornate mantles, antique plumbing and thick, oversized doors, all displayed in a maze of organized disorder that I found a flashback item.  I was rummaging around Architectural Salvage for some original door hardware.  Among the bins of tarnished locksets and hinges, a burst of bright orange caught my eye.  Closer inspection revealed a pile of instructional handbooks, published in 1977 by the Defense Civil Preparedness Agency.

Curious, I picked one up and as I thumbed its moldering pages, I was suddenly back in the days of “duck and cover”, when my heart skipped a beat every time jets passed overhead.  It skipped again when I learned that the Defense Civil Preparedness Agency was absorbed by FEMA and is now part of the Department of Homeland Security.

If you thought evacuation and relief efforts in New Orleans after hurricane Katrina disastrous, imagine the bedlam in the event of a nuclear attack.  But don’t worry.  As outlined in the handbook, “Protection in the Nuclear Age” preparedness will enhance our chances of surviving Armageddon.

“Protection in the Nuclear Age” is at once an ominous, cheery and naïve little manual, balancing dire predictions that “millions of Americans would die if a nuclear attack should occur” with optimistic statistics, citing studies that show that tens of millions would survive.”  It assures us that in the event of an attack, we “would not be alone.”  The “entire Nation would be mobilizing to…hold down…loss of life” and “assistance would be available” from all levels of government with “effective emergency preparations and actions.”

This handy booklet assures us with near certainty that, like oncoming hurricanes, “incoming…missiles would be detected by networks of warning stations.”  Some of us might have up to fifteen minutes warning, others nearly an hour.  A variety of signals would alert us in the event of an actual emergency.  These might be wavering, staccato blasts on “whistles, horns or other devices” indicating an attack has indeed occurred or a long, steady wail directing us to radio or TV broadcasts for further instructions.

If a fireball on the horizon is the first inkling that doom is on the way, expect a full “5-15 seconds before being seriously injured by the heat,” perhaps “15-60 seconds before the blast wave arrived.”  Moving quickly is, of course, of grave importance, so “take cover instantly.”  My guess is that many of us, anxious to share the news with friends, wouldn’t get past speed dial on our cell phones or onto our favorite social media ap.  But, if you’ve read Chapter 2 and you’re the cool-headed type, there are short-term shelter options–sewers, caves and culverts.  In a pinch, crawling under cars or heavy furniture will have to do.  Finding yourself out in the open with no other options, you are advised to “simply lie down on the ground and curl up.”  My guess is that a fetal position would be the go to curl up.  Should you survive, hustle over to a public fallout shelter after the heat and blast waves have passed.  Unfortunately sturdy public shelters are rare these days what with church closings and new public buildings more gunite than granite.

This underscores the importance of preparation and personal responsibility.  Chapter 3 has cool ideas for basement shelters, including one that doubles as a peacetime “snack bar”.  For us slackers, clueless and facing a flurry of fallout, there’s always the first little pig option.  Just dig a hole 4 feet deep and 3 wide and mound up the dirt 1 to 2 feet around the perimeter.  Cover with a few solid doors, say a prayer and you’re good to go. If, like the smart little pig, you want a Four Star shelter impervious to either wolf breath or Bear missiles, plans are available.

Don’t have a nuclear hardened bunker?  Evacuation before an attack is the key to your survival.  Chapter 7, “The Relocation Option”, is where the reality of Katrina collides with bureaucratic best laid plans.  Assuring us that agencies are “planning for the orderly relocation of people in time of…crisis” the chapter outlines steps to take before boarding evacuation buses or driving to our assigned “reception area.”

Granted, this amusing booklet is a bit dated, printed before the Blizzard of ’78, but imagine you’re in a high risk zone and have been warned that bombs are on the way.  If not channel surfing for the best live coverage from ground zero and the latest fallout forecasts, your first task is to secure ample supplies of prescriptions and special foods.  Sure.  With 8 inches of snow forecast stores become gridlocked, panicked shoppers suddenly driven to a feeding frenzy and the realization that they have no shovel.

If you plan to evacuate by car, don’t forget to stop for gas.   And, in addition to “shovels, picks, hammers, and work gloves” be sure to pack clothing, bedding, food, utensils, water, flashlights, soap, detergent, towels, a garbage can, an emergency toilet, and medical supplies.  Oddly, there is no mention of pets.

After reading through this quaint little guidebook, which I thought a bargain at $5, I considered buying a couple of antique doors to have at the ready should I need to quickly improvise a snug shelter.  Upon closer inspection, however, I abandoned that idea.  The doors were thick with layers of lead paint which studies have shown to be dangerous stuff.

So if the sirens ever wail, I’ll just scamper down the nearest manhole and hold my nose until the whole dustup blows over.

One Response to “Evacuations” by Henri Marchand