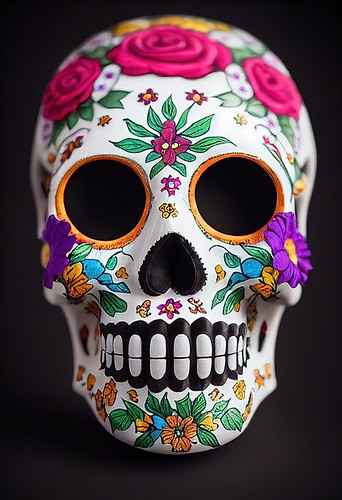 Living Madly: Day of the Dead

Traditionally observed on November 1 and 2, the Day of the Dead originated in Mexico, where it is mostly celebrated. Several sources say the holiday, during which families get together to commemorate and honor their deceased relatives, is an amalgamation of ancient Aztec customs, the Roman Catholic Feast of All Saints, and All Souls Day, the latter two of which are observed on November 1 and 2, respectively.

Unlike Memorial Day—the closest thing to the Day of the Dead we have in the U.S.—which is considered a solemn occasion, the Day of the Dead is meant to be joyful. It’s a time set aside for people to recall happy memories of their departed family members, full of brightly colored decorations and costumes, sweet treats, and ornate floral displays.

I never thought much about the Day of the Dead until recently, when my two sisters and I spent a Friday afternoon cleaning out some of our mother’s things. For days beforehand, I dreaded the idea of doing it. I pictured the three of us riffling through boxes, crying, wads of damp tissues littering the carpet. But it wasn’t like that at all.

My mother has been dead for a little more than two years. Over that time, it’s sometimes been difficult for me to get my mind around the fact that she’s really gone. As much as it brought home the fact that my mother’s loss is real and permanent, helping my sisters go through her clothes and jewelry helped me to remember her and the life she lived in ways I wouldn’t have otherwise.

We found books and toys my mother saved from our childhoods, all of which brought back memories of her reading to us, of Christmas mornings and birthdays, of my mother at the stove making grilled cheese sandwiches, hollering at us to set aside whatever thing we were playing with and come eat lunch.

In her jewelry box, we found her high school class ring, so tiny that we couldn’t help but marvel at the fact that her fingers had once been that small. We came across a silver signet bracelet engraved with the name and death date of a former boyfriend who died in the Vietnam War, a helicopter pilot named Charles. Until that moment, none of us had known that he existed.

In a cabinet in the living room, we discovered candles of various scents, shapes, and sizes— enough to last several years. We laughed, remembering our mother’s inclination to overprepare for adverse events like power outages, as well as the fact that the three us tend to do the same thing.

Tucked away in a drawer were piles of photographs. One was of our mother, who looked to be in her late 20s, sitting on a beach wearing a cowboy hat. The sky was overcast, but she was smiling. We could tell she wasn’t smiling for the camera. She was genuinely happy.

At one point in the afternoon, my stepfather came in with a bottle of French cabernet and three glasses. He set them down on a table and retreated to the garage. I remember thinking how lucky it was to have the opportunity to spend a weekday afternoon with my sisters, neither of whom I get to see very often.

We boxed up those of my mother’s things we wanted to keep for ourselves: books and quilts; her favorite pair of scissors. And we set aside things for each of our own children to remember her by, things that would help us tell them the stories about her that they should know, so that someday they can tell them to the great-grandchildren my mother will never see.

These days, the Day of the Dead is often conflated with Halloween, at least in the U.S. by those of us who aren’t of Mexican heritage. Walk into any grocery store or pharmacy and you’ll find sugar skull decorations mixed in with bags of mini Snickers bars and pumpkin carving kits. Although this type of thing is pretty typical of corporate America, I think it’s too bad.

I understand now why the Day of the Dead is important: It’s a celebration of life, reminding those who observe it that who we are and what we do while we’re here on earth matters more than we think, especially to the people who love us.

Rather than the emaciated cancer patient my mother became at the end of her life, I’m now able to remember her as she was when she was healthy and whole, young and beautiful, full of energy and laughter. I can see her standing at the end of the dirt road we lived on when I was four, clapping for joy as I rode away on my bike without training wheels for the first time. I can hear her cheering me on.