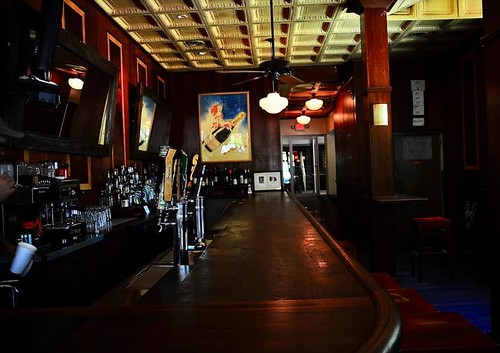 Stu backed my van out of the inspection bay and climbed out. My eyes went to the sticker on the windshield. REJECTED.

“It needs rubber, you got air showin’ through. And the horn doesn’t blow.”

“All I do for you, you couldn’t just tell me? You’ve gotta reject it?”

Stu shook his head with genuine pain. “Once I plug you in, I got no choice. Plus, you’re over in carbon emissions.”

“Not this big. Anyway, you can still drive. You get a week. Leave it today, I’ll put new sneakers on it, do something with the exhaust.”

“I can’t today. I gotta find a job.” Chipotle wasn’t making it.

Stu and I went back a dozen years, to high school. We’d been in a rock band. The Parallelograms. Locally, we were all that for a while. He played drums, we had a guitarist, a singer, I was keys. But he saw there was no living in it and soon he had a wife and a kid to care for. More than I had. He and his brother-in-law owned the gas station.

“I tell people if they need good work done, come here. I say you’re my mechanic. You’ve got magic hands.”

“With magic hands. I say it the way people say ‘my attorney’ or ‘my therapist.’ It’s personal.”

“Hmm, okay. Thanks. Bring it by when you want me to fix it. Don’t wait past a week though.” Then, thinking of something, he said, “Hey, you’re still giggin’, right?”

Unlike the others in the band, I’d clung to some illusion of integrity, and the pipe dream of a career. I’d kept my chops up and sometimes sat in with a jazz ensemble for fun and tips. “You know the Greystone?” he said. “Suze and I were out there couple nights back, driving by. I seen a sign. Looking for a piano player. Might be something for your magic fingers.”

I drove out past the beach, lonely-looking in March, out to the Point where the old Greystone Inn stood. It had once been a nightspot for the rich. It sat vacant for years. Recently some development group had sunk money into it. A marquee said it was opening soon. I saw the sign Stu mentioned: PIANO PLAYER WANTED. It wasn’t yet noon. I considered going home to get my résumé and put on better clothes, but what the hell, I was there.

I bypassed the parking lot (nothing says loser like a “rejected” sticker and the name of a forgotten band—The Parallelograms—still showing through the paint job) and parked along the shore road and hoofed back. At the front desk I introduced myself to a woman about fifty, in black with short straw-blond hair, and asked about the piano gig. She looked me over. “Come with me.”

I followed her through a swank bar and into a dining room. Floor-to-ceiling windows offered views of the water, steel blue now, losing some of its winter gray. In an alcove stood a glossy grand piano. “Nice,” I said.

“Try it,” the woman invited.

“Now?” We were the only ones there.

I sat. “Anything particular you wanna hear?”

I flexed my fingers and noodled a moment. The instrument had good action. I slid into a moody Nina Simone-styled “It Might as Well be Spring.” The keys were responsive, the tone of the instrument resonant and rich. My hands moved with sureness.

“Want something else? More current?”

I rose, uncertain. She was looking me up and down. I wished I’d gone home first and changed. “I can send my résumé,” I said. “Uh . . . just so you know, I didn’t quite finish at Berklee, but I do have a lot of exper—”

“Send it along if you want, so we have it on file.”

“I’ve got a repertoire in my head . . . standards, some jazz. Billy Joel.” I left out headbangers; this wasn’t that kind of place. “I read music, and I can use an iPad.”

Her smile was cool. “You obviously know where the fingers go. That’s the main thing. The optics.”

She sat at the piano and poised her hands. “‘Body and Soul’,” she said softly. And began to play it. The reading was smooth and mellow. What did she need me for? I watched in growing uncertainty, then . . . I saw it. Her fingers were dancing around randomly, barely touching the keys. “You’re not really—”

“I can’t play a note. Don’t know how. ‘Take Five’” she murmured. Again, her fingers were clueless. The piano was playing Brubeck. “It’s voice recognition,” she said.  “Everything’s in the piano’s computer brain.”

I frowned, disappointed. “So, anyone could do it.”

“But many. A lot of people can play some piano, maybe not great, but—”

“Yes, and if any of them were here dining and looked over and saw me here, they’d see I don’t know anything. They’d see it was fake and it would kill the entire illusion. Word would get out, and—” she waved her hand to indicate the dining room, the ocean views, “and the entire experience would come crashing down.” She stood up. “We know our patrons very well.”

“We haven’t opened yet? True. But we’ve done our research. We know what cars they’ll drive to get here, and what they’ll tip the valet. We know the colors they want in the drapes and carpet, and how much lighting. What they’ll wear, drink, and eat—and the music they like. And most importantly, we know what they’ll spend. It’ll be a lot. It’s why we need you, Alan.”

“You know how to play piano. And with this baby you not only can name a song but the styling you want. Funky, bossa nova, smoky late-night lounge—it’s all in here.” Gently, she patted the instrument’s lid. “You whisper it, the song will come up. Magic. The job is four nights a week, Thursday through Sunday. It pays three-fifty a night, plus you can double it in tips.”

I was doing a quick calculation of how many months of shifts at Chipotle would add up to the dough she was talking.

“Forget the résumé,” she said, “if you want the job, it’s yours. Have you got a tuxedo?”

I was thinking of my poor old van out there with its bald tires and silent horn. Thinking about Stu’s magic fingers, and mine. Thinking of dreams. She was looking right at me, through me. “Well, Alan?” she said.