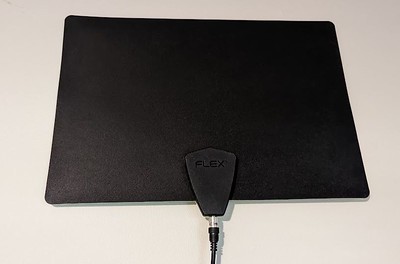 I bought a TV antenna last week. I haven’t taken the cord cutting plunge completely, at least not yet. This is more of an experiment. We have two TVs in the house. The main TV in the family room is big but modest in terms of what’s out there now. It’s attached to a Comcast cable and has access to several streaming apps like Amazon Prime and Netflix via WIFI. Then there’s a small TV in the office. It’s rarely watched but it also is outfitted with a Comcast cable box, a miniature one that serves as a digital converter. There are monthly fees for both cable boxes, not outrageously priced but they add up.

The “clicker” for the main cable box recently stopped working. When I dropped into the Xfinity store on Plain Street to get a new one, the customer service rep looked at my cable clicker like it was a rare antique, saying, “We haven’t had something like this for a long time.” (Did I say we don’t watch much TV?) He said the cable box that went along with this clicker was likely outdated so I should bring it in and swap it for a new one which is all covered by what I’m paying now. I haven’t done that yet, but I plan to, imminently. When I do, I’m going to also turn in the smaller cable box and cut that cord to that TV entirely. That’s why I bought the antenna.

Before I buy just about anything these days, I go to a site hosted by the New York Times called Wirecutter. It’s like a 21st century version of Consumer Reports. Consumer Reports lost my confidence long ago; Wirecutter hasn’t steered me wrong yet.

Wirecutter recommended a particular indoor TV antenna and provided a link to it on Amazon where it was reasonably priced. I placed the order and the antenna showed up two days later in an oversized puzzle box. My most recent experience with indoor TV antennas was at least 20 years ago. Then, the device resembled a reconstructed coat hanger with a wire trailing from it. This new one was more like a vinyl place mat with a coax cable attached to it. The antenna is to be stuck to an interior wall oriented towards the biggest collection of TV transmitters within 35 or so miles. A helpful smartphone app downloadable for free from the Google Play Store (I use Android, not Apple) plots nearby TV transmitters on a digital map. Unsurprisingly, most of the ones in range are to our south, at or near Boston.

I tentatively placed the antenna on a south-facing wall, plugged the coax into the TV and turned it on. A few clicks took me to the “scan for channels” function and suddenly numbers started scrolling upward like on a gas pump. Soon, I had 45 channels registered. For someone who recalls the launch of UHF channels 38 and 56 to be a big moment in TV history, 45 channels over the air was impressive. But would they be watchable or would the staticky picture and sound be a distraction?

Amazingly (to me) there was no static or snow or wavy lines or anything else to detract from a very crisp picture and clear sound. All the major Boston and regional channels were there along with many I had never heard of. Some seemed interesting, others left me wondering “who puts this on the air?” Quite a few were “subchannels” of major stations. For instance, Boston’s Channel 7 is my Go To station for local news and weather. Those programs were on channel 7.1 but there was a 7.2, a 7.3, and a 7.4. I seem to remember a decade ago reading about digital TV signals which were stronger but narrower (in the electronic spectrum sense) than what preceded them. That allowed stations that had relatively wide bands of frequency assigned to them to split it up into several digital stations. The reception on all of them was fine.

The true test will come soon. I’m not a huge football fan but I do find that football on TV is good background noise when I’m working on my home computer. While I won’t get ESPN via the antenna, there’ll be plenty of football. Plus, there’s an old Amazon Firestick that is also plugged into that set. It’s a refugee from the “big” TV’s predecessor but it still works. I’ve barely begun discovering what’s on that.

I’m excited about exploring what my new TV antenna draws in. I’m happy to again be able to say, “over the air” and mean it literally (since programs coming via cable aren’t “over the air” but are “over a wire”).

2 Responses to Cutting the Cord, Step One