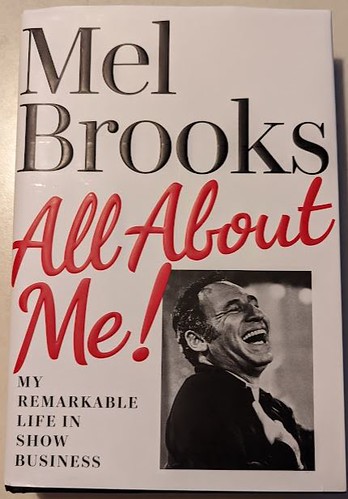 Review of “All About Me: My Remarkable Life in Show Business”

Midway through my freshman year in college, I was bumped up into the school’s honors program. It was a small group and most of our classes intensely focused on literature, philosophy, and the arts.

A few weeks into it, I was summoned to the office of the director of the program for a mandatory interview. His first question to me was, “Can you describe the cultural influences on your life thus far?” I sat there mute. Cultural influences? I was an 18-year-old from Lowell. I had no idea what cultural influences were, never mind which ones had influenced me. I mumbled my way through the interview and scraped by in the program.

As life went on my interest in things like architecture, art, music, literature, and theater grew. If I was asked that cultural influences question today, I would have a ready answer. But if the question asked was a repeat of the one posed in 1977 – what were the cultural influences you had as an 18-year-old – I would still struggle for an answer. Until last week, that is.

My enlightenment came from reading All About Me! My Remarkable Life in Show Business, a memoir by Mel Brooks. Reading the chapter on Blazing Saddles, I was transported back to the Chelmsford Drive In and a car full of friends who howled with laughter and gasped with incredulity at what we saw on the screen and heard from the speaker hooked on the driver’s side window. It never occurred to me that this hilarious movie was culture, although it was.

The current realization came together quickly. Nurtured on Three Stooges shorts on the Major Mudd morning TV program while in elementary school, then graduating to All in the Family in junior high, comedy was central to my upbringing. And by high school, the impresario of my cultural enlightenment was Mel Brooks. Blazing Saddles led to Young Frankenstein and High Anxiety. Others followed but by then I had moved on to Animal House and The Blues Brothers.

All About Me is a fast-paced tale of Brooks’ life from its start in an impoverished secular Jewish family in New York City. Small in stature and the youngest of four brothers, Mel would be the last one selected for pickup games, but he honed his comedic skills on the street corner where making the bigger kids laugh was the surest way to avoid harassment or even an undeserved beating. A summer job as a busboy at a Catskills resort led to helping with the peripheral needs of the resorts’ entertainers and soon Mel was on stage telling an occasional joke. His life interrupted by World War II, he found himself in a combat engineer unit in post D-Day France, searching for booby traps in recently captured villages. During a break from disarming explosives, Brooks made such a pest of himself at a USO show that he drew the attention of the organizers and was soon transferred to Special Services where he was put in charge of organizing entertainments in the months following V-E Day.

Returning to America, Brooks snagged a low-paying position with Sid Ceasar’s Your Show of Shows, the top-rated TV show in America for much of the 1950s. (Watch this YouTube clip for a sampling). That show flamed out with the arrival of the 1960s and Brooks, desperate for work, developed and produced the network TV comedy Get Smart. That led to his first movie project, The Producers, which was a great success.

Along the way, Brooks developed and nurtured a posse of writers and actors (Gene Wilder, Harvey Korman, Marty Feldman, Madeleine Kahn, Cloris Leachman, Dom DeLuise) who appeared in many of his films. A love for the movies developed as a kid in New York City presented an almost infinite stream of film concepts that “honored” traditional genres while leavening them with outrageous comedy that made the films hugely popular and kept them from being mere remakes of the originals. The American western gave us Blazing Saddles, the great monster movies gave us Young Frankenstein, Alfred Hitchcock’s catalog gave us High Anxiety, and Star Wars gave us Spaceballs.

As the book nears its finish, Brooks explains how he rejected a theater executive’s entreaties to bring The Producers to Broadway but eventually succumbed to the other fellow’s persistence. Casting Nathan Lane and Matthew Broderick as the leads, Mel Brooks’ The Producers became the most successful production in the history of Broadway, winning 13 Tony awards in its debut year (Hamilton won 12).

Brooks writes extensively about the close and collaborative relationship he had with his wife, Anne Bancroft, a marvelous actor in her own right. She died of cancer in 2005 at age 75. Her death takes up hardly more than a sentence of the book, almost a footnote. Given the volume of mentions of their collaborations during life, the account of her passing seems abrupt. Maybe it was still too painful for Brooks to write about it, or maybe he felt too much talk of death would deflate what is intended as an uplifting train of amusing anecdotes. Whatever the reason, it seems a rare gap in this otherwise comprehensive life story.

And it’s a life story that continues. Born in 1926, Brooks is chugging along towards the century mark. At the time of the book (2021), he was still performing. He loved to travel and see old friends, so he selects a theater in some place he wishes to visit and books it for a night. The show consists of him sitting on stage with an interrogator firing questions at him. His irreverent, always unique, and unexpected answers still delight the crowds and himself.

4 Responses to Culture Where You Least Expect It