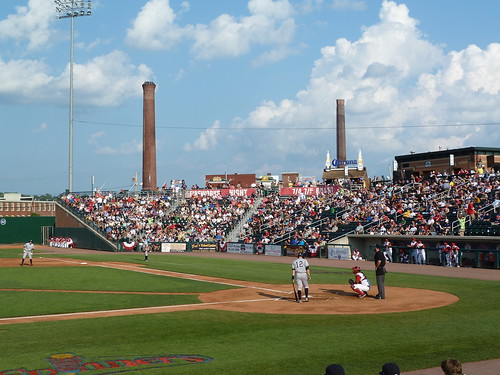 In late 2020, the Boston Red Sox announced that the Lowell Spinners were being disbanded due to Major League Baseball’s contraction of the minor leagues. In response, I write the following essay which appeared in Banker and Tradesmen in early 2021.

Lowell Called Out, But Look for Extra Innings

The Red Sox’s Christmas gift for the city of Lowell came early last month. Unfortunately, it was a lump of coal. The Sox ended a 26-year affiliation with the Lowell Spinners of the Class A New York-Penn League, a consequence of the Major League Baseball’s (MLB) mandated contraction of minor league teams from 160 to 120 (four per major league club).

In the face of community opposition to the decision, there is talk of an MLB “rookie league” team in Lowell in 2021 and even a new affiliation in 2022, but nothing is definite. The move hurts the city, both financially and psychologically, especially following the outright cancellation of the 2020 season due to the pandemic.

Some history is needed to fully appreciate the cost to Lowell of losing the Spinners. In the early 1990s, the bursting of that era’s real estate bubble hit Lowell hard, its impact symbolized by the 1994 foreclosure auction of the Lowell headquarters of computer giant Wang Laboratories. Assessed by the city at $60 million, the three towers sold for just $525,000.

Economic adversity was nothing new for Lowell, but the city has a well-deserved reputation for perseverance because each downturn has brought forth new plans to revive the city. Leading the revival in the mid-1990s was former U.S. Senator Paul Tsongas.

Lowell native Tsongas was elected to the City Council in 1969, Congress in 1974, and the Senate in 1978. Cancer sidetracked his 1984 reelection effort, but with the cancer in remission, he ran for president in 1992, losing the Democratic nomination to Bill Clinton. Instead of heading to Washington for lucrative lobbying, Tsongas stayed home to be the city’s unofficial economic development czar.

Among the many things Tsongas advocated was a professional sports team in Lowell. He knew that a minor league team would elevate the city to a higher echelon of communities, both in the eyes of its own citizens but also in the perception of those outside the city. While successfully pursuing an American Hockey League franchise (which became the Lowell Lock Monsters), Tsongas also landed a professional baseball franchise for the city. He orchestrated the move of the Elmira Pioneers to Lowell while concurrently obtaining a Red Sox affiliation.

Named dually for textile loom operators who brought the city world fame in the 1800s and a baseball term for a curve ball, the Spinners debuted in 1996, playing at a refurbished high school field while Tsongas and city leaders convinced state politicians and UMass Lowell to allocate funds for a 5,000-seat baseball stadium on the south bank of the Merrimack River near the University’s East Campus.

LeLacheur Field (named for longtime Lowell state Rep. Edward LeLacheur) was ready for the 1998 season. Designed by HOK Sports Group, architect of Camden Yards in Baltimore and Coors Field in Denver, the Lowell park used red brick to join the “mile of mills” that lined that stretch of the Merrimack. River. Views created by the summer sun descending in the western sky over the park added value to the $5 ticket, but there was much more.

For baseball fans who watched Fenway become more pricey, the Spinners offered professional baseball at an affordable cost. To be part of the Red Sox farm system, the Red Sox family, was priceless as they say in the credit card ad on TV. Red Sox Nation is a cultural identity in New England. Lowell was a star on that map. In pure baseball terms, it was a joy to sit at LeLacheur and see young talent on the way to the big league. Beginning with Wilton Veras in 1999, more than 110 former Spinners made it to the majors including Kevin Youkilis, Jacoby Ellsbury, Jonathan Papelbon, Jackie Bradley, Jr. and Mookie Betts.

The Spinners also excelled at everything that made minor league baseball a cultural phenomenon in the late 1990s. From “dizzy bat races,” to Extreme Blue the Frisbee Dog, to Jack Kerouac bobbleheads, Lowell had it all. During the game there were hot dogs, ice cream and cold beer; after innings came “kids run the bases” and fireworks.

In the late 1970s when I was away at college and then in the U.S. Army, whenever people asked where I was from, I would answer “Boston” not because I was ashamed of Lowell but because few had heard of it. Decades later when traveling the country, my answer to that same question was “Lowell” and it would often be met with a spontaneous response that “the Spinners are great.” Lowell’s recent renaissance had many elements, but the Spinners were a big part of it.

Historically, Lowell’s citizens have recognized that a failed venture is an opportunity awaiting a new idea. Because that spirit persists, there will be baseball at LeLacheur Park in the years to come. But whatever form it takes, it is unlikely to capture the magic that the Lowell Spinners brought to the city for the past quarter of a century.