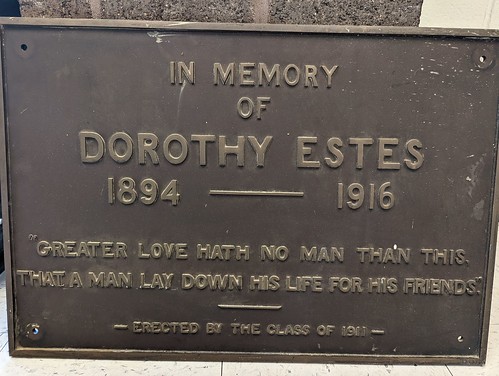 The above plaque was recently found while preparing for this summer’s renovation work at Lowell High School. The plaque reads:

Dorothy Estes was born on July 1, 1894, in Lowell. Her father, Frederick A. Estes, had been born in Mason, New Hampshire, and worked as a clerk. Her mother, Emma F. Estes, had been born in Lowell. According to the 1900 census, the Estes family lived at 35 Burtt Street in the Highlands. The census also indicated that Mrs. Estes had given birth to four children but Dorothy was the only one still alive. The 1910 census showed that the family had expanded with another daughter, Barbara, being born in 1903.

Dorothy attended Lowell High School and was an excellent student. She was the salutatorian of the class of 1911 and one of the Carney Medal recipients that year. She returned to the high school for a post graduate year (which was a thing back then) and began at Wellesley College in the fall of 1912. 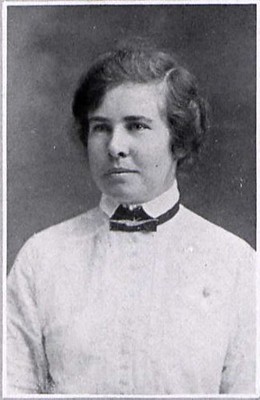 Wellesley was a good fit for Dorothy. She excelled in academics and participated in many extracurricular activities. Among her closest friends there was a sightless classmate. The two were said to be inseparable. That experience led Dorothy to enroll in an advanced education degree program at Columbia University when she graduated from Wellesley in May 1916.

However, the Columbia program didn’t begin until September so Dorothy returned to her family’s home in Lowell for the summer. Her sightless friend from college went to work at the Perkins School for the Blind. That summer, the friend chaperoned a group of sightless female students on a multiweek stay at Pentucket Pond in Georgetown, Massachusetts. Unable to stay there the entire time, the friend invited Dorothy to take her place as the “camp counselor.”  Dorothy agreed and, accompanied by her 12 year old sister Barbara, traveled from Lowell to Georgetown and took charge of the girls.

Their daily routine involved walking to the beach and wading in the shallow water at the pond’s edge, however, within a few feet of the shore, the land under the water dropped precipitously to a depth of 15 feet. On August 10, 1916, Dorothy was on the beach watching the girls in the water when she noticed one edging toward the deep part of the lake. Dorothy called to her but the girl became disoriented and started walking further into the lake. Seeing that, Dorothy raced into the water without even removing her shoes. She reached the girl just as she stepped off the shelf and into the much deeper water. Although Dorothy could swim, the girl could not. She panicked, grabbed Dorothy around the neck, and dragged them both underwater.

Barbara (Dorothy’s sister) had returned to their cottage so the only people on the beach were the other sightless girls. Hearing what was happening, they formed a human chain and edged into the water but when those at the end plunged into the deep water themselves, they struggled back to shore and abandoned their rescue effort. Their screams brought the caretaker of the cottage to the beach. He jumped into the water, quickly located Dorothy, and pulled her out. First he and then a doctor who arrived spent an hour trying to revive her but she was dead. Others who arrived searched for the body of the other girl which they located and recovered several hours later. 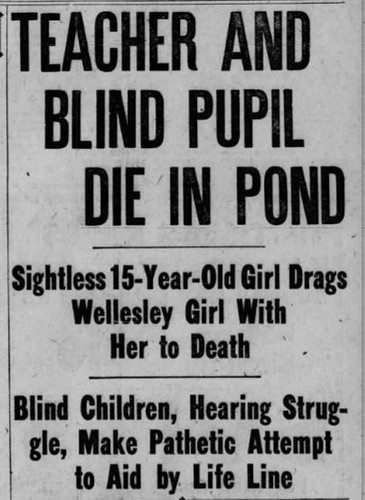 Dorothy’s body was returned to Lowell. A funeral service was held at her parent’s Westford Street home on Sunday, August 13, 1916. She was buried in the family lot at Edson Cemetery.

It is unclear when the plaque was created or where it was installed at the high school.

As for Dorothy’s family, her father, who worked mostly as a real estate appraiser but was best known for his service with the National Guard in the Mexican American War and in World War One, died in 1936. Her mother died in 1940. Her sister Barbara also graduated from Wellesley and had a career as a social worker. Barbara died in 1941 at age 38. Her obituary reported that her death followed a long illness.