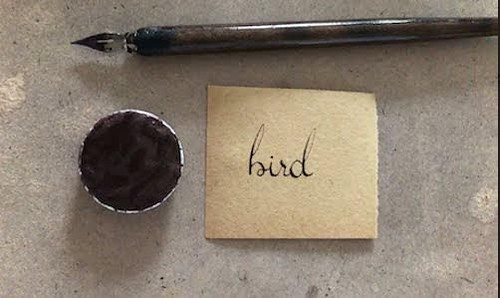 Living Madly – Word from the Bird

When I was in middle school, I spent a lot of time reading dictionaries. I did this for fun. I especially liked the Oxford Dictionary of English Etymology, a colossal multi-volume publication that, due to its size and expense, I had to visit the library to use.

At the time it was my dream to become an etymologist, a type of linguist who studies of the origins of words and the history of their meanings. I used to imagine myself combing through piles of moldering parchment in the cellar of some remote mountaintop monastery—a sort of desk-bound Indiana Jones—hunting for ancient words that no living person had seen.

Although this isn’t the career path I followed, I’m still fascinated by words and their origins. Yesterday while sitting in traffic, I spotted a van with the word carnicería painted on its side, which means “meat market” or “butcher shop” in Spanish. The word is derived from the Latin carnem, which translates to “flesh” in English. As I waited for the light to turn green, I found myself listing all the words I could think of also derived from carnem: carnival, carnage, carnivore, carnal, carnation. It’s geeky, I know, but I do it all the time.

I especially like words, and also phrases, that aren’t used much anymore. My husband, Rob, is always pulling words like this out of the ether and using them in everyday conversations. He’s especially fond of “icebox,” “ankle-biter,” “pavilion,” “shindig,” and “carafe.” He uses the latter frequently to describe just about any receptacle capable of holding more than one serving of a beverage.

Over time, I’ve determined that Rob’s tendency to use archaic words was inherited from his parents. My father-in-law often refers to blue jeans as “dungarees,” for example. He uses the old-fashioned New England term “tonic” to describe soda, “blister” for a grumpy older woman, and “geetoks” as an alternate word for the warm-weather footwear commonly known as flip-flops.

My mother-in-law uses the antiquated French word divan to refer to their living room sofa, which she pronounces “die-van.”

(Note: My maternal grandfather also called flip-flops “geetoks.” Since I’ve never heard the word used by anyone but him and my father-in-law, I suspect the term might have originated someplace in the South Pacific, as both of them were stationed in that part of the world while in the military.)

A lot of words and phrases we commonly use have origins of which most people are unaware. Among my favorites is “windfall,” which we understand to mean an unanticipated bit of good fortune. In Colonial America, the word literally referred to a tree limb that had been knocked down in a storm, an unexpected bonus in an era when gathering fire wood required a great deal of time and labor.

Other phrases like this include “sleep tight,” which originally referred to the preferred condition of the rope strapping used to support the mattresses on early beds. “Big wig,” a term we use to describe someone who is important or influential, comes from the oversize wigs aristocrats wore in 18th century Europe. “Break a leg,” a phrase often used to wish someone good luck, especially in the theater, has its roots in the German Hals- und Beinbruch, which translates to “a broken neck and leg.” Actors in the German theater often said this to one another before going on stage because they believed that actually wishing someone good luck would temp evil spirits to harm them.

Also interesting are common words that take on meanings other than that to which they literally refer. One of the best examples of this is the word “bird.” In addition to a feathered animal that lays eggs and the verb that describes searching for them, bird can also refer to one’s middle finger, as in to “flip someone the bird.”

Bird is also sometimes used to refer to an attractive young woman, especially in the U.K. This usage is thought by some to be the origin of the American slang term “chick.” The word can also refer to a difficult or long-lived elderly person, usually a woman, as in: “tough old bird.” It’s also sometimes used to describe someone who is unusual, as in: “He’s an odd bird.”

One of my favorite usages of the word bird is in the phrase “word from the bird,” used to reassure someone that you’re telling the truth after having said something fantastical or difficult to believe, such as: “I found a hundred-dollar bill on the floor at Market Basket, word from the bird.”

Interestingly, this phrase is also where the slang use of “word” as an acknowledgement, or to mean “truth” or “yes”—a usage common in contemporary hip-hop culture—is thought to originate.

2 Responses to Living Madly – Word from the Bird