Catherine and John Goodwin were iconic figures in the history community of Lowell. Catherine originated the very popular walking tours of Lowell Cemetery and led them for several decades. When age prevented her from continuing, she put out a call for a volunteer to take over the tours. I responded, she shared her research with me, and I’ve been leading the tours for many years now.

After Catherine and John passed away a dozen years ago and their daughter was preparing their Chelmsford house for sale, she contacted me and offered me some of the old books and papers that remained. I came away with several boxes of material from the 19th and early 20th centuries including several books.

From time to time, I use those books and papers to do research about Lowell history. Two weekends ago when I pulled out a book I hadn’t used previously, a small silver pamphlet was tucked in between the pages. Cut From American Cloth by Paul Marion, it said. Small world. The booklet, 19 pages long, is 7 inches by 5 inches in size, and is bound with twine. The inside cover shows that it was published by Loom Press in 2012 making this year this year its tenth anniversary.

I immediately read Cut From American Cloth which is an essay about Lowell. I had read it before in Paul’s 2017 Union River book but seeing it and reading it again in this silver booklet changed the way I looked at it. I was intrigued by its form. For nearly 20 years the internet has transformed publishing, and by “publishing” I mean the ability to share one’s written thoughts with others. Everyone with an opinion and the inclination to write has multiple platforms to choose from – blogs, newsletters, social media.

I’m all for online communications but I also believe that the printed book continues to be the best storage device yet invented. I also know that written communications existed and thrived long before the internet. To me, one of the most intriguing aspects of the era of the American Revolution was the culture of pamphlets, broadsides, newspapers and letters that propelled the Revolution and the ideas behind it. And communications of that sort had been around for several centuries by the time the Federalist Papers were written.

The discovery of Paul’s pamphlet among my century-old Lowell books was intriguing, so I asked him to share the story behind Cut From American Cloth. Here is what he wrote: 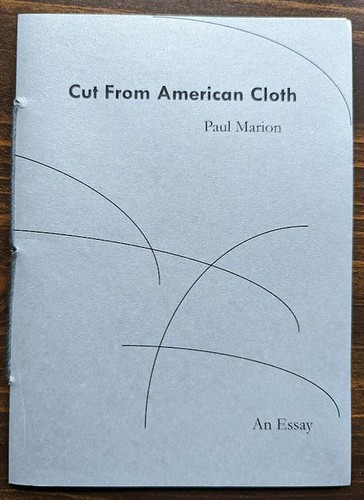 THE STORY BEHIND AN ESSAY:

MY FRIEND Dick Howe reminded me that 2022 is the tenth anniversary of the chapbook or pamphlet with my essay “Cut From American Cloth,” in which I use the South Common in Lowell, Mass., as a window to look at the American experience—from Native tribes to twenty-first century urban pluralism. The essay is included in my book Union River: Poems and Sketches (2017, Bootstrap Press), but had previously appeared in other places.

Around 2003, I had an idea that I thought might generate interest from one of the major publishers. I had edited the early work of Jack Kerouac for Viking/Penguin in New York with some success. Kerouac’s Atop an Underwood: Early Stories and Other Writing (1999) sold well in hardcover and paperback and was translated into Italian and French for release in Europe. I was eager to follow up with another book in New York. My idea was to write a biography of Lowell, the story of the city as a quintessential American place. The elements all seemed to be there, from a Native American village at Pawtucket Falls to the hub of the Industrial Revolution with the first large-scale textile factories and on to a distinctive role in the Civil War and later a microcosm of immigration and Americanization. Household and near-household names in U.S. History had roles: F. C. Lowell, Larcom, Dickens as visitor, Emerson, Poe, Crockett, Douglass, Butler, Lincoln, and others in the nineteenth century. For the twentieth century, I had a cast of known figures and lesser knowns who made distinctive contributions, up to and including author Jack Kerouac and U.S. Senator Paul Tsongas running for president in the early 1990s.

Before that plan had come together in my mind, however, I envisioned a different book, one with a tighter focus. I would take the park across the street from my house in the middle of Highland Street and use that as the setting for an extended essay or short book that would be a deep investigation of the South Common, twenty-two acres of open space set aside in 1845 for the public good. I began thinking about the South Common as my urban Walden Pond. But instead of H. D. Thoreau writing about the virtues of withdrawal from society and contemplation of the woods, I would explore the notions of community and social engagement as evidenced in and around the common. The very idea of a common was an embrace of one’s neighbors. The South Common book would be an anti-Walden story about joining, not quitting the civic scene. Surrounded by the building blocks of a city, the common is a representative setting with school, church, courthouse, businesses, transportation hub, homes, and playing fields, most of the component parts of a functional community. This was Wamesit territory before the colonizers came in the 1600s, and the approximate square of land was part of the farm-to-factory development in the region. After considering how to approach the tug-o-war with Thoreau, I didn’t do a deep dive on the anti-Walden theme, but rather wrote about the character of the common and some of the notable people associated with it, such as longtime Congresswoman Edith Nourse Rogers. Kerouac makes a cameo appearance as does one of Babe Ruth’s mentors who taught at the Catholic boys’ high school Keith Academy overlooking the common.

The essay “Cut From American Cloth” was first published in the UMass Lowell literary society’s annual journal, The Offering, in 2007. Lloyd Corricelli and David Daniel, the editors of River Muse: Tales of Lowell and the Merrimack Valley (Sons of Liberty Publishing, 2011), reprinted the essay in their anthology. Feeling good about the composition, I asked Ryan Gallagher and Derek Fenner at Bootstrap Press in Lowell if they would like to publish the essay in a letterpress form, a limited-edition chapbook, maybe four hundred copies. We didn’t do the letterpress printing, but they designed the book, which was released by my Loom Press in 2012. I kept the craft aspect of the publication by doing a hand-sewn or tied binding with waxed linen thread. The essay would appear again in 2017, reprinted in my collection Union River: Poems and Sketches, which Bootstrap did publish.

On a somewhat parallel track to the writing and release of the essay, I was working with my then-literary agent in New York, Sterling Lord, on a book proposal for the Lowell “biography” that he could offer to trade publishers in New York and elsewhere. The proposal was titled “Cut From American Cloth: The Rise and Fall and Rise Again of Lowell, Massachusetts,” which is wordy but says what I wanted to write about. At the time, we were seeing books about discrete subjects like cod and longitude. Doing a book on Lowell seemed plausible.

Lord shopped the book around in the early 2000s, sending the proposal to Doubleday and other major publishers. The Globe Pequot Press, which does a lot of New England titles, gave us the most positive response, but the acquisitions editor could not get the approval of her acquisitions committee. Other publishers decided that Lowell was not a large enough subject or a sufficiently known quantity to warrant its own book. Sterling Lord would later get a contract for Stephen Yafa, who grew up in Lowell, for the book Cotton: The Biography of a Revolutionary Fiber (Viking, 2006), with much about the Lowell mills, which has the single-subject focus as mentioned above in books of this type.

In 2010, I was approached by the National Park Service in Lowell, Superintendent Michael Creasey, about writing the story of Lowell National Historical Park for publication. Each park is required to have an institutional history on record. Sometimes these documents live in a file cabinet or online folder, and other times the park history makes it into book form. Creasey wanted an authoritative, reader-friendly narrative, the story of an innovative national park that helped spark a city’s comeback. Many dozens of magazine and newspaper articles about the Lowell renaissance had been churned out in thirty-plus years, but there was no book tying together all the facts and implications. Creasey pictured a regional and national audience of park professionals, preservationists, public history scholars, folklife researchers, industrial history geeks, urban planners, fans of Americana, and tourists in Lowell who would pick up this book in the gift shop at the Visitor Center.

The Park Service gave me free hand to write the story as I understood it without leaning on me in any way to shape the account. We were fortunate to find Rowman & Littlefield Publishers, known for issuing books by scholars and museum professionals. I wrote the story from 2011 to 2013, and the book was published in hardcover and paperback in 2014: Mill Power: The Origin and Impact of Lowell National Historical Park. Covering the revitalization of the city from the 1970s through 2010, with a re-cap of the full history of the city up front, this book wound up being a version of that city biography, the later years, that I had imagined. Like a lot of academic publications, the hardcover is wildly expensive, however, the Park Service offers the paperback edition at a fair price. UMass Lowell has used the book in some sections of its Honors College first-year seminar on Lowell. The book has been a regular seller at the Park gift shops at the Market Mills Visitor Center and Boott Cotton Mills Museum on the other side of town.

So here we are ten years after the chapbook-length essay, which has found readers locally and beyond. Thanks to Dick Howe for asking me to describe the back story. The larger narrative of Lowell and pre-Lowell has yet to be written, something to consider with the two-hundredth anniversary of the incorporation of the town of Lowell due in 2026. In whatever way the story is told (print, website, exhibition) the new, broader consciousness in the history field will require that a full account of the land, river, and people be told without any bias in the before-and-after bracketing of a timeline. The “Lowell” story doesn’t begin with investors from the Boston area aiming to build a a factory complex. The Peabody Essex Museum in Salem, Mass., recently reorganized its presentation of the history of northeast Massachusetts and the nation, integrating the experience of original inhabitants of what we call New England and the United States into a comprehensive story of all the people who have been and still are on this land.

Read Cut From American Cloth at paulmarion.com and buy a copy of Union River here.