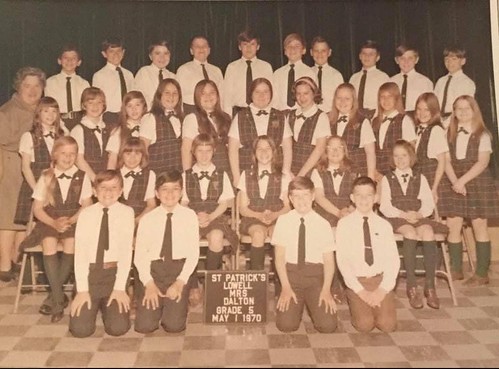 In the fifth grade at St. Patrick’s School, Lowell, MA when I was nine years old I had my first lay teacher Mrs. Dalton. Prior to and after fifth grade my classmates and I were taught by the Sisters of Notre Dame de Namur out of Tyngsboro.

Having a lay teacher was very different somehow and cool but I can’t remember if it got us out of kneeling on the chairs of our desks and saying the Holy Rosary.

Mrs. Dalton was a good-sized woman, cheerful bordering on jolly but she could be a disciplinarian when she needed to. It all seemed to come easily to her and in general her classroom had a lot less of the tension you might feel with the Sisters.

I remember a few occasions when she had a kind of talent show where some of us got up in front of the class and told a story. This wasn’t Shakespeare or the Canterbury Tales at that point in my life I barely knew who and what they were.  I guess I had seen a Three Stooges episode that morning before school so I did my best rendition of the episode where Moe, Larry and Curly are doctors.

Mrs. Dalton nearly busted a gut laughing which got all of us kids laughing and it was an uproar with me running around the class making Curly Whoop, whoop, whoop sounds. “Calling Dr. Howard, Dr. Fine, Dr. Howard.”

Just then our principal Mother Superior herself came through the door to see what was all the commotion and hysteria and she had a very stern and perplexed look with steam coming out her ears as she shouted “CLASS!”

We were all herded back to our seats and Mrs. Dalton wiped her brow with a handkerchief and met in the hall for a few minutes with our principal. That was the end of our excitement for the day or so I thought. We got back to our lessons after a few Hail Mary’s to cleanse the air.

At recess that day I was tossing around a hard rubber ball with some of my mates all in the school yard where kids were running every which way amidst the mayhem and I don’t know how or what got into me, I musta ate my Wheaties that morning because when I wound up and heaved that ball like a high fly to center field that ball was outa here right into the St. Patrick’s Church window.

Luckily it only broke the outer protective window and not the stained glass. Even more amazing no one seemed to notice! “Hey Bobby, where’s the ball?” “I thought you had it.” I sweated it out for a while and then just forgot about it until it came back to haunt me.

After school I walked home across the North Common Acre Lowell to our apartment at 8 Butterfield Street. My Ma gave me a cookie and some milk then sent me out to play in the Common until supper. I met up with some of my hooligan friends. I say hooligan, because that is how adults generally referred to us when we were in our little gang. I thought of it as a term of endearment.

We had a game we played where we would write something in code and hide it in some unsuspecting friend or neighbors’ premises. On this night we had the note in code ready to go. It would be something insulting starting with “Yo Momma.” We headed over to Broadway from the Common but we had to be very stealthy, clandestine so no one would see us in the act.

We got to our victims’ home and saw some clothes hanging on the line and so we hid the note in the shirt pocket of what looked to be our friend’s shirt and then we hightailed it outa there cutting through people’s yards until we got to Mrs. Dalton’s place, “Hey, what are you boys doing in my yard? Wait till I see you at school tomorrow you are going to see the principal!”

I had a tough time eating my supper that night and it was my favorite, baked mac and cheese. The next day we were ordered to stay after school where the principal gave us notes to take home to our parents with all our misdemeanors and crimes laid out and as for the punishment, being given the option of six whacks on the knuckles or six long division problems I presented my hands to the ruler. 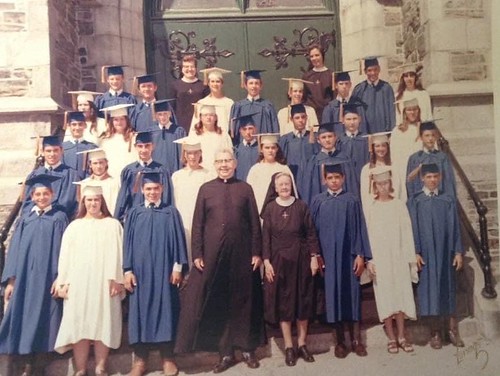