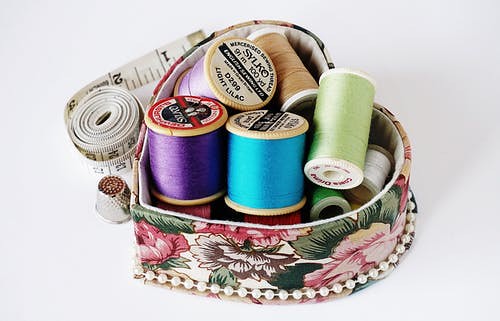 My maternal grandmother had a sewing room in her house that she jokingly referred to as her “sweatshop.” Once a spare bedroom, the space was home to her two sewing machines and hundreds of yards of fabric of all types and colors. Throughout her life, she made most of her own clothes, often from patterns she designed. This included complex garments like bathing suits, which she was famous for being able to whip up in just a couple of hours.

If you got a hole in your sweater, my grandmother, also a master knitter, could fix it for you, flawlessly matching the manufacturer’s stitch pattern. When you got your sweater back, it was always impossible to tell where the hole had been.

When my sister, Nathalie, and I were in elementary school, my mother sewed all our Halloween costumes. We got to trick-or-treat in sequined ball gowns and flowing black witches’ robes while the other kids in our neighborhood were stuck wearing the flimsy plastic costumes they sold at Woolworth’s.

My mother had a studio on the lower level of her house. Although she died more than a year ago, the room is still much as she left it, home to several sewing machines, a work table, plastic storage bins full of fabric, dozens of shades of yarn, water color and calligraphy supplies, embroidery hoops and floss, quilting tools, glass jars full of buttons, and a shelf crammed with books containing the instructions to make just about anything, from decorative paper cuttings to macramé bracelets.

She taught my sister and me how to use a sewing machine and make simple items like pillow covers when we were kids, but I was never really interested in sewing until I was in college. My senior year, I bought my own sewing machine, a major expense at the time. In addition to making several outfits for myself, I sewed a beautiful set of curtains for my first apartment, a luxury I never could have afforded to buy.

Traditional women’s handicrafts like sewing and weaving have provided families with essentials like clothing and textiles for much of human history. These domestic arts also provided women with a way to earn an income when few other options for employment were available to them, something that was true until relatively recently in the West and continues to be the case in other parts of the world.

Sewing and weaving have throughout history also served to give women agency, amplifying their voices at times when their opinions, ideas, and even their value as human beings have been viewed as marginal at best.

Examples of this can be found everywhere, from the suffragettes who used embroidered handkerchiefs to communicate with one another in the 19th and early 20th centuries, to the pussyhat-wearing political protesters of early 2017, to women living in modern day India and Nepal whose handmade pottery, jewelry, and clothing, sold through organizations like UNICEF, have given them the financial means to escape abusive marriages, prostitution, and forced sweatshop labor.

It’s even seen in literature. In the Pulitzer Prize-winning novel, The Color Purple, Alice Walker’s downtrodden protagonist, Celie—brutally raped, beaten, and abused by the men in her life since childhood—finds freedom and financial independence when she starts a business sewing pants for other women—a still-radical female wardrobe choice in the 1930s, when the novel was set, and one that clearly challenges the authority of traditional pants-wearers.

On a less dramatic scale, creating things allowed my mother, who suffered from an anxiety disorder, to express herself in ways she found difficult in other parts of her life. Always shy and reserved in public, the world inside her studio was hers to control. It was sometimes hard for her to tell people how she felt about them, but if she sewed you a quilt or a crocheted you a scarf, you knew.

Last summer, I dusted off my sewing machine and brought it to a local shop for a tune up. Finding their $20+ price tag ridiculous, I wanted to make a few neck gaiters to wear while hiking. I enjoyed making them so much that I sewed one for everyone in my family and several of my friends for Christmas. I began sewing other things, too. I made myself a cute wrap skirt, a fleece headband for my daughter, and some toddler-size facemasks for my four-year-old niece.

Rediscovering my passion for sewing has turned out to be an unexpected gift. It calms my mind in a way that nothing else has since the COVID-19 pandemic started. It’s also helped me feel more connected to my mother and grandmother and to appreciate their talents and the contributions they made to our family in a new way. Perhaps best of all, taking the time to create useful things from raw materials has helped me recognize that my skills and the things I make are part of a continuum of traditional women’s work that has bolstered human civilization for centuries. Of that I couldn’t be more proud.

Emilie-Noelle Provost, a longtime resident of Lowell, is a writer and the author of the middle grade novel, The Blue Bottle (North Country Press, 2018). She was the editor-in-chief of Merrimack Valley Media Inc., publisher of Merrimack Valley Magazine, from 2011 to 2016. Throughout her career, Emilie has written hundreds of magazine articles for a variety of publications. Her short fiction has been published in several literary journals as well as in the anthology, Atlantic Currents: Connecting Cork and Lowell (Loom Press, 2020). Since February 2020, she has worked as the managing editor of Sensi New England magazine. Emilie’s second novel, The River Is Everywhere, will be published in February 2023 by Vine Leaves Press. In her free time, Emilie can often be found hiking in the White Mountains of New Hampshire along with her husband, Rob. Emilie’s Living Madly column appeared in Merrimack Valley Magazine from January 2017 until the publication’s closure in December 2021, and now is a regular feature on RichardHowe.com, appearing on the third Thursday of each month.