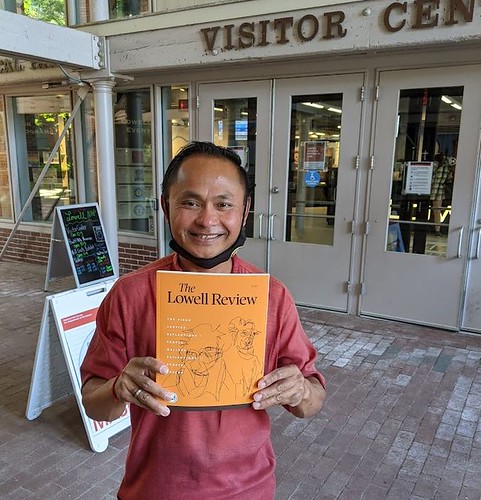 Editor’s Note: Tooch Van has been a friend for many years and has previously contributed items to this website. A poem he wrote appears in the 2021 edition of The Lowell Review. When I saw Tooch last summer to give him his copy of the Review, he was in the midst of his city council campaign. I asked him that when it was all over, regardless of the outcome, would he write something about his experience as a candidate for posting on the website. He recently shared this piece. -Richard Howe

A lawsuit filed in 2017, has inspired me to fight for the diversity, equality, and inclusion of Lowell’s elected bodies— Lowell City Council and Lowell School Committee.  And I must say this my heart is full of pride to be one of the plaintiffs in the Lawsuit. The Lawyers for Civic Rights (LCR) and Ropes and Gray (working on a pro bono basis) represented us (the plaintiffs) in this Lawsuit. This is one of the reasons I decided to run for Lowell City Council because I wanted to participate in greater civic engagement and to help in the leadership in the City of Lowell. I also wanted to give back to the City that has given me so much. I believe in the values of our democracy — the rule of law, human rights, democratic principles & freedom of speech.

Even though my campaign came short in winning the 2021 election, we got 42% of the votes cast.  That means 480 people in District # 5 South Lowell/Secret Heart Neighborhood voted for me. This is the honor of my life, as my first time running for public office.  As our campaign manager, Dr. Felicia Sullivan states; “Indeed, I am very proud of the campaign and for a first-time run, it was most excellent. It looks like Tooch garnered 42% of the votes which is not too shabby. He engaged a lot of young people and first-time voters. A whole lot of people who had never worked on a campaign got new experience and new connections. It is the best of what our democracy has to offer.”

My campaign team and I worked very hard and we ran a dynamic campaign: different generations and different languages: We registered new voters (young and old). One of the voters’ stories was amazing. He is 88 years old Cambodian, he was naturalized to be an American Citizen in the 1980s, but he has NEVER voted since then.  When I found out about this. I went to his home three times to ask him, to register and vote. It was in my third attempt, I succeeded to convince him to register to vote. And he finally voted in this 2021 election.

Our campaign team used a personalized approach and wrote a postcard (A Beautiful Day in a Community) to the voters asking them to vote for me.  We targeted young adults who were eligible to vote between the ages of 18 and 25 years old and asked them to vote for me.  We gave rides to voters and brought them to the poll station. We were delighted to do this so.

We made our campaign’s website and materials into four languages: English, Khmer, Spanish and Portuguese. We did outreach to those communities.  “I can only try to imagine what it would be like to leave my home under such dire circumstances, move to a new country, experience all of the challenges that immigrants face, and then decide to run a campaign (in a second language, no less).  You are incredible, Tooch.” Ms. Valerie Thomoforde, Parent and Volunteer of our campaign.

Last but not least, our campaign has given the opportunity to our volunteers to make connections and to gain community engagement experiences. Those experiences and their friendships will continue to last in their lifetimes.  Mr. Tara Hong served as a co-Campaign Manager alongside Ms. Seila Chuop. They both have continued being rising stars in the community.  Tara has served on a number of non-profit organization boards including the Mill City Grows and Lowell Litter Krewe. Tara Hong was a recipient of the Living the Dream 2021 Award presented by Middlesex Community College. He has decided to run for the State Representative in 18 Middlesex District. Seila Chuop has served on the Cambodian Mutual Assistance Association (CMAA)’s Board. She works full-time with the Volunteer Lawyers Project (VLP). Their community experiences will be promising and highly demanding in the years to come. I will continue us working with them and other young volunteers. I want to encourage them to continue getting in involved and engaged.

On November 2, 2021 election night, my campaign team, my family, and I were very disappointed with the election’s result which we came short.  I officially conceded to my opponent Mrs. Kim Scott. That night, I talked to the Lowell Sun’s reporter: Kaitlin Mulkerin as well. I told her many things about our campaign, but one of them was about my campaign team who I was most proud of.  The team helped me to run a very dynamic campaign in this 2021 election.  “Van prides his campaign on including multi-generational people and multi-languages,” Mulkerin stated.

Here is the letter I wrote to Ms. Scott:

I congratulate Kim Scott who got elected to represent District 5 South Lowell. The voters in District 5 have selected a woman to represent them on the Lowell City Council which is a step forward for diversity. My campaign was all about inclusion and diversity in the elected bodies; our campaign has energized new voters and volunteers in multiple generations and multiple languages, especially the young generation. I will continue to work with the young generation to encourage them to get involved in civic engagement in our city. Even though the result of this election did not come out the way that I hoped for, I shall continue serving and engaging in the city of Lowell that I love and care for deeply.

I’d like to thank my campaign team, my family, and all the volunteers; we together ran an incredible and dynamic campaign. I can’t ask for more. I am very proud that I am one of the plaintiffs that demanded the city change its voting system to be more inclusive of all its people and neighborhoods. As a result, we have just elected a council and school committee that look a lot more like Lowell. Also, I’d like to send thanks to the 480 people who voted for me in this election and those who supported and contributed to my campaign. I greatly appreciate it. Once again, I will still continue being engaged and involved with the city that I love and care about deeply.