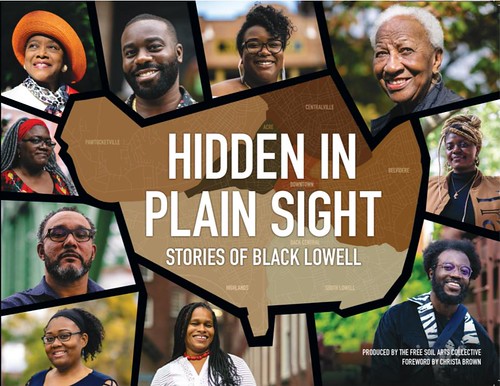 Hidden in Plain Sight: Stories of Black Lowell is a collection of interviews of 27 Black people who have lived or worked in Lowell over the past few decades. Produced by Free Soil Arts Collective, the book is superbly designed and is illustrated with vibrant photos of the speakers. The interviews were conducted by Christa Brown of Free Soil and Masada Jones of The Kindred Project. 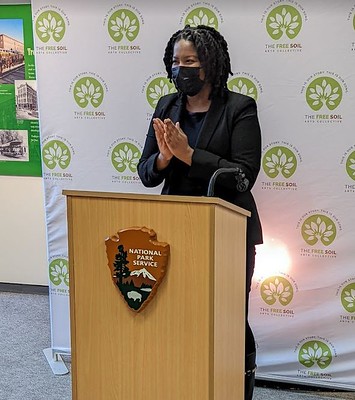 Christa Brown at the opening of the Hidden in Plain Sight exhibit at Lowell National Historical Park.

In her forward to the book, Christa observes that the stories of Black people in Lowell have mostly been omitted from our history books and school curriculums and that this book is an attempt to remedy that. It succeeds in that attempt and does much more.

Black people have been in Lowell for longer than there has been a Lowell. For example, Barzillai Lew, who owned a home in Pawtucketville and is buried there (in Clay Pit Cemetery), fought in the American Revolution, and spent the rest of his life here. Yet little is known about him and I know of no monument erected in his honor.

There is much more about the experience of Black people in Lowell that deserves closer attention not the least of which is the active role played by that community in the pre-Civil War fight against slavery. But the words I just wrote – “it deserves telling” – illustrates the problem highlighted by this book. I should have been able to write, “it has already been told in great detail” but that’s not the case.

One of the great successes of Hidden in Plain Sight is that the recited interviews subtly touch upon the structural forces that have kept those stories from being equitably told. An example can be found in the comments of Jessica C. Price who came to Lowell at age 5 and said about her experience in the Lowell schools:

I also want to see more Black leadership within the community, particularly in the school system. Growing up, I would have loved having more Black guidance counselors to talk to that would help me navigate my future. We didn’t have many people that look like us in school, so it would’ve been nice to have that. Even the Black Unity Club was run by a white man. I went to the club a handful of times and I just felt that the knowledge that he was teaching us was very basic. It would have ben great for us to learn the things that we know now. We could’ve benefited from seeing more Black faces, people just like us that we can relate to and unwind and let them know, ‘Hey, I’m having a rough day because . . .’ and they could relate. I felt like they did the very bare minimum for us to be seen. I think it was like, ‘Well, we’ll give them a space, let them hang out. They’ll be fine.’ I’ve talked to a few other people in the area and they felt this very same way.

Another success of the book is the way it synthesizes the seemingly diverse subgroups that makeup the Black community of Lowell. Some Black residents have centuries-old roots in the United States, others come from the Caribbean and Central America, and still others were born in Africa and came here for higher education and stayed. An outsider naturally wonders how the different groups all fit together.

In addressing this issue, the book uses the “show don’t tell” approach by letting the individual stories create a collage of different experiences that create a beautiful picture of what the late Yale history professor Robert Thompson called the “Black Atlantic” which is a term Thompson used to show the close connections seen in the Black cultures of Africa and the Americas.

To illustrate how that works in the book, here’s a list of the interviewees and their backgrounds:

A brief though important section of the book explores the Black experience with Urban Renewal in Lowell. That federally funded program demolished several existing neighborhoods in the city without due regard to the people who already lived there. This (mostly) 1950s/1960s phenomenon is very much neglected in the study of Lowell’s history and the attention that has been paid has focused on the experience of the Franco Americans in Little Canada and the Greek experience with the North Common Village. However, a neighborhood that had a large cluster of Black families, Hale Howard, was also razed in Urban Renewal, scattering those families across the city and fragmenting the close community that existed there. Although not strictly part of Urban Renewal, more recent policy changes at the Lowell Housing Authority’s Bishop Markham facility and the demolition of its Julian Steele development had an identical effect on Black families.

Hidden in Plain Sight may be purchased on the Greater Lowell Community Foundation website.

There is also a companion exhibit on display at the Lowell National Historical Park visitor center at 246 Market Street in Lowell. (See photos of the exhibit below). 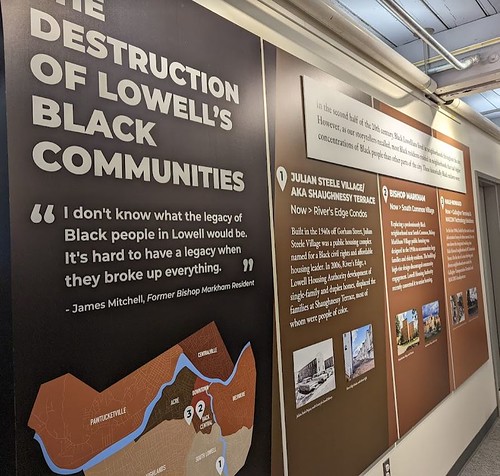 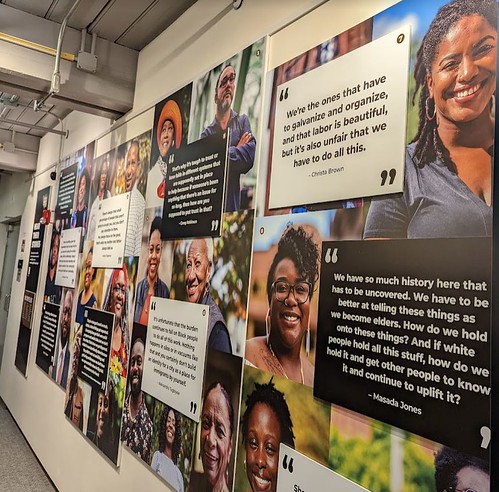 2 Responses to Review of Hidden in Plain Sight