Joe Blair grew up in Westford, Mass., and now lives in Iowa. He is the author of By the Iowa Sea: A Memoir, a story about a family in a small town which Oprah’s magazine “O” described this way: “so raw and true you’ll gasp.” On his Facebook page, Joe posts short prose pieces a few times a week. This recent one below struck us as a scene that our readers would want to see. 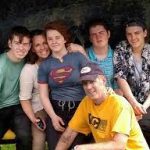 That’s Joe in the yellow shirt.

We had a good, solid marriage for the month of Game of Thrones. Likewise for the month of Downton Abbey. And who could forget the nights — The Night Manager and The Night Of? Those were heady times. And we loved our vacation in Paris. Remember the romantic moments we had on The Bureau? Of course, we had to come back down after it ended. It wasn’t an easy transition. We had our rough patches. We were charming and a little silly for one week of Ted Lasso, and then things became stale and not charming at all. Likewise with Cobra Kai. We lost the magic along the way somewhere. But at least we had something at the start. We can say that, can’t we? We had something at the start. Better than never having anything at all. Like with This Is Us or Squid Game.

But we’ve been married for thirty years. Which means something. Doesn’t it? We have staying power. We come back. And we’ve been going really strong for two weeks now with Succession. It felt good to be heading in the same direction again. Loving each other so well again. I was happy because Deb was happy. Nine o’clock would roll around, and she’d say those three words I can’t live without. “Watch our show?” And we’d sit together on the couch and she’d do that quirky little thing she always does, which is to put her feet up on the ottoman and wait for me find the Roku remote and then turn on the TV and go to home and then to Amazon Prime and then to Succession and then wait for me to push play and then skip intro. And then we’d hold hands and prepare ourselves to enter the exciting new world we’d gone back and forth on for a minute or two.

Until last night, when Shiv Roy once again cuckolded Tom, who is a wheedling idiot anyway, and Connor Roy released his presidential campaign video, which put his father, Logan Roy, in a difficult political position, and Kendall Roy continued to snort coke and be a douche, and Roman Roy leaked secret plans for a corporate takeover of PGN to PGN.

“I didn’t want to be a downer. I thought it made you happy, so I went along with it. I mean, I didn’t hate it.”

No one’s marriage is solid. We’re all an episode away from separation. No one has the capacity to know anyone else. Each of us is floating in the vacuum of space, each in our own suit.

3 Responses to ‘Watch Our Show?’: By Joe Blair