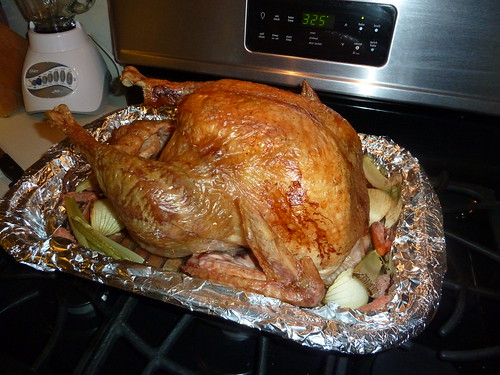 Food is a big part of Thanksgiving. For several weeks we’ve seen articles and features about how to cook a turkey or how to make new or traditional side dishes. With the division of labor in our house making me the primary cook, I pay attention to these things.

Thanksgiving Dinner for me has lately consisted of roast turkey, mashed potatoes, cornbread stuffing, green beans, carrots, and cranberry sauce. Years ago, we would host 15 or more people so my approach skewed towards keeping it simple, properly cooked, and served hot and without fuss. Sophisticated recipes made things too complicated. That “keep it simple” approach persists, although the crowded dinner tables do not, especially in this time of pandemic.

I’ve tried fresh-killed local turkeys but found that a frozen Butterball cooked properly yields juicy meat that tastes great. The stuffing is Pepperidge Farm cooked in a casserole dish, not inside the turkey. The cranberry sauce is Ocean Spray jellied. I used to mash that up in a dish to create a whiff of doubt that it had not been purchased in a 14 ounce can. Now, I keep it intact so that the parallel ridges caused by the indents of the can resemble a work of modern art.

My final culinary undertaking on Thanksgiving is to make a batch of Mike Dukakis Turkey Carcass Soup. The recipe, per our former governor, is to place the carcass of the roasted and mostly eaten turkey into a big pot. Throw in a few carrots, some celery, and an onion. Cover it with water and let it simmer for at least three hours. About a half hour before it’s done, add some frozen peas and a cup of uncooked white rice. The last step is to use some tongs to pick out the bones and anything else inedible, and you have a large quantity of tasty, filling turkey soup.

Because it’s such a family-centric holiday, Thanksgiving makes me think of gatherings from the past. My maternal grandmother was an excellent cook (a skill she bequeathed to my mom) and often hosted us for holiday meals. During my grammar school years, we lived on the first floor of the two-family house owned by my grandparents so I was able to wander through her kitchen in the hours and days before the big meal was served.

My memory is that everything was tasty, but two dishes stand out above all else. First was the stuffing. Its starting point was the neck and other organs that we still find in the twin cavities of an uncooked bird. Today, I toss them directly in the trash, thankful that I’ve spared myself the embarrassment of cooking them inside the turkey. My grandmother would plunge these parts into an antique-looking meat grinder and use the pink coils that emerged as the base of a delicious stuffing. If celery and onions were added, they were diced so finely that all but their flavor disappeared from the finished dish. I believe the base was white bread, but it may have been crackers. There must have been seasonings – how else would it have tasted so good? – but I don’t know which ones. And of course, it was cooked inside the turkey, a turkey that was regularly basted and turned over at least once during cooking. What emerged from the inside of the cooked turkey was steamy and moist and tasted superb.

The second item that stays in my mind was gravy. This did not come from a can or a packet. It was prepared right in the roasting pan over one of the stove top burners. As a child I was fascinated by this repurposing of the roasting pan. One minute it sat inside the oven cradling a turkey, a moment later it was on the stove top burner with my grandmother sprinkling flour into it and using a fork to scrape and whisk that into the residue of the turkey drippings while scraping and dislodging the browned bits affixed to the bottom of the pan. More liquid was added, and over the flame of the gas burner, the potion would magically thicken into a silky coffee with cream-colored gravy that added enormous flavor to turkey and mashed potatoes.

Thinking nostalgically about Thanksgiving feasts creates a domino effect of memories of other foods I enjoyed long ago. My idea of fine dining at age 8 was a Swanson frozen TV dinner. For those too young to remember, a TV dinner came in a compartmented aluminum tray that was frozen solid. My memory is that there was a large compartment for the main course, two smaller ones for side dishes, and another for dessert. Fried chicken and roast turkey were my favorites.

Wax paper bags were not edible, but they were my primary means of transporting lunches to school. I can only assume that clear plastic Ziploc storage bags were not yet a thing. Instead, your peanut butter and jelly sandwich was slid into this envelope of wax paper that was then rolled down from the top to seal in the food. A quick Google search left me surprised that wax paper bags are still sold although I haven’t seen one in decades.

Tang was a big deal although I think it first reached consumers in the late 1950s. However, as NASA reached for the moon in the mid-1960s, we were told that astronauts drank Tang in outer space. I never really liked the taste of Tang but drank it nonetheless to create a connection to the astronaut-heroes of the day.

Real orange juice came from frozen concentrate that was packed in a cardboard tube with metal ends. Take the tube out of the freezer, let it thaw a bit so the contents would slide out into a pitcher, then fill the pitcher with water and let the juice concentrate dissolve.

Keeping with beverages, soda – most often Coca-Cola – came in small glass bottles which required a bottle opener to uncover. After the Red Sox won the American League pennant in 1967, local Coke bottlers – there was one on Industrial Ave in Lowell – affixed the faces of Red Sox players to the inside of bottle caps and provided a cardboard template to which you could affix your bottle caps until you collected the whole team. Many cases of Coke were sold to fill out the roster.

At school, milk came in half-pint glass bottles although it soon switched to cardboard cartons. A bonus was that those glass bottles were filled each day at Lavoie’s Dairy at the corner of Wilder and Shaw streets. Because we lived just two houses away on Wilder Street, in the summer I used to stare in the back window of the bottling room until the worker tending the line slipped a just-filled half-pint of chocolate milk to me.

Not all food was prepared and consumed at home. My favorite restaurant may have been the Green Ridge Turkey Farm which was in Nashua where the Barnes and Noble bookstore now sits. Another favorite was the Hot Shoppe in the newly opened Burlington Mall. An upscale cafeteria, the Hot Shoppe served “steamship round of beef” on Sunday at noon. That was my favorite. A bonus was that you could have a Coke with your meal.

I’ll close with a list of foods that became staples of my childhood with the years they were first sold:

One Response to Food Nostalgia