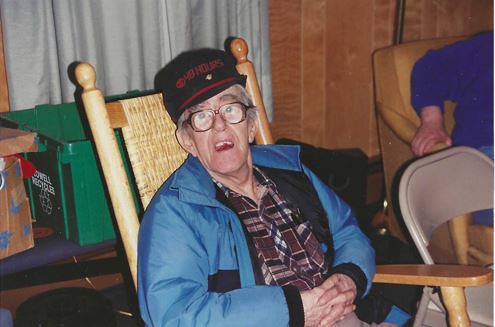 Marvelous Marvin Hagler and the Godfather

My Uncle Arthur was more than an Uncle. He was my Godfather, which is like being picked to become Vice-President. You get an important sounding title but you never have to do anything unless the main guy dies or fails to do the job. My father didn’t die, but he split in 1963 when I was 11 years old, which meant my Uncle Arthur was supposed to step in as the “father figure.”.

Most guys who get picked as Godfather treat it like being the best man at somebody’s wedding. They show up for that one event and move on with their lives. Not Uncle Arthur though, when he accepted the part, he took his vow seriously.

I missed my father and it hurt when he left, but I lucked out because I would have picked Uncle Arthur over any other father I knew. Some of my friends had horrible fathers, others had okay fathers and very few had great fathers. None of them had one better than my Godfather, Uncle Arthur.

He wasn’t great like an old spit and polished 50’s sit-com dad who reeked of middle-class respectability. He was great because he never pretended to be my father and remained the kind and loving Uncle who always made me feel special for just being me.

Uncle Arthur was a quiet guy who usually didn’t have a lot to say. But instead of being awkward or uncomfortable, his silent ways had a calming influence. We’d hang out together, watch a little TV, then take a walk to the local variety store where he would insist on buying me a snack and a comic book.

He never made much money grinding away at his factory job, but he was a really generous guy. He loved to treat me to a couple of outings each year to go see the Red Sox. We’d board the train to North Station in Boston, hop the subway to Kenmore Square, walk over to the sacred grounds of Fenway Park and watch the Sox find an agonizing new way to lose a game. We’d fill up on hot dogs, junk food and Coke, hit the souvenir shops at the end of the game and take the train home grumbling about how the Sox blew it again.

Although he enjoyed baseball, his favorite sport was boxing. I think he liked it the most because he had an eye operation when he was young that left him with extremely poor vision. His eyeglasses were so thick, when I tried them on, it looked like I was trying to see through water. It was much easier for somebody with poor vision to watch the action of boxing on a small black and white TV than other sports, so Uncle Arthur used to tune in religiously on Friday nights to watch Don Dunphy broadcast the “Fight of the Week,” and was saddened when it was cancelled in late 1964. He turned me on to his love of boxing and I have fond memories of watching those Friday night fights with Uncle Arthur and hearing his tales about all the old boxing greats he saw in his day and his reverence for Joe Louis. The only argument I think I ever had with Uncle Arthur was when I told him I thought Muhammad Ali was the greatest. He always insisted Joe Louis would’ve defeated Ali. But to his credit, he grudgingly admitted that even Louis would’ve had a hard time beating Ali after he saw what Muhammad did to Cleveland Williams.

As I grew into my teen years, Uncle Arthur morphed from being the grown-up guy I could count on into my best friend. My quiet companion who I needed to be around to make any important experience feel complete. I knew I came of age to him when he bought me tickets to see the Golden Gloves tournament. This was not bringing your kid to a ball game.

When you entered the Lowell Auditorium to see the Golden Gloves in the late 60’s, it was like entering at least the fifth or sixth ring of Dante’s Inferno. Loud, cursing men pushing and shoving through the corridors, filthy restrooms with drunken guys not even trying to aim at the urinals and cigarette smoke thicker than a foggy swamp scene from an old Universal Horror movie. The place was packed, over two thousand strong, and the atmosphere was dangerous and exhilaratingly electric, where the drama of each bout played out like a passion play in the dramatic spotlight. Uncle Arthur and I were never happier.

I missed those nights with Uncle Arthur when I joined the Army so I bought us season tickets for the Golden Gloves my first year back and every year after until he finally became too old and frail to attend. We had the same two seats in the third row at ringside every year. Since they were season tickets, we knew everyone in the packed seats surrounding us. However, every year there were always two vacant seats near the aisle on our left. That all changed one night in the late 70’s when a buzz started up as middleweight contender Marvin Hagler ventured through the crowd. He was looking for a place to sit when he saw the two empty seats and asked if he could join us. He said his brother Robbie Sims was going to be fighting next and he wanted to cheer him on. We shook hands and became the envy of everyone by inviting him to join us. Marvin needed no introduction, so after exchanging pleasantries I said, “And this is my Godfather, Uncle Arthur,” the way I always introduced him formally to somebody.

Every boxing fan knows Marvin purposely projected himself as an intimidating warrior who scowled at the world. But the man who joined us was straight out of Mr. Rogers Neighborhood. We talked about his brother and had a great time rooting as we high-fived him on to victory. Then as Marvin was saying goodbye, I pointed to my Uncle Arthur and winked, “Oh, this guy doesn’t think you’re so tough,” and my Uncle Arthur, who didn’t hear what I said, gave him a little smile and wave and Marvin laughed with exuberant joy.

Marvin returned the next year to see his brother fight again, the same two seats were empty and we greeted like old friends. Then he smiled and winked at Uncle Arthur and cheerfully said, “It’s the Godfather! How are you doing, my man!”

Shortly after he became Champion of the World.

Like every other boxing fan, I was shocked and saddened when I heard the Champ had passed away last March. However, when others remember Marvin they usually associate him with Thomas Hearns or Sugar Ray Leonard. But for me, my lasting memory will always be of Marvelous Marvin Hagler and the Godfather.

3 Responses to Marvelous Marvin Hagler and the Godfather