Featured in today’s Irish Times is a collection of essays by prize-winning poet, Peter Sirr: “Intimate City: Dublin Essays.” This week, Trasna is pleased to present ‘A morning walk,’ one of the essays from this brilliant collection.  Sirr’s essays explore Dublin’s past and present; travel its narrow lanes; meditate on its earliest map; and contemplate the impact a place can have on those who live there.

In one of his essays ‘Shirts for Books,’ Sirr discusses the loss of a landmark bookshop: “The death of a bookshop always hits hard. There are never that many of them to begin with and they are rarely replaced, so that one more opportunity to idle among familiar shelves disappears.” The essay, however, isn’t just about the often regrettable changing landscape of a place, but rather how those changes change us, the readers: “these are where the unsought, life-changing books are stored, the books you would never have thought to search out.” Sirr’s “Intimate City” is a collection worthy of searching out, of reading, and of storing on your own bookshelf to visit again and again. 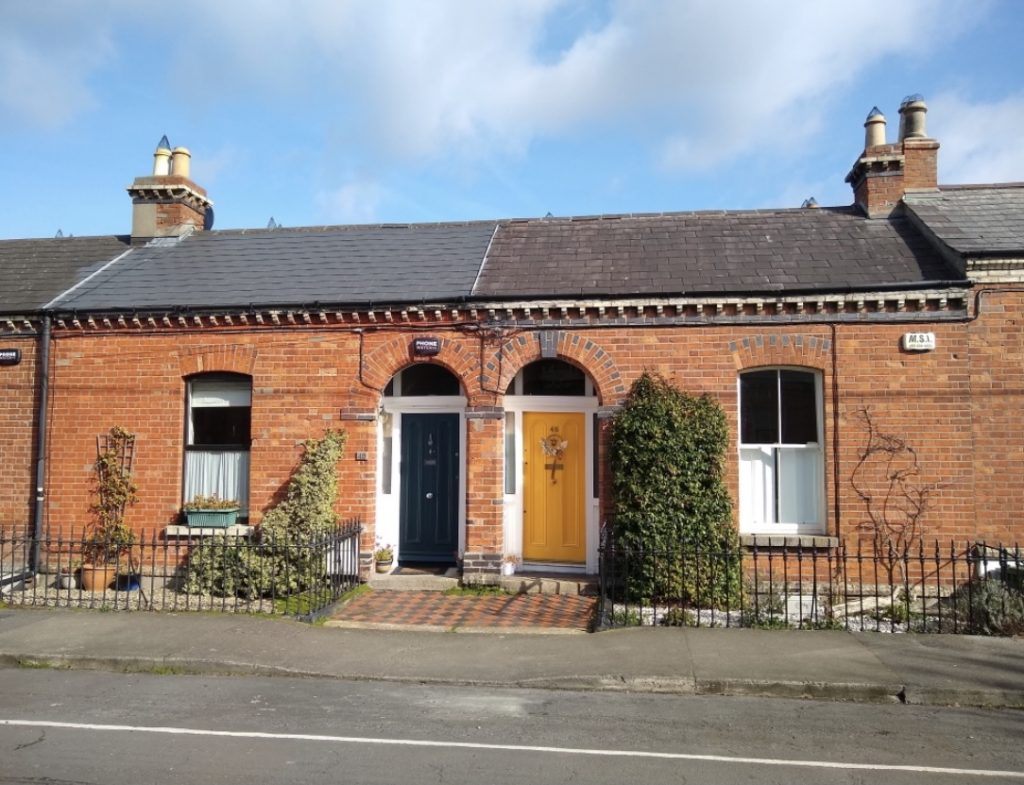 Because it will end soon I’m possessed by a sudden urge to memorialise it, this ritual the morning offers us, or rather the series of rituals through which we enter the day. After breakfast we leave the house, my five-year-old daughter, the dog and myself. The leaving is itself a complex ritual. The dog waits at the top of the stairs, anxious and excited. Will it happen, or will they forget me? Will I have to content myself with looking out the living room window and hurling myself against the glass if any other creature appears? His tail thumps against the stair carpet as he watches us putting our coats on. I go back into the living room to get the lead. I give it a mild shake, a tiny wrist-flick. It’s enough; the dog comes bounding down the stairs in a fever of excitement. He jumps up on his hind legs, and butts the door, almost as if the issue were still in doubt and we might yet fail him. I’m tempted to clip the lead quickly onto his collar and get him out before he explodes, but that is my daughter’s task, and I know better than to disturb any part of her ritual. It takes her a while to control the dog enough to get the lead on, but eventually it’s accomplished, and we can leave. She is the gate opener and the gate closer.

Finally, we’re on the pavement, and the journey can begin. We set off, the three of us, three different but connected journeys. I hold my daughter’s hand as she skips down the street; in my other hand I hold the lead firmly as the dog wheels and lunges, imposing himself, warning off any creature foolish enough to break the circle of power he throws around himself. We walk up to the great noisy thoroughfare of Clanbrassil Street, packed with slow-moving cars, motorcycles, bikes. We stand on the edge of the pavement, waiting for a gap to get us across to the central island. Even here, the dog is foolish enough to race after a cat or another dog. I shorten the lead and hold tight. Eventually we cross the swarming river of traffic and escape into St Kevin’s Parade by the side of Bu-Ali. This is the entrance to another world, an island of redbricked quiet patrolled by cats. Freya greets the two ginger cats generally to be found near the side entrance of the takeaway or outside the door of the cottage alongside it. The owner leaves out food for the strays. The ginger cats are fearless and merely stare at the dog, but the smaller, darker cats dive under cars and his dignity is appeased.

We round the corner and now we have the long strip of Lombard Street West with its cherry blossom trees and orderly Victorian houses. Like most of the small streets around here, it was built in the 1870s in small lots by different developers, which accounts for the variations in the houses. Most are single-storey but there is one block of two-storey houses. Many of the houses have bay windows, but some present a straight line to the street. The doorcases are similar but again there’s much variation, as there is in the different styles of fanlights above the doors. There’s coherence, but it’s a slightly higgledy piggledy coherence bound together by small differences.

Right now, it’s cherry blossom season and the pavement is littered with the pink confetti. Although we are in the heart of the city, there is hardly any traffic here and we rarely encounter anyone. My daughter skips along happily and we make up stories about the streets we walk through or stop to inspect signs on letter boxes or cats on windowsills. Lombard Street is quite long and my natural inclination when faced with any long stretch of road is to veer off it down a side-street; to walk, for me, is to zigzag rather than keep a straight course. As we approach the second corner I have an inclination to veer into Desmond Street and take the next right into McMahon Street, the next street down from Lombard Street. It’s a tiny, toy-like street and because of the slope of the road when you turn into it you almost feel as though your head will touch the roofs of these cottages with their pretty bay windows and scaled down brightly coloured doors. They stretch back and are perfectly spacious inside but the front they present to the street is of a decorous modesty. This used to be our daily route until one day I didn’t take the turn and continued down Lombard Street, and for some reason my daughter was so taken with the altered route that it locked fast in her mind and became an absolute part of the journey. I feel her hand tugging me sharply back from my attempted variation and give up the attempt. I can always enjoy it later, I think.

There are certain pre-ordained stops along the route: in one garden an old yellow wellington boot has been converted into a plant pot and each morning Freya pauses to inspect both boot and the creeper that seems happily housed in it. Then there is the poodle in Arnott Street who waits for us on a table in the basement level kitchen and barks furiously up at us as we pass. Get off my path! How dare you cross my territory! Get away now or I’ll … His taut poodle body quivers with rage. Even if it’s a precise replication of his own antics at our front window, our dog is unimpressed, and ignores him.

We cross the road and a little further on they are still working on a block of new houses on the corner. One of the houses has a mirror set in the concrete and Freya pauses there to examine herself. Once she’s satisfied, we can advance. The mirror house marks the end of the little district that began with the cats on St Kevin’s Parade. Its southern border is the South Circular Road and its northern limit is Long Lane. The long stretch of Heytesbury Street is the eastern boundary. Beyond that the brick colour lightens and the house type moves up a scale in grandeur. We cross over busy Heytesbury Street and go around the corner into Pleasants Street. We’re now in the neighbourhood of Camden Street, and the little streets we have just left have no bearing here, and no-one who lives here would be drawn to them; they’re much more likely to feel the magnetic pull eastward towards the axis of Camden, Wexford, Aungier and George’s Streets with their coffee shops, restaurants, groceries, butchers, hardware and electrical goods stores, and on into town.

We are nearly at the end of the morning ritual but neither of us is in any hurry to bring it to its conclusion. The Montessori is in a basement and I tie the dog to the railing before we descend. My daughter sits on a step or on the edge of the raised garden and waits for me to ring the bell. The world will begin when the door opens and she walks in, and this moment of waiting is a small effort by both of us to prolong the ritual of the journey through the streets. The journey is too short, the ritual is over in only fifteen minutes, and I think we both realise that the ceremonial walk from house to school is a magical space, a sort of transition between worlds that is itself a wholly absorbing world.

There will be other trips out during the day, including a repetition of this route when I collect her, but somehow that’s different, those excursions are stitched into the day; the morning walk occupies a separate space, almost a private city: our own interaction with ourselves, but also an interaction with space, time, with bricks and light and urban greenery. Strange how effortlessly these details, and our passage through them, print themselves on our receptors; our bodies as well our minds become used to them, and used to the trace of the ritual journey. Walk somewhere a few times and the body’s software will absorb the route and then reproduce it automatically. Sometimes if I leave the house without thinking about where I’m going, I’ll find my legs moving resolutely for the habitual route; or I’ll find myself halfway up Lombard Street before I realise I’m supposed to be walking in the opposite direction. I have to make a conscious effort to divert my body from its programmed navigation. This particular software configuration will lodge in the permanent map-room of the brain, so that even if I were to come back here twenty years from now I wouldn’t have to think about where I was going. But the ritual will have vanished; it will be a route rather than a ceremony, it won’t be now, a morning in May, the three us walking together into our day.

I know that my current morning route has only a couple of more months in it, before my daughter starts school, and that’s partly why I have this urge to memorialise it. I’ll walk this way again, but it will be different, it won’t be a fixed trajectory hard-wired to the brain; it won’t be now. 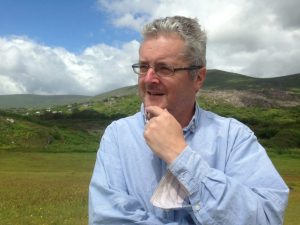 Peter Sirr has published ten poetry collections, of which the most recent are The Gravity Wave (2019), a Poetry Book Society recommendation and winner of the Farmgate Café National Poetry Award, and Sway (2016), versions of poems from the troubadour tradition. The Rooms (2014) was shortlisted for the Irish Times Poetry Now Award and the Pigott Poetry Prize. The Thing Is (2009), was awarded the Michael Hartnett Prize in 2011. His novel for children, Black Wreath, was published in 2014. His radio dramas are broadcast on RTE, the national broadcaster. His most recent, Krakow, was shortlisted for the New York Radio Awards and Irish Music Rights Organisation Radio Drama Awards. He teaches literary translation in the Centre for Literary and Cultural Translation, Trinity College and is a member of Aosdána, the Irish Academy of Artists. With his wife, the poet Enda Wyley he co-hosts the podcast Books for Breakfast ([https://booksforbreakfast.buzzsprout.com])

‘Intimate City: Dublin Essays’ and other books by Peter Sirr are available from Gallery Press: https://www.gallerypress.com/authors/o-to-z/peter-sirr/

2 Responses to ‘A Morning Walk’ from “Intimate City: Dublin Essays” by Peter Sirr