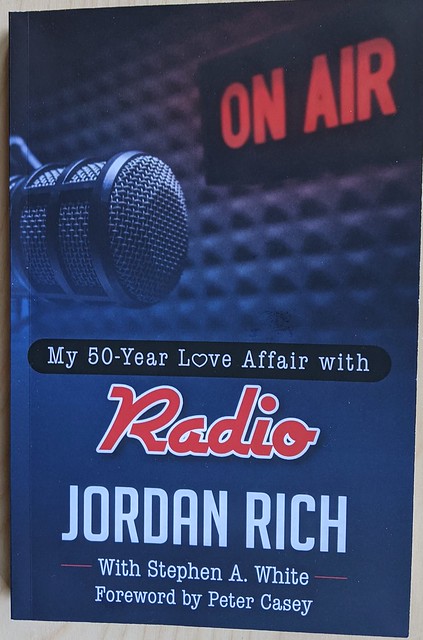 “On Air: My 50-Year Love Affair with Radio” by Jordan Rich

Between podcasts on my phone, music on my Amazon Echo, and a lingering satellite radio subscription that came with my car, I hardly ever listen to “the radio” anymore. By that, I mean through-the-air AM or FM signals originating somewhere nearby. It wasn’t always that way. My fondest memories of childhood include falling asleep to Red Sox broadcasts from Fenway and points south and west. Because my dad was elected to the Lowell City Council when I was just seven years old, morning talk shows on Lowell-based WCAP and WLLH were part of the household soundtrack. Driving home from night classes at Suffolk Law in the mid-1980s, Larry Glick was my constant and welcomed companion. As the Massachusetts Miracle imploded in the late 1980s there was Jerry Williams ranting about Mike Dukakis and “fees, fines and taxes.”

And then there was Paul Sullivan who died so tragically young in 2007 at age 50. Paul anchored the WLLH morning show for many years bringing hilarity and sharp political commentary to the local airwaves. Then he moved on to WBZ for the evening shift five days per week. Paul invited me on WLLH many times and once on WBZ to pose trivia questions to his audience.

My memory is that whether at WLLH or WBZ, Paul seemed constantly to be saying the name Jordan Rich, perhaps because Jordan’s show followed Paul’s at both stations. I’m not sure I ever met Jordan; but thanks to Paul’s mentions and thanks to many times I listened to Jordan myself, I feel like I’ve known him for a long time.

That feeling was substantially enhanced when I read “On Air: My 50-Year Love Affair with Radio”, Jordan’s recently published memoir. If, like me, radio was (and perhaps still is) a big part of your life, this book will delight you. Jordan delivers sketches of so many familiar on-air personalities: the afore-mentioned Jerry Williams and Larry Glick plus Paul Benzaquin, Norm Nathan, Gene Burns, David Brudnoy, Jess Cain and others. The book also shares behind-the-scenes stories from WLLH, WSSH, WRKO and WBZ, stations at which Jordan had on-air duties through his career. Because we only hear radio and can’t see it, there is a mysteriousness about what’s happening around that voice that’s reaching you through space. This book sheds light on things like how the music that is played is selected, how calls are screened, all the work that goes into preparing for a program, the crazy hours people in radio work, and the lack of job security they have.

Besides this welcome trip down radio memory lane, two things about On Air really stood out for me. First, Jordan tells how the magic of radio touched him at a very young age. At his “get whatever you want” moment at the S&H Green Stamp store, he chose a reel-to-reel tape recorder so he could interview friends and family. He chose a small college near his home – Curry College in Milton, Mass. – because Curry had its own radio station but unlike higher profile programs like BU and Emerson, Curry let freshmen on the air. This part of the book was a reminder of how important it is to expose young people to many things and when they show an interest, encourage it. You never know what will be a passing fancy and what will be a lifelong passion.

The second message from On Air was being a nice person pays off. Today, talk radio is a platform for extremism with harsh rhetoric the norm. Early in his career, Jordan chose a different approach: he would be nice to people. The book contains countless examples of how that approach drew out the humanity in his listeners and opened the door for more and greater opportunities for him, both professionally and personally.

Read more about Jordan Rich on his website and learn how to buy his new book here.

2 Responses to Review of “On Air: My 50-Year Love Affair with Radio” by Jordan Rich