Throughout the month of March, Trasna is featuring Irish language writers. This week, we are pleased to share the work of Doireann Ní Ghríofa. Included in this post is a video of  her poem: “Under a Fridge Magnet is a Photo of Grandmother as a Schoolgirl.” The poem is read in Irish by the poet, and includes the English translation.

Under a Fridge Magnet is a Photo of Grandmother as a Schoolgirl,

and at the back of the freezer

are chops, a rack, and legs of lamb

a spark in ice, grown still.

that a body will remain in motion

at the same velocity, unless acted on

by an external force.

that skip-jigged over a hill

where the red-yellow light 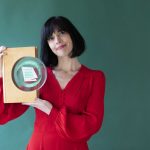 Doireann Ní Ghríofa is a poet and essayist. ‘A Ghost in the Throat’ was named Irish Book of the Year 2020, and described as “glowing” (Anne Enright), “captivatingly original”​​ (The Guardian), “sumptuous” (The Sunday Times), and a “masterpiece” (Sunday Business Post). Doireann is also author of six critically-acclaimed books of poetry, each a deepening exploration of birth, death, desire, and domesticity. Awards for her writing include a Lannan Literary Fellowship (USA), the Ostana Prize (Italy), a Seamus Heaney Fellowship (Queen’s University), and the Rooney Prize for Irish Literature, among others.