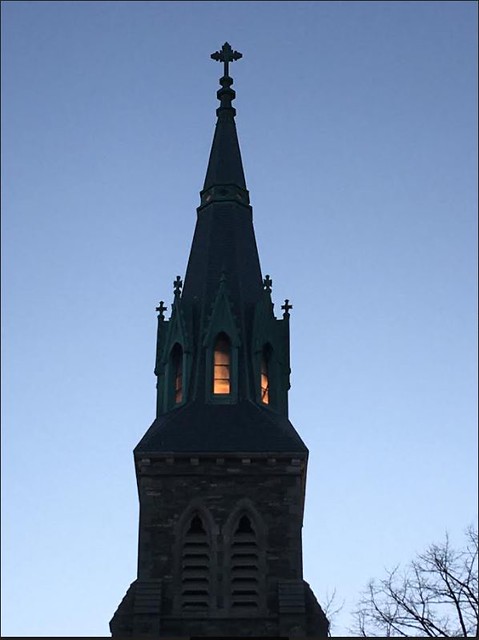 One day last week, I hoofed it up to UML Lydon Library to get a couple of Inter-Library Loan books for an article I’m working on about how Kerouac actually met Neal Cassady at Columbia in December 1946. The basic facts are generally well-known, but the amazing chain of specific events leading up to that fateful meeting have not yet been documented, as far as I know. To think that Kerouac may never have become the celebrated literary and cultural icon he became, if not for that chance meeting arranged by their common friend Hal Chase (also from Denver like Neal), which ultimately established his reputation with the publication of Road a decade later.

So I left my apartment on Middle Street at 4:40 pm and practically had to run up Merrimack Street to get to Lydon before it closed at 5 pm (because of Covid, it’s only open for picking up books on Mondays and Thursdays and I had already missed my chance the previous Thursday). But I managed to arrive exactly at 4:55 pm and picked up  Edie Parker-Kerouac’s memoir You’ll Be Okay: My Life with Jack Kerouac (published 2007 by City Lights Books), which spells out the details of how Kerouac and Edie rented various apartments (three in all around the Columbia campus) with Joan Vollmer (with whom William Burroughs had a son, died of heroin overdose), which were the gathering places of Kerouac et al, and where, Kerouac met Hal Chase in 1945 and first learned about Neal. So vital info there for my article.

I stashed the book and one more by Brenda Knight (Women of the Beat Generation) in my backpack and walked (a little exhausted after my run) back over the new Howe Bridge (where last week, by the way, I saw a woman stopped at the last moment from jumping by the LPD) and up Fletcher Street to Market Basket at the corner of Broadway, since I needed more chocolate soy milk and mouth wash. After living in upscale Acton before moving last year to Lowell and shopping at the almost-all-white MB in Littleton, where first world privilege is always on full display, even though no one is aware of it because it’s all they know, I look forward to my trips to the “ghetto Market Basket,” as my students call it, where I’m one of the few white people in the store. It’s a good, much needed and appreciated weekly learning experience for sure.

Leaving Market Basket with my backpack full, it was about 5:30 pm, but still plenty of light, in fact the sun was just going down. I cut over to Saint Patrick’s Church across from the Holy Trinity, one of my favorite Lowell juxtapositions. As I was crossing the bridge over the Western Canal with Saint Patrick’s and the setting sun behind me, I turned around for no particular reason and happened to catch what turned out to be a beautiful, almost breathtaking sight: the sun was turning the clouds red like long brushstrokes and hitting the top of Saint Patrick’s tall, Gothic steeple at exactly the right angle so the light hit the backs of the old dirty windows and made them glow candle-light yellow like a glowering, medieval lantern-face. Wow! A first for me. Just happened to be in the right place at the right time.