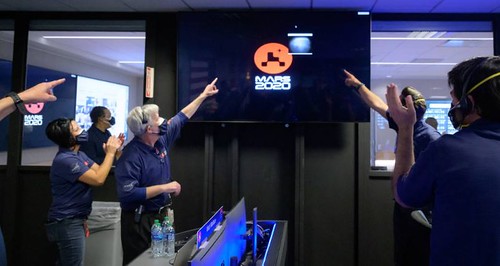 February 18, 2021 – (above photo from NASA website) – Members of the Perseverance Mars Rover team watch in mission control at NASA’s Jet Propulsion Laboratory as the first images arrive moments after the spacecraft successfully touched down on Mars, Thursday, Feb. 18, 2021. A key objective for Perseverance’s mission on Mars is astrobiology, including the search for signs of ancient microbial life. The rover will characterize the planet’s geology and past climate, pave the way for human exploration of the Red Planet, and be the first mission to collect and cache Martian rock and regolith.

Growing up in the 1960s, space flight seemed a part of daily life. The pace of the missions was steady, the names Mercury, Gemini, and Apollo were well-known, and the astronauts were celebrities. I remember many an afternoon in front of the TV watching grainy photos of U.S. Navy divers jumping from helicopters to secure the just returned from space capsule and release the astronauts for the short ride back to the nearby aircraft carrier. For me, interest in space never led to a passion for science which is regrettable – we certainly need more scientists or at least science-literate citizens. Space exploration to me was channeled into another part of the Cold War, something that was omnipresent in my youth and younger adult years.

On Thursday, when a few bursts of breaking news amidst the downpour Where in the World is Ted Cruz updates, I read that NASA had succeeded in depositing a functioning spacecraft on the surface of Mars, it made me feel a small charge of excitement and nostalgia too.

It also made me recall a blog post from ten years ago by Andrew Howe about the final Space Shuttle Mission. I’ve reproduced that post below: 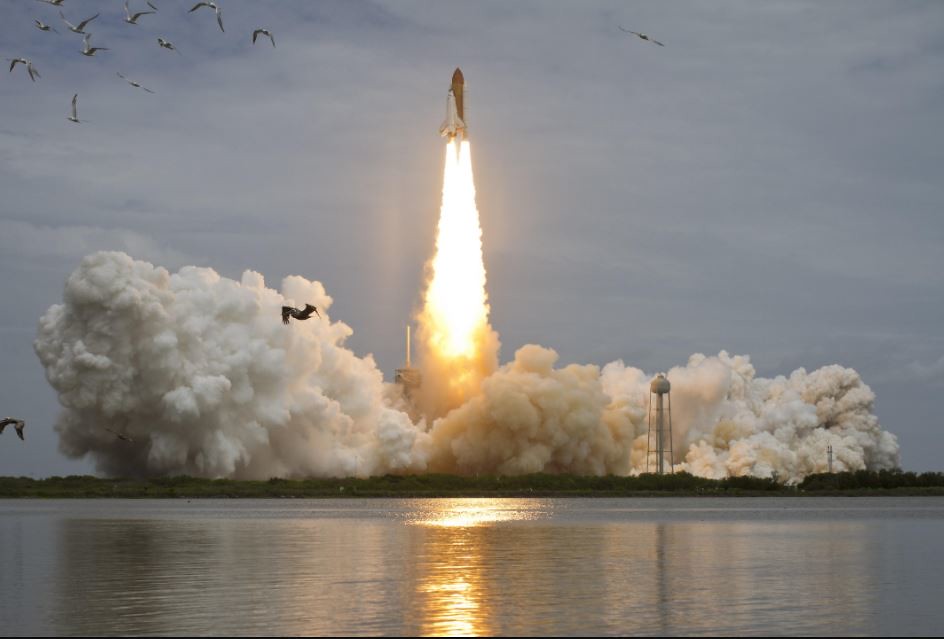 On Friday July 8, 2011 at 11:26 a.m., NASA will launch the space shuttle Atlantis on STS-135, the final shuttle mission. It marks the end of an era that began on April 12, 1981 with the first flight of Columbia. One hundred thirty-five missions later, America’s fourth great space program, the successor to Mercury, Gemini, and Apollo, has come to its end.

I was born between STS-31 and STS-41, the 35th and 36th shuttle missions, both flights of the shuttle Discovery. STS-31 was the mission to deploy the Hubble Telescope. I have never known anything but the shuttle program. I have taken it for granted. I cannot imagine it being over. But after tomorrow, the United States will no longer have the ability to put astronauts into orbit. We will be reliant on Russian Soyuz rockets for the foreseeable future. Not only is there no plan to replace the shuttle, but now Congress is preparing to cancel the Webb Telescope, the successor to the Hubble, which would take us back even closer to the Big Bang.

The shuttle is the most complicated machine ever built, consisting of over a million moving parts. The time and work involved in preparing a shuttle for launch is unimaginable. The shuttles have given us the Hubble, the International Space Station, and more technological and scientific breakthroughs than most of us will ever realize.

In the early 1990s, Congress halted plans to build a supercollider in Texas, opening the door for Europe’s CERN to build the largest supercollider in the world. Cutting-edge particle physics is now done in Europe. European labs will be the ones to unlock the next great secrets of the fundamental building blocks of nature. Now the future of both American astronomy and cosmology, in the form of the Webb telescope and spaceflight are in question. At a time when more and more countries are developing the means to reach space, we have focused our attention elsewhere. It could be said that we have greater priorities and that a space program is simply too expensive for our time. But we know that the Apollo program gave back far more to the economy than the government spent. We also know that many of the greatest discoveries in science were mere accidents, the results of exploration for exploration’s sake.

However, for my generation, there is a more important argument to be made. The shuttles represented one of America’s greatest achievements. They were a symbol of national pride and an inspiration to us all. Now where will that inspiration come from? How inspired will we feel when it is Chinese astronauts, not American, who become the first humans to land on Mars? Will we stand idly by while the other nations of the world surpass us in technical capability? The future of NASA remains uncertain as does the future of the entire American scientific community. Our schools are failing to teach students basic science. Half of our graduate students in science and engineering are foreigners.

When President Kennedy gave his famous speech in 1961, declaring that, by the end of the decade, the United States would put a man on the Moon, we did not have the rockets to get there. We did not have a design for a lunar lander, never mind had we built one. We had not even yet put a man into space. My hope is that another President Kennedy will step forward and call on us to surpass what we think is possible. But, in the meantime, you can watch Friday’s launch on NASA’s website. NASA has also released an amazing documentary about the shuttle program. I urge you to watch both. They mark the end of one of the finest periods in American history. They also mark the end of one of the greatest scientific achievements in human history.