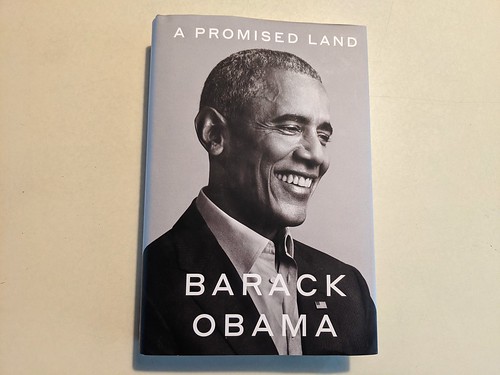 “A Promised Land” by Barack Obama

A recent Op-Ed by psychologist Adam Grant introduced me to the concept of “motivational interviewing” (“The Science of Reasoning With Unreasonable People,” New York Times, January 31, 2021). Set in the context of arguing about vaccinations with a committed anti-vaccer, motivational interviewing uses open-ended questions and careful listening to “hold up a mirror so they can see their own thoughts more clearly” and hopefully begin questioning and perhaps reversing their own firmly held beliefs. Grant points out that a head-on attack on a strongly-held belief, however wrong it may be, (1) doesn’t result in a change of belief and (2) usually causes the person’s (incorrect) belief to grow stronger. This more oblique approach doesn’t always work but it frequently does get the person to acknowledge that the issue in dispute is far more complex than they have previously acknowledged.

Reading this Op-Ed caused me to conclude that President Barack Obama’s best selling memoir, A Promised Land, is, in a way, an exercise in “motivational interviewing” for progressives. Obama analyzes the major policy issues of the first term of his presidency with an unwavering acknowledgement of Republican intransigence, but he also spends equal or more space explaining why liberal touchstones like Medicaid for All were not achievable during his presidency.

This is not to say the book is a series of excuses for things not accomplished. Instead, it is a message that governing is hard and the issues are complex, and anyone who believes otherwise regardless of their political ideology is part of the problem.

Obama’s first book, Dreams From My Father, covered his early life through college (Occidental then Columbia) to his work as a community organizer in Chicago and ended with his arrival at Harvard Law School. A Promised Land begins with his election to the Illinois State Senate in 1997.

In the State Senate, the future President soon realized that a new state senator had very little clout. However, a more powerful senator became a mentor and helped Obama garner some accomplishments. Obama also learned from his Republican opponents in the Illinois legislature. He found almost all of them to be decent people who would quietly make deals to get things done even if publicly they would whine about their political opponents. This gave individual senators cover with their hard core constituents but still allowed the senate to legislate effectively.

Regarding his life outside of politics at this stage, Obama was an early participant in the gig economy. Besides serving as a state senator, he was an adjunct faculty member at University of Chicago Law School and was associated with a law firm that handled civil rights cases, especially at the appellate level. (One gets the impression that Obama never spent a lot of time in Chicago’s equivalent of the Lowell District Court).

Through all of this, Michelle had given birth to their two daughters and with Barack always off in Springfield (the state capital where the legislature sat) or writing legal briefs or teaching classes, the responsibilities of child care fell heavily on her despite her working full time as an administrator at a Chicago hospital. Obama’s solution to the “we can’t keep living like this” vibe of their marriage was – to run for Congress against the rumored to be under investigation but never-indicted incumbent. Obama lost.

Michelle needn’t have worried because Barack had Plan B. He would now run for the U.S. Senate. (I had already held Michelle Obama in the highest esteem but that only increased after reading this book). His timing was impeccable because both the Democratic favorite and the Republican nominee, deeply into their respective campaigns, faced domestic violence charges. Obama won easily.

In fact, before he was actually elected to the U.S. Senate in the fall of 2004, Obama was chosen by Democratic Presidential nominee John Kerry to give the keynote address at that year’s Democratic National Convention. Overshadowing everyone with his stellar speech, including nominee Kerry, Obama became a national figure. Arriving in Washington in January 2005, Obama chose as his Senate model Hillary Clinton who despite her high profile as a former First Lady, spent her early years in the Senate avoiding national TV and building expertise and the respect of colleagues by diligently doing committee work.

For Obama, that approach didn’t last long. He and others sensed that for the 2008 presidential race, the electorate wanted something new, something different. With the encouragement of Harry Reid, Chuck Schumer, and many others, Obama got in that race and won.

The second half of this 700 page book is about that first term as President. A big part of it was rescuing the economy which included saving the big automakers from bankruptcy. Here you will find many “this is why we couldn’t send all the slick bond traders to jail” explanations. This is also when it became clear to Obama that the Republicans in Congress weren’t interested in making the government work; they were interested in preventing him from getting anything done. He wasn’t in Springfield, anymore.

Despite this clear-eyed recognition of Republican sabotage, Obama felt obliged to genuflect at the altar of bipartisanship when tackling health care. While he doesn’t explicitly say it, had Ted Kennedy not developed a fatal brain tumor, the legislation that created Obamacare would have (1) been better than it was and (2) would have had stronger support. With Kennedy out of the picture, leadership in the Senate on healthcare fell to the next most senior Democratic Senator on the finance committee, Max Baucus, a conservative Democrat from Montana. Through the summer of 2010, Baucus assured Obama that he would win over Chuck Grassley and other Republicans; he only needed a little more time and a few more concessions. With the legislative clock about to run out, Obama finally acknowledged that no Republican would go along with this proposal, even if they were permitted to draft 100% of it, so he pivoted to a Democrats-only bill. But then Ted Kennedy died and the voters of Massachusetts elected Republican Scott Brown to replace him.

As Obama explains it, “our magic, filibuster-proof hold on the Senate” was placed in the hands of Martha Coakley, the Democratic nominee in the Massachusetts special election to fill the seat vacated by Kennedy’s death. Coakley “had maintained a steady, double-digit lead over her Republican opponent, a little-known state senator named Scott Brown. With the race seemingly well in hand, my team and I spent the first two weeks of January preoccupied by the challenge of brokering a health care bill acceptable to both House and Senate Democrats.”

I felt good about our prospects. That is, until the afternoon I stopped by Axelrod’s small office and found him and Messina leaning over a computer like a pair of doctors examining the X-rays of a terminal patient.

“We’ve got problems in Massachusetts.”

They explained that our Senate candidate, Martha Coakley, had taken the race for granted, spending her time schmoozing elected officials, donors, and labor bigwigs rather than talking to voters. To make matters worse, she’d taken a vacation just three weeks before the election, a move the press had roundly panned. Meanwhile, Republican Scott Brown’s campaign had caught fire.”

All politics is local. It goes on like that for another page and a half. With Scott Brown’s election and only 59 Senate Democratic votes, many of Obama’s advisors recommended pulling the plug on health care and moving onto something else. But then two heroes emerged. Harry Reid and Nancy Pelosi figured out how to get Obamacare through Congress.

This volume ends with the Special Ops raid that killed Osama bin Laden. Obama has high praise for those who conducted the operation but he ends on a melancholy note observing that through his entire first term the only thing that garnered a unified response of celebration from the country was the killing of a foreign terrorist in a faraway place. Everything else – saving the economy from another Great Depression, rescuing the American automobile industry from collapse, expanding health care to millions of uninsured – all seemed to further divide the country.

Obama writes with great clarity and provides rich detail. The early parts of this book went somewhat slowly due, I think, to him cramming a lot of life into not-many-pages of text. But momentum quickly builds and, starting with his 2008 presidential campaign, the book is hard to put down.

One Response to Review of President Obama Memoir